300 Million CCTV's Operate in China. Beijing Judging Every Resident Based on Behavior. China’s plan to judge each of its 1.3 billion people based on their social behavior is moving a step closer to reality, with Beijing set to adopt a lifelong points program by 2021 that assigns personalized ratings for each resident. 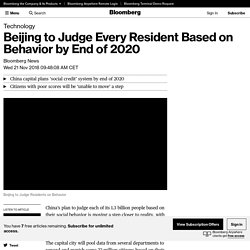 The capital city will pool data from several departments to reward and punish some 22 million citizens based on their actions and reputations by the end of 2020, according to a plan posted on the Beijing municipal government’s website on Monday. Those with better so-called social credit will get “green channel” benefits while those who violate laws will find life more difficult. The Beijing project will improve blacklist systems so that those deemed untrustworthy will be “unable to move even a single step,” according to the government’s plan. Xinhua reported on the proposal Tuesday, while the report posted on the municipal government’s website is dated July 18. Ambitious Plan The final version of China’s national social credit system remains uncertain. Concerns as Personal Info Supplanting Money as a Currency. In mid-February, Facebook CEO Mark Zuckerberg published his “Building Global Community” manifesto, in which he called for “supportive,” “safe,” “informed,” “civically engaged” and “inclusive” communities. 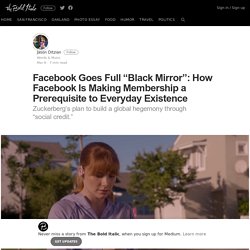 Which sounds lofty and benevolent, yet if you read between the lines, the message is: we want to own all the data of all the interpersonal/community interactions in the world and profit off of them through advertising and other as-yet-unveiled value-added propositions. (Facebook Bucks, anyone?) Facebook launched a few years after I graduated from college, so I guess this makes me an old fuddy-duddy—an old fuddy-duddy who doesn’t want a corporation like Facebook owning my most sensitive personal info. Somehow, this sentiment not only puts me in the minority of the connected world, but also it increasingly marginalizes me in my everyday interactions. I was OK with missing the occasional baby announcement. Paradise Lost However, City CarShare was recently bought by a corporation, Getaround.

Nothing is Owned & Privacy is a Luxury. For more information watch the What If: Privacy Becomes a Luxury Good? 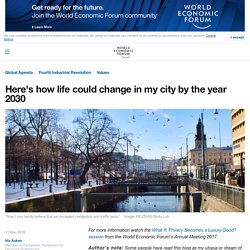 Session from the World Economic Forum's Annual Meeting 2017. Author's note: Some people have read this blog as my utopia or dream of the future. It is not. It is a scenario showing where we could be heading - for better and for worse. I wrote this piece to start a discussion about some of the pros and cons of the current technological development. Welcome to the year 2030. It might seem odd to you, but it makes perfect sense for us in this city. First communication became digitized and free to everyone. Sometimes I use my bike when I go to see some of my friends.

"Environmental problems seem far away" In our city we don't pay any rent, because someone else is using our free space whenever we do not need it. Once in awhile, I will choose to cook for myself. This also made the breakthrough of the circular economy easier. The death of shopping Shopping? "They live different kinds of lives outside of the city" Written by. Driverless Car Videos a Key Law Enforcement Tool. A full autonomous road system changes traffic less from fluid dynamics than from circuit-switched to packet-switched, or, more precisely, from TDMA to CDMA. 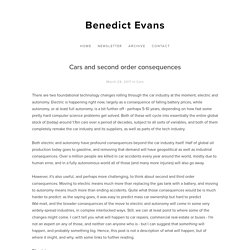 No lanes, no separation, no stopping distances, and no signals, (except of course for pedestrians to cross), means profoundly different traffic patterns. Clearly, all of this will have some effect on congestion and road capacity. Accidents themselves cause as much as a third of congestion (estimates vary a fair bit and depend whether you're talking about highways or city centres), even if there are no changes from different driving behavior. How much changes over all, though - how much more traffic can a highway hold? How much more quickly do you get to school in the morning if you drive at the same speed but don't have to stop at every stop sign just in case there's someone there? OECD on causes of congestion, phantom jams, transport in London (congestion on page 170) Los Angeles parking.

Then, of course, there are the drivers.