Ellen's Monologue - Attention Span + Dance. Causes of Short Attention Span. Tess Thompson A short attention span is a much greater problem than just not being able to concentrate on something. The issue needs far more serious thought than it is given today. One of the common causes of a short attention span in children and some adults is the delayed development of the brain. This developmental problem or immaturity, if you like, is known as Attention Deficit Disorder. It is characterized by an impaired ability to learn, to listen, to wait for one's turn or to complete a task. Attention Deficit Disorder or hyperactivity affects less than 5% children. The way society has evolved is equally to blame. The fact is that our capacities to communicate and understand have been seriously hampered.

If a child is born with a hereditary short attention span and inability to focus, parents and teachers should provide support by extending external controls. References: Active Learning / Attention Span. Welcome to the Journal of Engineering Education (JEE), the research journal for engineering education. 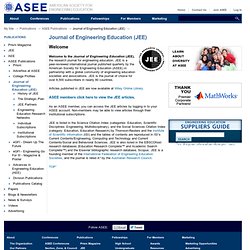 JEE is a peer-reviewed international journal published quarterly by the American Society for Engineering Education (ASEE) in partnership with a global community of engineering education societies and associations. JEE is the journal of choice for over 8,500 subscribers in nearly 80 countries. Articles published in JEE are now available at Wiley Online Library. ASEE members click here to view the JEE articles. As an ASEE member, you can access the JEE articles by logging in to your ASEE account. A New Look at Student Attention Spans.

December 4, 2009 By: Maryellen Weimer, PhD in Instructional Design Have you heard that advice about chunking content in 10- to 15-minute blocks because that’s about as long as students can attend to material in class? 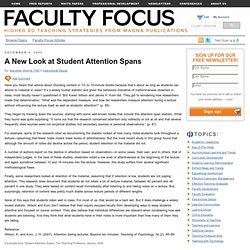 It’s a widely touted statistic and given the behaviors indicative of inattentiveness observed in class, most faculty haven’t questioned it. But Karen Wilson and James H. Korn did. They began by tracking down the sources, starting with some well-known books that include this attention span statistic. For example, some of the research cited as documenting the statistic looked at how many notes students took throughout a lecture—assuming that fewer notes meant lower levels of attentiveness. Lectures.

Lecture: "The process by which the notes of the lecturer become the notes of the student without passing through the mind of either" The lecture is still the standard teaching event in higher education—although nowhere else—and thus an illustration of Atherton's law, "The amount of attention paid to teaching and learning is in inverse proportion to the perceived ability of the students. 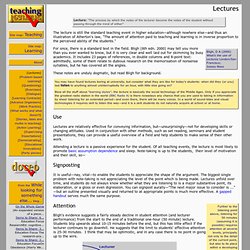 " Bligh, D A (2000) What's the use of Lectures London/San Francisco; Jossey-Bass For once, there is a standard text in the field. Bligh (6th edn. 2000) may tell you more than you ever wanted to know, but it is very clear and well laid out for skimming by busy academics. It includes 23 pages of references, in double columns and 8-point text: admittedly, some of them relate to dubious research on the memorisation of nonsense syllables, but he has covered all the angles. These notes are unduly dogmatic, but read Bligh for background. Self Tests by Psychology Today. 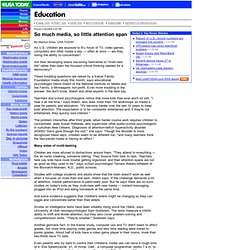 Are their developing brains becoming hard-wired to "multi-task lite" rather than learn the focused critical thinking needed for a democracy? These troubling questions are raised by a Kaiser Family Foundation media study this month, says educational psychologist David Walsh of the National Institute on Media and the Family, a Minneapolis non-profit. Even more troubling is the answer: We don't know, Walsh and other experts in the field say. Teachers and school psychologists notice that more kids than ever won't sit still. The problem intensifies after third grade, when harder course work requires children to concentrate, adds Susan Ratteree, who supervises other public-school psychologists in suburban New Orleans. 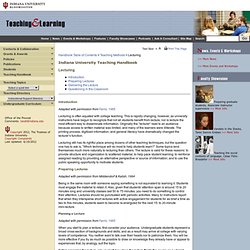 Statistiques et rapports - AQICEBS. Students only have '10-minute attention span' University students have average attention spans of just 10 minutes and many miss lectures because of the need for part-time jobs, research suggests. 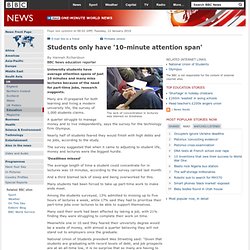 Many are ill-prepared for both learning and living a modern university life, the survey of 1,000 students claims. A quarter struggle to manage money and to live independently, says the survey for the technology firm Olympus. Nearly half of students feared they would finish with high debts and no jobs, according to the study. The survey suggested that when it came to adjusting to student life, money and lectures were the biggest hurdle. 'Deadlines missed' The average length of time a student could concentrate for in lectures was 10 minutes, according to the survey carried last month. And a third blamed lack of sleep and being overworked for this.

Related:  Jeux intelligents   -  fonctions exécutives, mémoire etc   -  L'attention des élèves   -  tdah solutions   -  attention   -  Coaching scolaire   -  TDAH   -  stratégies   -  Piaget was wrong (development and cognition over a life span)   -  Attention   -  Oscar Pistorius trial grabs the world's attention   -  Attention and Intention   -  Attention   -  The Focusing Institute   -  Monk Mind: How to Increase Your Focus : zenhabits   -  The Psychology of Flow (in under 300 words) — PsyBlog   -  How to Train Your Brain to Stay Focused | Entrepreneur.com   -  Why Focus Makes Us Smarter--and 8 Ways to Sharpen Yours | Big Think   -  What the Internet is Doing to Our Brains [Epipheo.TV] - YouTube   -  How to Stay Focused When You Get Bored Working Toward Your Goals   -  Mihaly Csikszentmihalyi: Flow, the secret to happiness   -  Train Your Brain for Monk-Like Focus   -  How to Focus A Wandering Mind, by Wendy Hasenkamp   -  Stop Wasting Time on Things that Don't Have a Purpose in Your Life   -  Warren Buffett's "2 List" Strategy: How to Maximize Your Focus and Master Your Priorities   -  Time Blocking -- The Secret Weapon For Better Focus   -  The Secret to Productivity: Focus | Personal Branding Blog - Stand Out In Your Career   -  To Stay Focused, Manage Your Emotions - HBR   -  Andrew Sullivan: My Distraction Sickness — and Yours   -  Strategies to Help Students ‘Go Deep’ When Reading Digitally | MindShift | KQED News   -  Education   -  Enterprise