The year 2014 year will also be remembered as the year the world came to a still and focused on the much-talked about Oscar Pistorius trail in the North Gauteng High Court in Pretoria.

The world renowned paralympian went from hero to zero when he, on the fateful morning of February, 13, 2013, he shot and killed his model girlfriend, Reeva Steenkamp, on his own version, thinking she was an intruder. 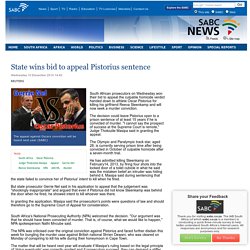 The decision could leave Pistorius open to a prison sentence of at least 15 years if he is convicted of murder. "I cannot say the prospect of success at the Supreme Court is remote," Judge Thokozile Masipa said in granting the appeal. The Olympic and Paralympic track star, aged 28, is currently serving prison time after being convicted in October of culpable homicide after a seven-month trial.

He has admitted killing Steenkamp on February14, 2013, by firing four shots into the locked door of a toilet cubicle in what he said was the mistaken belief an intruder was hiding behind it. South Africa's National Prosecuting Authority (NPA) welcomed the decision. Oscar Pistorius verdict appeal: 9 December 2014. Too much mercy for Oscar: Nel (with image, tweets) · sabcnewsonline. Youtube. We will never get closure: Reevas mother:Friday 21 November 2014. 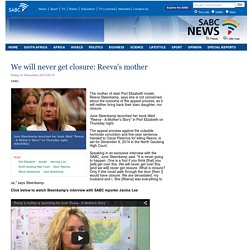 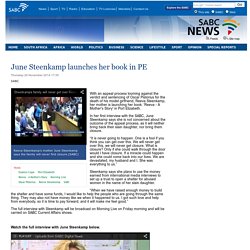 (SABC) With an appeal process looming against the verdict and sentencing of Oscar Pistorius for the death of his model girlfriend, Reeva Steenkamp, her mother is launching her book: 'Reeva - A Mother's Story' in Port Elizabeth. In her first interview with the SABC, June Steenkamp says she is not concerned about the outcome of the appeal process, as it will neither bring back their slain daughter, nor bring them closure. “It is never going to happen. One is a fool if you think you can get over this. Steenkamp says she plans to use the money earned from international media interviews to set up a trust to open a shelter for abused women in the name of her slain daughter. Steenkamps family will never get over Reeva's death: June Steenkamp. 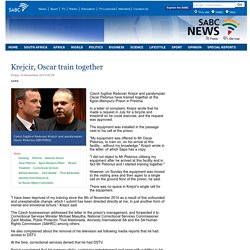 (REUTERS) Czech fugitive Radovan Krejcir and paralympian Oscar Pistorius have trained together at the Kgosi Mampuru Prison in Pretoria. In a letter of complaint, Krejcir wrote that he made a request in July for a bicycle and treadmill so he could exercise, and the request was approved. The equipment was installed in the passage next to his cell at the prison. "My equipment was offered to Mr Oscar Pistorius, to train on, on his arrival at this facility... without my knowledge," Krejcir wrote in the letter, of which Sapa has a copy. "I did not object to Mr Pistorius utilising my equipment after he arrived at this facility and in fact Mr Pistorius and I started training together. " However, on Sunday the equipment was moved to the visiting area and then again to a single cell on the ground floor of the prison, he said. 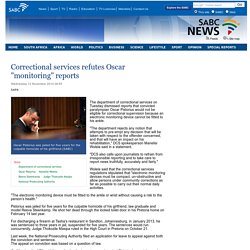 (SABC) The department of correctional services on Tuesday dismissed reports that convicted paralympian Oscar Pistorius would not be eligible for correctional supervision because an electronic monitoring device cannot be fitted to his ankle. "The department rejects any notion that attempts to pre-empt any decision that will be taken with respect to the offender concerned, and that will have an impact on his rehabilitation," DCS spokesperson Manelisi Wolela said in a statement. "DCS also calls upon journalists to refrain from irresponsible reporting and to take care to report news truthfully, accurately and fairly. " Wolela said that the correctional services regulations stipulated that "electronic monitoring devices must be compact, un-obstructive and allow persons under community corrections as far as possible to carry out their normal daily activities. 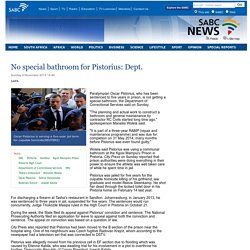 "The planning and actual work to construct a bathroom and general maintenance by contractor RC Civils started long time ago," spokesperson Manelisi Wolela said. "It is part of a three-year RAMP (repair and maintenance programme) and was due for completion on 31 May 2014, many months before Pistorius was even found guilty. " Wolela said Pistorius was using a communal bathroom at the Kgosi Mampuru Prison in Pretoria. City Press on Sunday reported that prison authorities were doing everything in their power to ensure the athlete was well taken care of while he spent time in jail. Pistoriuss lawyers oppose verdict, jail sentence appeal :Friday 7 November 2014. 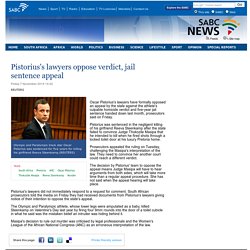 (REUTERS) Oscar Pistorius's lawyers have formally opposed an appeal by the state against the athlete's culpable homicide verdict and five-year jail sentence handed down last month, prosecutors said on Friday. Pistorius was sentenced in the negligent killing of his girlfriend Reeva Steenkamp after the state failed to convince Judge Thokozile Masipa that he intended to kill when he fired shots through a locked toilet door at his luxury Pretoria home. NPA appeals Pistorius sentence, awaits date:Tuesday 4 November 2014. Oscar Pistorius was jailed for five years for the culpable homicide of his girlfriend Reeva Steenkamp. 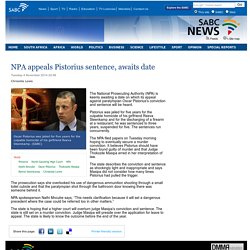 (SABC) The National Prosecuting Authority (NPA) is keenly awaiting a date on which its appeal against paralympian Oscar Pistorius's conviction and sentence will be heard. Pistorius was jailed for five years for the culpable homicide of his girlfriend Reeva Steenkamp and for the discharging of a firearm at a restaurant; he was sentenced to three years, suspended for five. The sentences run concurrently. The NPA filed papers on Tuesday morning hoping to eventually secure a murder conviction. The state describes the conviction and sentence as shockingly light and inappropriate and says Masipa did not consider how many times Pistorius had pulled the trigger.

The prosecution says she overlooked his use of dangerous ammunition shooting through a small toilet cubicle and that the paralympian shot through the bathroom door knowing there was someone behind it. State appeals Oscar conviction, sentence:Tuesday 4 November 2014. Oscar Pistorius is serving five years in prison. 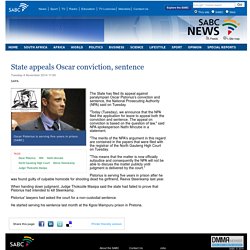 (SABC) The State has filed its appeal against paralympian Oscar Pistorius's conviction and sentence, the National Prosecuting Authority (NPA) said on Tuesday. "Today (Tuesday), we announce that the NPA filed the application for leave to appeal both the conviction and sentence. The appeal on conviction is based on the question of law," said NPA spokesperson Nathi Mncube in a statement. "The merits of the NPA's argument in this regard are contained in the papers that were filed with the registrar of the North Gauteng High Court on Tuesday. Dept considering disciplinary against Pistorius witness:Monday 27 October 2014. Annette Vergeer testified during sentencing proceedings for Pistorius in the High Court in Pretoria. 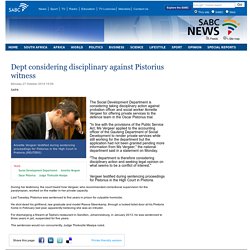 (REUTERS) The Social Development Department is considering taking disciplinary action against probation officer and social worker Annette Vergeer for offering private services to the defence team in the Oscar Pistorius trial. "In line with the provisions of the Public Service Act, Ms Vergeer applied to the accounting officer of the Gauteng Department of Social Development to render private services while still working for the department but the application had not been granted pending more information from Ms Vergeer," the national department said in a statement on Monday.

"The department is therefore considering disciplinary action and seeking legal opinion on what seems to be a conflict of interest. " Oscar judgment not well reasoned: Expert:Friday 24 October 2014. Oscar Pistorius was sentenced to five years. (SABC) The judgment in the Oscar Pistorius trial is not well reasoned and can be appealed on a question of law, a legal expert said on Friday. "In my view that judgment isn't very well reasoned and I also don't think it would stand up to constitutional scrutiny," Wits law professor James Grant said.

However, the State could encounter a "hurdle" because of the Supreme Court of Appeal case, State vs Seekoei, which limited the State's right of appeal. The 1982 Seekoei case held that the State could not appeal if a conviction was made on a competent verdict. "The Pistorius judgment was a competent verdict, he was acquitted of murder and convicted on a competent verdict," Grant said. If the NPA could overcome the Seekoei issue and is given the opportunity to appeal, two things could happen. "retrial is not impossible," he said. Correctional Services refuses to comment on reports of Oscars crying:Thursday 23 October 2014. Oscar Pistorius was sentenced to prison for five years for the culpable homicide of his girlfriend Reeva Steenkamp(REUTERS) The Correctional Services Department on Thursday declined to comment on a report that convicted paralympian Oscar Pistorius wept himself to sleep on his first day in prison.

"We have never given a blow-by-blow account of how an offender is progressing on a day to day basis," department spokesperson Manelisi Wolela said. "We have never done that for other offenders and we won't do that for him. " The Times quoted sources as saying that Pistorius cried quite a bit before falling asleep at the Kgosi Mampuru Prison in Pretoria on his first night there. "You could hear him. He would begin a 21-day risks and needs assessment The newspaper reported that his routine in prison would include waking up at 5.30am daily, eating breakfast at 7am, lunch at noon and dinner at 4pm - all in his cell. Unprecedented social media reaction to Oscar Pistorius sentencing:Wednesday 22 October 2014.

June Steenkamp lives in Port Elizabeth. (REUTERS) The ANC Women's League is footing the bill for June Steenkamp's travel and accommodation costs allowing her to attend the Oscar Pistorius murder trial, Beeld reported on Tuesday. "She will attend the trial for as long as the ANC Women's League is able to pay for her travel and accommodation costs," Steenkamp's lawyer, Dup de Bruyn, told the Afrikaans daily. Pistorius is charged with the murder of her daughter, Reeva Steenkamp, who he shot dead on Valentine's Day last year. He has pleaded not guilty in the High Court in Pretoria, saying the shooting was an accident.

Gauteng African National Congress Women's League spokesperson Jacqui Mofokeng confirmed to Beeld that they were paying with the help of the Progressive Women's Movement of SA and individual donations. "We are doing this so that she can get some closure," said Mofokeng. Steenkamp lives in Port Elizabeth. Pistorius testifies that he and family have been victims of crime :Monday 7 April 2014.

Pistorius sent for evaluation at Pretoria psychiatric hospital:Tuesday 20 May 2014. Pistorius to be an outpatient at Weskoppies Hospital.

Related:  sabcnewsonline   -  Oscar Niemeyer   -  Attention   -  Related articles: The spotlight back on Oscar Pistorius   -  Attention and Intention   -  Attention   -  Scopes Trial   -  Niemeyer   -  The International Focusing Institute   -  Monk Mind: How to Increase Your Focus : zenhabits   -  The Psychology of Flow (in under 300 words) — PsyBlog   -  Why Focus Makes Us Smarter--and 8 Ways to Sharpen Yours | Big Think   -  What the Internet is Doing to Our Brains [Epipheo.TV] - YouTube   -  How to Stay Focused When You Get Bored Working Toward Your Goals   -  Train Your Brain for Monk-Like Focus   -  How to Focus A Wandering Mind, by Wendy Hasenkamp   -  Stop Wasting Time on Things that Don't Have a Purpose in Your Life   -  Warren Buffett's "2 List" Strategy: How to Maximize Your Focus and Master Your Priorities   -  Time Blocking -- The Secret Weapon For Better Focus   -  The Secret to Productivity: Focus | Personal Branding Blog - Stand Out In Your Career   -  To Stay Focused, Manage Your Emotions - HBR   -  Education   -  Enterprise