To Stay Focused, Manage Your Emotions 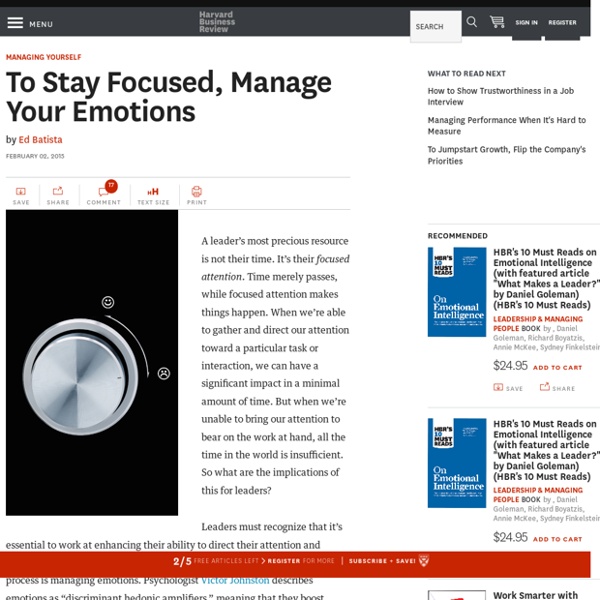 A leader’s most precious resource is not their time. It’s their focused attention. Time merely passes, while focused attention makes things happen. When we’re able to gather and direct our attention toward a particular task or interaction, we can have a significant impact in a minimal amount of time. But when we’re unable to bring our attention to bear on the work at hand, all the time in the world is insufficient. So what are the implications of this for leaders? Leaders must recognize that it’s essential to work at enhancing their ability to direct their attention and minimize unhelpful distractions, and one of the most important steps in this process is managing emotions. Consequently, awareness and regulation of our emotions are central to the productive use of our attention. Build Capacity. While these activities are often enjoyable in themselves, they aren’t indulgences–they’re investments in our ability to operate at peak effectiveness. Plug Leaks. Create Space. Related:  Focus • value network

Zanshin: Learning the Art of Attention and Focus From a Legendary Samurai Archer In the 1920s, a German man named Eugen Herrigel moved to Japan and began training in Kyudo, the Japanese martial art of archery. Herrigel was taught by a legendary Kyudo master named Awa Kenzo. Kenzo was convinced that beginners should master the fundamentals of archery before attempting to shoot at a real target and he took this method to the extreme. When he was finally allowed to shoot at targets on the far end of the practice hall, Herrigel’s performance was dismal. Kenzo paused for a moment and then said, “Come to see me this evening.” Archery, Blindfolded After night had fallen, the two men returned to the courtyard where the practice hall was located. Immediately, Kenzo drew a second arrow and again fired into the night. Everything Is Aiming Great archery masters often teach that “everything is aiming.” Zanshin is a word used commonly throughout Japanese martial arts to refer to a state of relaxed alertness. In practice, though, zanshin has an even deeper meaning. Read Next

How digitally engaged is your organisation? How can you tell your boss that your organisation is lagging behind in the adoption of internal social media? Or how do you know how well you are succeeding compared to other organisations in your sector? The SMiLE Index (Social Media in the Large Enterprise) is the most comprehensive and accurate analysis available - and it's free for all to use. Engage for Success, a movement committed to the idea that there is a better way to work has launched a Social Media and Digital Engagement Network dedicated to applying new social enterprise tools in the quest for building employee engagement. The first part of their work is to support the SMiLE Index as the diagnostics tool for you to use to benchmark your own organisation against others on the digital index. The Index helps you assess where your organisation is on its journey towards a collaborative internal social network. Are your colleagues co-creating across the silos or are they stifled by the hierarchy? How the Index works

The ONE Thing: How to Get Things Done Using The Focusing Question Source: PicJumbo. On June 23, 1885, Andrew Carnegie stood before a room of wide-eyed students at Curry Commercial College and addressed the audience. “‘Don’t put all your eggs in one basket’ is all wrong” he said. [1] Carnegie, then 49 years old, was at his peak of success: his company, the Carnegie Steel Company, was the largest and most profitable company in the world. “I tell you ‘put all your eggs in one basket, and then watch that basket’” counselled Carnegie, “Look round you and take notice; men who do that do not often fail”. The question is: which basket do you watch? The Power of Questions We’re all guilty on occasion of going through life devaluing the importance of thinking about and deciding on the kind of life we want to live. We daydream about dieting, starting a business and running a marathon, but do little to make our goals happen or worse, blame our circumstances and do nothing at all. People who live extraordinary lives simply ask themselves better questions. . . . . . .

How Accelerators Lead Digital Transformation More CEOs are setting bold IT innovation goals for their company. Meanwhile, CIOs are tasked to quickly build the required business technology infrastructure. What’s the primary motivation? The growing expectation that all leading organizations will achieve their key strategic business objectives via superior IT-enabled advancements. In fact, a recent study found that 55 percent of survey respondents said their environment will be changed ‘significantly’ — 20 percent actually said it will be ‘completely transformed.’ The apparent benefits extend beyond the traditional commercial enterprise. The HBR survey respondents also said that IT-enabled innovation would change the way employees do their work (48 percent significantly changed; 15 percent completely transformed), the company’s products/services (46 percent changed; 11 percent transformed), and business models (42 percent changed; 13 percent transformed). Why Some Organizations Surge Ahead of Their Peers

Jeff Weiner On How To Focus And Get The Right Things Done Source: PicJumbo. If you want to be successful in life and work, you have to learn how to lead. But before you can lead others, you have to lead by example. Jeff Weiner, founder of LinkedIn, has a powerful mechanism for leadership: he has FOCUS (a.k.a. But Weiner’s philosophy isn’t only applicable to running a successful social networking company; it’s applicable to behaviour change as well. Let’s discuss how. F: Fewer Things Done Better “When [Weiner] took the reins of [LinkedIn] he could easily have adopted the standard operating procedure of most Silicon Valley start-ups and tried to pursue everything”, writes Greg McKeown in Essentialism: The Disciplined Pursuit of Less. Learning new behaviours and Tiny Habits is exciting – especially when you’re new to it. Instead of stopping and starting new habits as and when you feel motivated, focus on ONE and “show up” consistently. Build a Tiny Habit by making it so easy you can’t say no and count the number of days you do it, consecutively.

The Procrastination Matrix Note: To best understand this post, you should first read Part 1 of Wait But Why’s previous post on procrastination. PDF: We made a fancy PDF of this post for printing and offline viewing. Buy it here. Back in high school, if you had asked me if I was a procrastinator, I would have said yes. Except I wasn’t. There was definitely an Instant Gratification Monkey in my head, but he was cute more than anything. One day, high school ended, and so did my life as a somewhat normal-acting person. Without deadlines to occupy him, my Panic Monster, who can’t think too far ahead, began to spend a lot of time in hibernation. The more the Panic Monster slept, the more confidence the monkey gained. The RDM would slip further into despair, and only the times when things reached their most dire would anything change. It didn’t matter how obvious a decision seemed to the RDM, it was becoming clear that he was totally unable to control the monkey without the Panic Monster’s help. 1) The Disastinators

Super-Focus: 10 Natural Steps to Nurture Your Attention How to deal with interruptions, structure your environment, enter a flow state and much more… “Pay attention. It’s all about paying attention. 1. It might seem strange to start a series of pointers on building attention with the directive to stop paying attention… …actually not. You can only concentrate efficiently for a certain period of time. A good general rule, though, is that most people’s ability to focus on anything starts to waver after the length of a typical sitcom: 20 minutes or so. After that, it’s time to take a short break and recharge the attentional batteries. By building in regular breaks for your attention, you’ll be able to concentrate more in the long-run. 2. Since attention only lasts a certain period, it’s good practice to chunk down whatever you’re doing. It helps to boost motivation if there’s a smaller task to be completed in a manageable block of time that contributes to your overall goal. 3. 4. But, whatever the right environment is for you, go there. 5. 6. 7. 8. 9.

Why The Next App You Use Might Be In A Social Network While social networks are still just getting their sea legs in most organizations, the next big leap forward -- in addition to social analytics -- is likely to be the integration of our productivity and line of business apps into our activity streams. Will this unleash significant new value? Very probably. But it's also possibly the big integration opportunity that businesses have long looked for. Even though the popularity of social networks has grown to the point that it's a primary way that we engage with each other, just like e-mail, telephone, or face-to-face conversation, we are still learning to make the most of them. How social media relates to the myriad systems of record that we have in the workplace or in our personal lives is another significant question. Like software mashups attempted to address a few years ago, we instinctively know that there should not be a contextual gap between our individual use of applications and the overall work process we're engaging in. 1. 2.

Living Through Life's Challenges: An Interview with a Ninja Black Belt Life is full of ups and downs. Yes, this is absolutely true. But the question is what can help us live through the difficulties with greater ease and even find the joy in everyday life. Mindfulness is one of those tools, but how about zen practice or ninja training? Dr. Richard Sears is full-time core faculty member of the Psy.D. You can see maybe why I wanted to bring him here today to talk about why mindfulness is helpful for our present day maladies, a helpful tool from Zen practice, and what we can learn from ninja training to get out of our heads and into our lives. Elisha: Why is mindfulness so effective in working with our personal mental, emotional and physical maladies? Richard: I begin to feel like a snake oil salesman when I talk about all the research demonstrating the benefits of mindfulness, but the key factor is awareness. In this fast-paced world of amazing technology, it becomes so easy to get lost in our heads, stuck in our thinking. Thank you for your wisdom Richard.

Integration and Connection To Work Are Central To Social Business Success Over the last few weeks, several important parallel threads in social collaboration have begun flowing together at long last, though still a little uneasily yet. From this discussion I believe there's a real chance to address some long-standing social business challenges if we can work through and address these issues better than we have up until now. Unfortunately, any progress will require connecting some technology thinking with some business thinking, which is the quintessential oil and water of the information technology divide. However, I believe we can now do this better than we ever could in the recent past and that a major opportunity lies ahead. Specifically, these threads are: 1. 2. The first thread on social integration with IT systems is one that I've been exploring in recent months with social app stores, OpenSocial 2.0, social networking applications, and so on. Focusing on the work Related: Open Work: Using Social Software To Make Our Work Visible Again How might this look?