Tim Wu: ‘The internet is like the classic story of the party that went sour’ Tim Wu is a law professor at Columbia University. 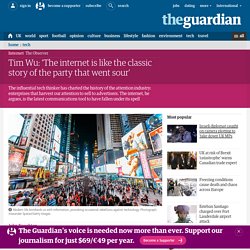 His specialities include competition, copyright and telecommunications law. So far, so conventional. But Wu is an unconventional academic. For one thing, he ran for the Democratic nomination for lieutenant governorship of New York (and won 40% of the popular vote, though not the primary election). For another, he served for a time in the office of New York’s attorney general, specialising in issues involving technology, consumer protection and ensuring fair competition among online companies. As I said, no ordinary academic. In 2010, for example, he published The Master Switch: The Rise and Fall of Information Empires, a sobering history of the great communications technologies of the 20th century – the telephone, movies, broadcast radio and television. Andrew Sullivan: My Distraction Sickness — and Yours. Welcome to Behavioral Politics – Miles Gloriosus – Medium.

Media in the Age of Algorithms – Tim O'Reilly – Medium. Dear Mark Zuckerberg, – Susan Lyne – Medium. In the days since Tuesday’s election, I’ve had hundreds of conversations with people about the results and there has been one common thread in all of them: “Why didn’t we see this coming? 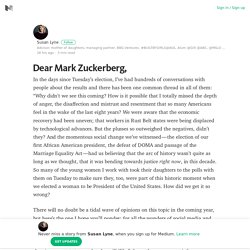 How is it possible that I totally missed the depth of anger, the disaffection and mistrust and resentment that so many Americans feel in the wake of the last eight years? We were aware that the economic recovery had been uneven; that workers in Rust Belt states were being displaced by technological advances. But the plusses so outweighed the negatives, didn’t they? And the momentous social change we’ve witnessed — the election of our first African American president, the defeat of DOMA and passage of the Marriage Equality Act — had us believing that the arc of history wasn’t quite as long as we thought, that it was bending towards justice right now, in this decade. Strategies to Help Students ‘Go Deep’ When Reading Digitally. Students are doing more reading on digital devices than they ever have before. 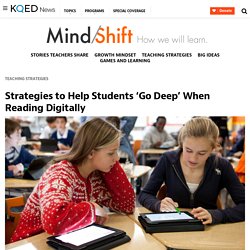 Not only are many teachers using tablets and computers for classroom instruction, but many state tests are now administered on computers, adding incentive for teachers to teach digital reading strategies. But casual digital reading on the internet has instilled bad habits in many students, making it difficult for them to engage deeply with digital text in the same way they do when reading materials printed on paper.

Devin Hess sympathizes with educators’ concerns, but believes digital reading is here to stay and teachers have a duty to equip students to engage with digital texts in meaningful ways. Hess was a middle school social studies teacher and early tech adopter in his classroom. Now he works with the UC Berkeley History-Social Science Project training social studies teachers on deep reading strategies. “I don’t believe technology should ever be taught separately,” Hess said. What technology are we addicted to this time? — Timeline. Me! Me! Me! Are we living through a narcissism epidemic?

Slack, I’m Breaking Up with You — Better People. Is Social Media Making Us Dumb? Why Facebook Really Wants You to Use Its New Reaction Buttons. Claire BernishFebruary 25, 2016 (ANTIMEDIA) As usual, Facebook’s newest so-called ‘enhancement’ — the emoji reaction buttons meant to be alternatives to the much-maligned ‘like’ option — come with a rather important catch: social engineering.

“Facebook confirmed to Mic that it will use data gathered when you use the new emojis to alter your News Feed and learn more about what you like […] Do you prefer Bernie Sanders to Donald Trump, or fashion to green living? […] Facebook knows this about you, and it will use the information to tailor your News Feed to things Facebook thinks you want to see,” reported Mic. Though Facebook often disputes suspicions its updates are psycho-social experiments, the platform’s notorious 2014 study, published in the Proceedings of the National Academy of Sciences, proved users can’t be confident they aren’t. In other words, Facebook, itself, isn’t the only interest at stake. What World Are We Building? — Data & Society: Points. 0. 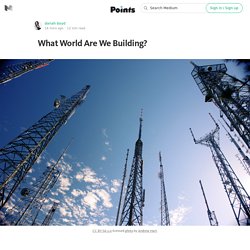 Internet I grew up in small town Pennsylvania, where I struggled to fit in. As a geeky queer kid, I rebelled against hypocritical dynamics in my community. When I first got access to the Internet, before the World Wide Web existed, I was like a kid in a candy store. Through early online communities, I met people who opened my eyes to social issues and helped me appreciate things that I didn’t even understand. I studied computer science, wanting to build systems that connected people and broke down societal barriers. In the late 90s, the hype around the Internet became bubbalicious, and it started to be painfully clear to me that economic agendas could shape technology in powerful ways. In the early days of social network sites, it was exhilarating watching people grasp that they were part of a large global network.

What the Internet is Doing to Our Brains [Epipheo.TV] We Are Hopelessly Hooked by Jacob Weisberg. Reclaiming Conversation: The Power of Talk in a Digital Age by Sherry Turkle Penguin, 436 pp., $27.95 Alone Together: Why We Expect More from Technology and Less from Each Other Basic Books, 360 pp., $17.99 (paper) 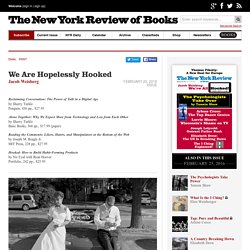 Related:  INF533   -  Referências de animação   -  Meditation   -  Key drivers   -  Further information and resources   -  Theory of Knowledge   -  Learn About Digital Storytelling!   -  Surcharge cognitive   -  Digital Literature   -  TEACHER EDUCATION   -  to print   -  Lecture et technologie   -  natural time   -  Digital Literacy   -  Online gambling   -  Internet connected dangers   -  Digital Literature   -  unclassified   -  Web privacy   -  priority reading   -  Literacy & Non-Fiction Texts   -  NEW 1   -  NetSmarts   -  Andrew Sullivan: My Distraction Sickness — and Yours   -  Strategies to Help Students ‘Go Deep’ When Reading Digitally   -  What the Internet is Doing to Our Brains [Epipheo.TV]   -  Attention   -  Oscar Pistorius trial grabs the world's attention   -  Attention and Intention   -  The International Focusing Institute   -  Monk Mind: How to Increase Your Focus : zenhabits   -  The Psychology of Flow (in under 300 words) — PsyBlog   -  How to Train Your Brain to Stay Focused | Entrepreneur.com   -  Why Focus Makes Us Smarter--and 8 Ways to Sharpen Yours | Big Think   -  How to Stay Focused When You Get Bored Working Toward Your Goals   -  Mihaly Csikszentmihalyi: Flow, the secret to happiness | TED Talk   -  Train Your Brain for Monk-Like Focus   -  How to Focus A Wandering Mind, by Wendy Hasenkamp   -  Stop Wasting Time on Things that Don't Have a Purpose in Your Life   -  Warren Buffett's "2 List" Strategy: How to Maximize Your Focus and Master Your Priorities   -  Time Blocking -- The Secret Weapon For Better Focus   -  Education   -  Enterprise