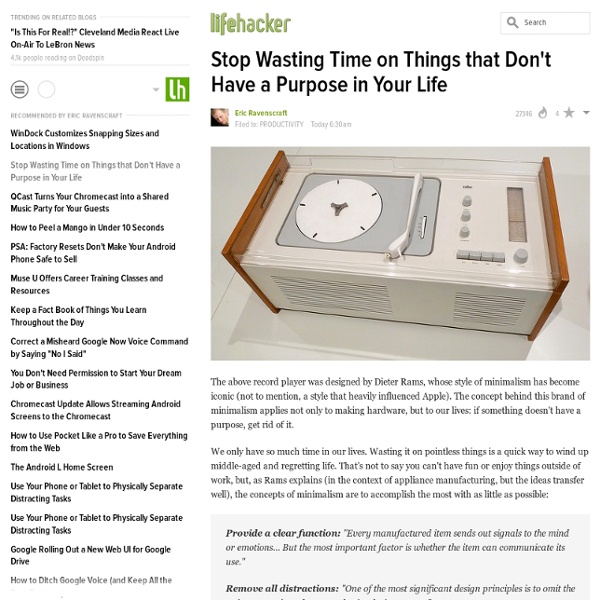 How To Get More Done By Having Less To Do Ask anyone how their life’s going these days, and either he or she will answer: “Busy!” “I think it’s an almost universal experience right now that people feel busy but not productive,” says Greg McKeown, whose new book, Essentialism: The Disciplined Pursuit of Less, argues for paring back commitments to achieve more. If you’re feeling stretched, here’s five ways how to pull yourself back together: 1. You’re looking at a new opportunity. The point is that “we need to see the difference between things that are good and things that are exceptionally good," he says. 2. As you examine your current life commitments, the best metaphor is to clean out your closet. Likewise, if you’re holding onto a commitment only because you’ve been doing it for a while, ask yourself if you’d add it to your life if it weren’t already there. 3. We think working more hours will help us get ahead. 4. Being an essentialist is “not just about saying no to stuff,” says McKeown. 5. [Image: Flickr user toffehoff]

Keep Calm and Stay Focused The power of saying no ‘Every time we say yes to a request, we are also saying no to anything else we might accomplish with the time’ Every year I seem to have the same resolution: say “no” more often. Despite my black belt in economics-fu, it’s an endless challenge. Let’s start with why it’s hard to say “no”. A psychological tactic to get around this problem is to try to feel the pain of “yes” immediately, rather than at some point to be specified later. One trick is to ask, “If I had to do this today, would I agree to it?” Here’s a more extreme version of the same principle. This is, of course, absurd. There is a far broader economic principle at work in the judicious use of the word “no”. Consider the following puzzle, a variant of which was set by Paul J Ferraro and Laura O Taylor to economists at a major academic conference back in 2005. If you’re not sure of your answer, never fear: the correct answer (below), was also the one least favoured by the economists.

Stay Focused Time Assets vs. Time Debts: A Different Way of Thinking About Productivity | James Clear Late in his career, Steve Jobs famously drove his car without a license plate. There were all sorts of theories about why Jobs decided to drive without tags. Some people said he didn’t want to be tracked. According to Callas, Steve Jobs discovered a loophole in the California vehicle registration laws. Once he realized this, Jobs arranged a special leasing agreement with his Mercedes dealer so that every six months he would drop off his current car and receive a new Mercedes SL55 AMG to replace it. After hearing the story, many people responded by saying something like, “I guess that’s what you do when you have a lot of money.” Time Assets vs. Most productivity strategies focus on short-term efficiency: how to manage your to-do list effectively, how to get more done each morning, how to shorten your weekly meetings, and so on. We often fail to realize, however, that there are certain strategic choices that impact our time on a larger scale. Time Assets in Real Life Assets Speaking. Debts

4 Things You Thought Were True About Time Management - Amy Gallo by Amy Gallo | 1:00 PM July 22, 2014 I don’t know anyone who doesn’t struggle with how to make the most of their time at work. How do you stay on top of an overflowing inbox? To make matters worse, there are lots of misconceptions about what time management really comes down to and how to achieve it. It’s about managing your time. Time management is a misnomer, says Jordan Cohen, a productivity expert and author of “Make Time for the Work That Matters.” Teresa Amabile, the Edsel Bryant Ford Professor of Business Administration at Harvard Business School and coauthor of The Progress Principle, whose expertise in this area comes from reading the work diaries of thousands of workers who documented their struggles to get work done, says it’s more about managing your overall workload. You just need to find the right system or approach. “Having a system can be useful, but it takes more than that,” says Amabile. You need to devote time to change. This may be partly true.

Decide What NOT To Do Your work-life balance hangs in these four quadrants I find most “work-life balance” conversations challenging. For starters, there’s a distinctly gendered component to them – where women seem to be expected to worry more about balancing it all, and where “life” is code for domestic duties, rather than, you know, LIFE in all its juicy, nourishing, celebratory glory. But I find we also tend to get caught up in finding a single correct answer that works for everyone. (Kinda like we do for most things in life.) My man, for example, would be deeply dismayed if someone forced him to work only forty hours a week. I, on the other hand, enjoy flipping through French decor magazines or browsing Pinterest for fun, but I also find writing blog posts to be a genuinely enjoyable way to while away a couple of hours. The work-life axis just doesn’t work, in my experience. On the other hand, we certainly know it when the balance is out of whack, don’t we? So how do we pull things back into balance? I’ve got a hypothesis. The Balance Matrix Got that? Related

The Productivity Paradox: How Sony Pictures Gets More Out of People by Demanding Less The Idea in Brief Human beings don’t work like computers; they can’t operate at high speeds continuously, running multiple programs at once. People perform at their peak when they alternate between periods of intense focus and intermittent renewal. Employees can increase their effectiveness by practicing simple rituals that refuel their energy, such as taking a daily walk to get an emotional breather or turning off e-mail at prescribed times so they can concentrate. If companies allow and encourage employees to create and stick to such rituals, they will be rewarded with a more engaged, productive, and focused workforce. Artwork: Antony Gormley, Capacitor, 2001. The way most of us work isn’t working. Nearly a decade ago, the Energy Project, the company I head, began to address work performance and the problem of employee disengagement. To date, the reaction to the program has been overwhelmingly positive.