How to Train Your Brain to Stay Focused 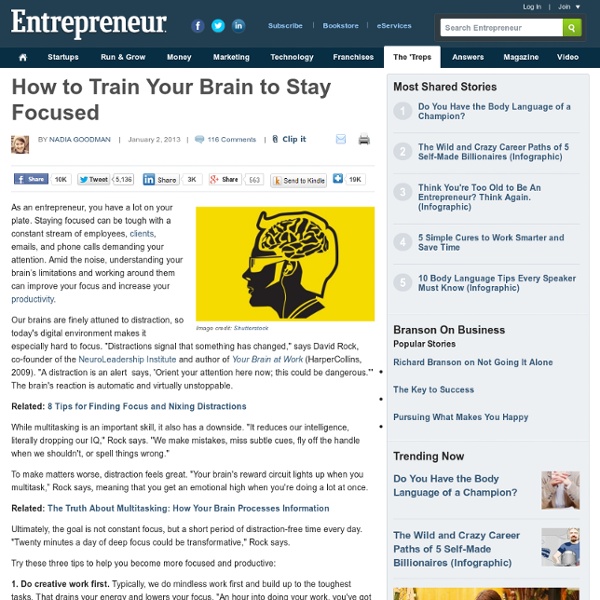 As an entrepreneur, you have a lot on your plate. Staying focused can be tough with a constant stream of employees, clients, emails, and phone calls demanding your attention. Amid the noise, understanding your brain’s limitations and working around them can improve your focus and increase your productivity. Our brains are finely attuned to distraction, so today's digital environment makes it especially hard to focus. "Distractions signal that something has changed," says David Rock, co-founder of the NeuroLeadership Institute and author of Your Brain at Work (HarperCollins, 2009). Related: 8 Tips for Finding Focus and Nixing Distractions While multitasking is an important skill, it also has a downside. To make matters worse, distraction feels great. Related: The Truth About Multitasking: How Your Brain Processes Information Ultimately, the goal is not constant focus, but a short period of distraction-free time every day. Try these three tips to help you become more focused and productive:

Accept Defeat: The Neuroscience of Screwing Up | Magazine Illustration: Cristiana Couceiro, Scientis: Getty Images How To Fail Screw ups, disasters, misfires, flops. Why losing big can be a winning strategy. It all started with the sound of static. But they made the scope too sensitive. At first, they assumed the noise was man-made, an emanation from nearby New York City. For the next year, Penzias and Wilson tried to ignore the noise, concentrating on observations that didn’t require cosmic silence or perfect precision. Kevin Dunbar is a researcher who studies how scientists study things — how they fail and succeed. He ended up spending the next year staring at postdocs and test tubes: The researchers were his flock, and he was the ornithologist. Dunbar came away from his in vivo studies with an unsettling insight: Science is a deeply frustrating pursuit. Dunbar was fascinated by these statistics.

Teaching the brain to reduce pain People can be conditioned to feel less pain when they hear a neutral sound, new research from the University of Luxembourg has found. This lends weight to the idea that we can learn to use mind-over-matter to beat pain. The scientific article was published recently in the online journal PLOS One. Scientists have known for many years that on-going pain in one part of the body is reduced when a new pain is inflicted to another part of the body. This pain blocking is a physiological reaction by the nervous system to help the body deal with a potentially more relevant novel threat. To explore this "pain inhibits pain" phenomenon, painful electric pulses were first administered to a subject's foot (first pain) and the resulting pain intensity was then measured. The brain had been conditioned to the ringtone being a signal to trigger the body's physical pain blocking mechanism. Explore further: Understanding and managing chronic pain

18 ways to educate yourself every day (because nerds are sexy) | Malavika Suresh “Anyone who stops learning is old, whether at 20 or 80. Anyone who keeps learning stays young. The greatest thing in life is to keep your mind young.” Henry Ford At the start of this year I made a decision that I want to commit to myself to a pursuit of intellect. I’m already a bit of a nerd, so this wasn’t really an alien concept for me, however I quickly realized that in order for me to make educating myself a priority in my life – I would have to make it into a daily habit. Wow, I did not just say that. 1. “Riveting talks by remarkable people, free to the world.” 2. They are quick, easy, informative, and give you a glimpse of a subject that you may decide to do more research on later! A lovely reader recommended the podcasts “Stuff you should know” and “Stuff mom never told you” which can be found on the website. 3. This is such a monumental suggestion. 4. Focus more at work. 5. 6. This could be jigsaw puzzles, riddles, math puzzles etc. 7. 8. 9. 10. 11. 12. 13. 14. 15. 16. 17. 18. 19.

How I Was Able to Ace Exams Without Studying Editor’s note: This is a guest post from Scott Young of ScottYoung.com. In high school, I rarely studied. Despite that, I graduated second in my class. In university, I generally studied less than an hour or two before major exams. However, over four years, my GPA always sat between an A and an A+. Recently I had to write a law exam worth 100% of my final grade. Right now, I’m guessing most of you think I’m just an arrogant jerk. Why do Some People Learn Quickly? The fact is most of my feats are relatively mundane. The story isn’t about how great I am (I’m certainly not) or even about the fantastic accomplishments of other learners. It’s this different strategy, not just blind luck and arrogance, that separates rapid learners from those who struggle. Most sources say that the difference in IQ scores across a group is roughly half genes and half environment. Rote memorization is based on the theory that if you look at information enough times it will magically be stored inside your head. 1.

Brain wave study shows how different teaching methods affect reading development Beginning readers who focus on letter-sound relationships, or phonics, instead of trying to learn whole words, increase activity in the area of their brains best wired for reading, according to new Stanford research investigating how the brain responds to different types of reading instruction. In other words, to develop reading skills, teaching students to sound out "C-A-T" sparks more optimal brain circuitry than instructing them to memorize the word "cat." And, the study found, these teaching-induced differences show up even on future encounters with the word. The study, co-authored by Stanford Professor Bruce McCandliss of the Graduate School of Education and the Stanford Neuroscience Institute, provides some of the first evidence that a specific teaching strategy for reading has direct neural impact. Instructional strategies Remarkably, the researchers said, these very rapid brain responses to the newly learned words were influenced by how they were learned. Monitoring brain waves

» 100 Ways to Increase Brain Power and Think Like a Genius! Want to think like Einstein? Use these brain boosters to increase brain power for faster learning, better memory, sharper thinking, out-of-the-box problem solving, more efficiency and productivity and enhanced creativity…and get you thinking like the great thinkers. Don’t make working your brain a chore! These are fun, they keep life interesting and best of all, don’t take any extra time (you might have to give up some TV, but you’ll love the results). Meditate: the #1 brain exercise! Work on being ambidextrous. Keep a journal.Write down ideas as soon as you have them and return to them often.Simplify, declutter and organize your living and work space.Take a class in something you’ve never explored.Take several 10-minute brisk walk-breaks throughout the day.Learn to spell backwards.Change the furniture placement and art/accessories in your home.Learn to play a musical instrument (and read music). Practice walking meditation. Haven’t heard of Omharmonics meditation audio yet?