Amazon soya and beef exports 'linked to deforestation' Climate change: Planting new forests 'can do more harm than good' Image copyright Getty Images Rather than benefiting the environment, large-scale tree planting may do the opposite, two new studies have found. 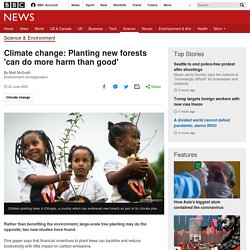 One paper says that financial incentives to plant trees can backfire and reduce biodiversity with little impact on carbon emissions. A separate project found that the amount of carbon that new forests can absorb may be overestimated. The key message from both papers is that planting trees is not a simple climate solution. Over the past few years, the idea of planting trees as a low cost, high impact solution to climate change has really taken hold. Image copyright Cristian Echeverría Previous studies have indicated that trees have enormous potential to soak up and store carbon, and many countries have established tree planting campaigns as a key element of their plans to tackle climate change. Eight years after Fukushima, what has made evacuees come home? On 11 March 2011, one of the biggest earthquakes ever recorded struck Japan’s north-east coast, triggering a tsunami that killed almost 19,000 people. 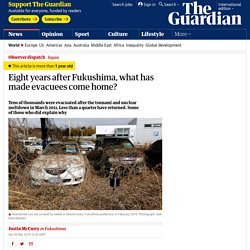 In Fukushima, the waves’ destructive power unleashed another menace – a triple meltdown at the Fukushima Daiichi nuclear power plant. Radiation forced tens of thousands to evacuate, turning towns and villages into no-go zones. Today, neighbourhoods closest to the plant are trapped in time. Homes have fallen into disrepair and weeds and other plants have been left to swallow up pavements, roads and once well-tended gardens, while boar and other wild animals roam the streets. But a little further out, there are signs of recovery: new shops, restaurants and public buildings catering to the small number of people who have decided to return. But these are modest gains. Workers at Fukushima Daiichi are battling with huge quantities of radioactive water, while decommissioning the plant is expected to take at least four decades.

Kathy Sullivan: The woman who's made history in sea and space. Image copyright NASA Making headlines is never something that has motivated Kathy Sullivan. 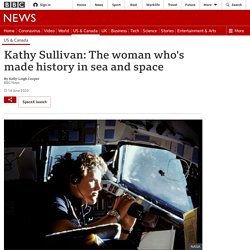 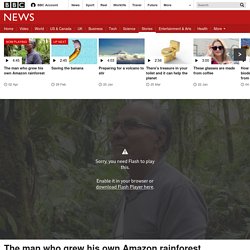 Oceans can be successfully restored by 2050, say scientists. Image copyright R.Hucke-Gaete Despite being treated as humanity's rubbish dump for decades, the oceans of the world are proving remarkably resilient, says a new scientific review. 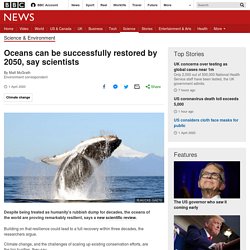 Building on that resilience could lead to a full recovery within three decades, the researchers argue. Climate change, and the challenges of scaling up existing conservation efforts, are the big hurdles, they say. The researchers caution that the window for action is now very narrow. The oceans have been exploited by humans for centuries, but the negative impacts of our involvement have only become clear over the last 50 years or so. Science & Environment. 'Dinosaurs walked through Antarctic rainforests' Image copyright AWI/James McKay Scientists drilling off the coast of West Antarctica have found the fossil remains of forests that grew in the region 90 million years ago - in the time of the dinosaurs. 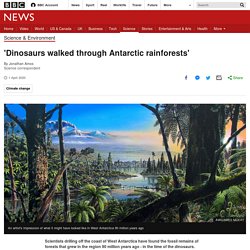 Their analysis of the material indicates the continent back then would have been as warm as parts of Europe are today but that global sea levels would have been over 100m higher than at present. The research, led from the Alfred Wegener Institute (AWI) in Germany, is published in the journal Nature. Rising sea levels and small islands. Oceans currents and climate change. The UK’s first climate change refugees? News BBC News Navigation Sections. 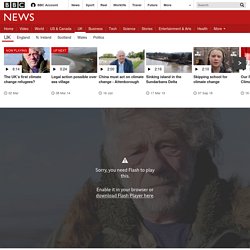 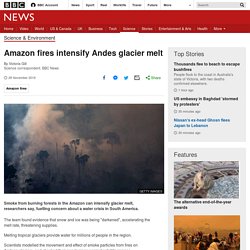 The team found evidence that snow and ice was being "darkened", accelerating the melt rate, threatening supplies. Melting tropical glaciers provide water for millions of people in the region. Scientists modelled the movement and effect of smoke particles from fires on Andean glaciers, and checked their conclusions against satellite images. Climate change: 1.9 billion people rely on natural 'water towers' Image copyright Matthew Paley/National Geographic In a unique study, scientists have assessed and ranked the importance of Earth's great "water towers". 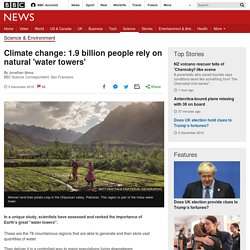 These are the 78 mountainous regions that are able to generate and then store vast quantities of water. They deliver it in a controlled way to major populations living downstream. People urgently fleeing climate crisis cannot be sent home, UN rules. Image copyright Getty Images People fleeing immediate danger due to the climate crisis cannot be forced to return home, the UN has said. 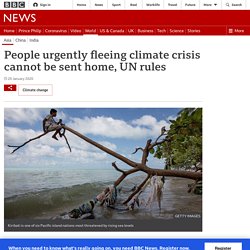 The landmark ruling centres on the case of Ioane Teitiota, whose home - the Pacific Island of Kiribati - is threatened by rising sea levels. How Do Scientists Know the Structure of the Earth's Interior? It is widely accepted that the Earth’s interior is composed of several layers: the crust, the mantle and the core. Since the crust is readily accessible, scientists have been able to perform hands-on experiments to determine its composition; studies on the more distant mantle and core have more limited opportunities samples, so scientists also rely on analyses of seismic waves and gravity, as well as magnetic studies. TL;DR (Too Long; Didn't Read) Taal volcano: Lava spews as 'hazardous eruption' feared. Media playback is unsupported on your device A volcano in the Philippines has begun spewing lava, as authorities warn that a "hazardous eruption" is possible "within hours or days". In the early hours of Monday, a weak flow of lava began seeping out of Taal volcano - located some 70km (45 miles) south of the capital Manila.

The deepest hole we have ever dug - BBC Future. * This story is featured in BBC Future’s “Best of 2019” collection. Discover more of our picks. The lakes, forests, mists and snow of the Kola Peninsula, deep in the Arctic Circle, can make this corner of Russia seem like a scene from a fairy tale. White Island volcano: Rescuer tells of 'Chernobyl'-like scene. Media playback is unsupported on your device A paramedic who flew to New Zealand's White Island to rescue tourists after Monday's volcanic eruption has said the scene was like something out of "the Chernobyl mini-series". "Everything was blanketed in ash," Russell Clark told TVNZ. Dozens of tourists were on the island at the time. Six have been confirmed dead. Preparing for an active volcano to stir. Greenland and Antarctica ice loss accelerating.