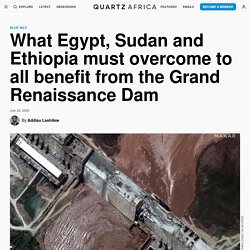 The meeting, which was attended by the leaders of the three countries, produced “a major common understanding” among the negotiating parties, and concluded by extending the AU-led technical negotiations. A week before, the three countries had ended the first round of the A.U. -led negotiations without an agreement. Tensions further arose when satellite images revealed a growing reservoir behind the GERD, angering Egypt and Sudan that had demanded that Ethiopia should not start filling the dam without an agreement. Ethiopian officials have explained that the dam’s gates are not closed, and that the water pool is caused by an inflow of flood after heavy monsoon rains. Maxar Technologies via REUTERS. Development issues on the negative side of BIG dam building Kenya fishermen say they are squeezed by Ethiopian mega-dam. Twitter. Water security: Saving the Nile. Analysing the impact large dams have on the world's most famous river #dataviz #ddj @AJLabs @AJEnglish.

"We do not want escalation. Negotiations are the only solution, signing an agreement is a prerequisite for us before filling the dam. Sudan has the right to demand it." - Yasser Abbas, Irrigation and Water Resources Minister. *****The spectacular failures and successes of massive dams. Image copyright Getty Images Not far from Cairo stood a remarkable dam, the Sadd el-Kafara, more than 100m long, and 14m high, and able to store about half a million cubic metres of water. 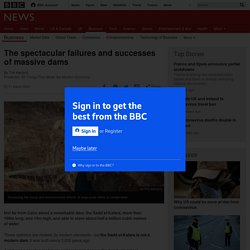 These statistics are modest, by modern standards - but the Sadd el-Kafara is not a modern dam. It was built nearly 5,000 years ago. And it was a spectacular failure: archaeologists believe the dam burst almost immediately. Image copyright Jean-Luc Frerotte One cannot fault the ancient Egyptians for trying. Water was scarce, and rainfall uneven. Ancient Egypt isn't the only place to have found itself trying to deal with uneven rainfall.

Much of the world's population lives in places where the availability of water is seasonal, or - increasingly - unpredictable. Where such a system is lacking, the effects can be brutal: Kenya lost more than 10 per cent of its economic output to drought in the late 1990s, followed by an even larger economic loss because of flooding. Could mega-dams kill the mighty River Nile? (an interactive report) Saving the Nile. Analysing the impact large dams have on the world's most famous river #geographyteacher #dataviz #ddj @AJLabs @AJEnglish. Egypt, Ethiopia, Sudan say final agreement on Blue Nile dam ready by next month. YouTube. YouTube. YouTube. Nile River dam row: Egypt, Ethiopia and Sudan make draft deal. *****Egypt-Ethiopia row over River Nile dam. Image copyright Reuters The latest talks to resolve the dispute between Ethiopia and Egypt over the future of a giant hydropower project on the Nile River are due to resume in Washington later. 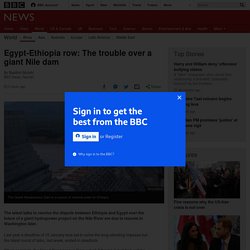 Last year a deadline of 15 January was set to solve the long-standing impasse but the latest round of talks, last week, ended in deadlock. When complete, the Grand Renaissance Dam, which Ethiopia is building, will be Africa's biggest hydroelectric power plant. Its construction began in 2011 on the Blue Nile tributary in the northern Ethiopia highlands, from where 85% of the Nile's waters flow. However, the mega dam has caused a row between Egypt and Ethiopia, with Sudan caught in between, which some fear could lead to war, and the US is now helping to mediate. Why is it so contentious? *****The #Nile is of utmost importance to #Egypt. No wonder #Egypt is eyeing #Ethiopia's Grand Renaissance Dam with great suspicion. This #infrastructure project as massive conflict potential. Source: 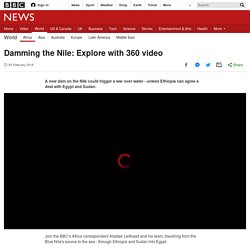 <div style="position: relative"><img src=" alt="a 360-degree version of the Damming the Nile VR series from BBC News" style="display: block; width: 100%; opacity: 1;"><div style="background-color: rgba(0,0,0,0.5); bottom: 0; color: #fff; display: block; font-weight: bold; left: 0; padding: 8px; position: absolute; right: 0; z-index: 10 ! Important;"> Media playback is unsupported on your device </div></div> Join the BBC's Africa correspondent Alastair Leithead and his team, travelling from the Blue Nile's source to the sea - through Ethiopia and Sudan into Egypt. Flying high above the river and its waterfalls, you will inspect the dam up close and take a sunrise balloon ride over Luxor as the story unfolds.

This 360° video is a version of the first VR documentary series from BBC News. To view the full films, go to bbc.co.uk/virtualreality for more information. Simon Kuestenmacher sur Twitter : "The #Nile is of utmost importance to #Egypt. No wonder #Egypt is eyeing #Ethiopia's Grand Renaissance Dam with great suspicion. This #infrastructure project as massive conflict potential. Source.