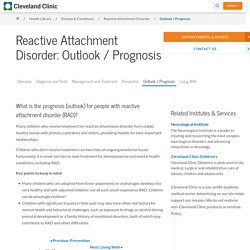 Many children who receive treatment for reactive attachment disorder form stable, healthy bonds with primary caretakers and others, providing models for later important relationships. Children who don’t receive treatment can face risks of ongoing emotional issues. Fortunately, it is never too late to seek treatment for developmental and mental health conditions, including RAD.

Key points to keep in mind Many children who are adopted from foster placements or orphanages develop into very healthy and well-adjusted children; not all such youth experience RAD. Cleveland Clinic is a non-profit academic medical center. Reactive attachment disorder. Diagnosis A pediatric psychiatrist or psychologist can conduct a thorough, in-depth examination to diagnose reactive attachment disorder. Your child's evaluation may include: Direct observation of interaction with parents or caregiversDetails about the pattern of behavior over timeExamples of the behavior in a variety of situationsInformation about interactions with parents or caregivers and othersQuestions about the home and living situation since birthAn evaluation of parenting and caregiving styles and abilities Your child's doctor will also want to rule out other psychiatric disorders and determine if any other mental health conditions co-exist, such as: Intellectual disabilityOther adjustment disordersAutism spectrum disorderDepressive disorders Diagnostic and Statistical Manual of Mental Disorders (DMS-5) Your doctor may use the diagnostic criteria for reactive attachment disorder in the DSM-5, published by the American Psychiatric Association.

God’s Great Reversal: Key to the Gospel of Luke - Franciscan Media. How adopted Romanian orphans are coping today. It is more than a decade since the first images of forlorn, dislocated and eerily silent Romanian children who had been abandoned in institutions appeared here. 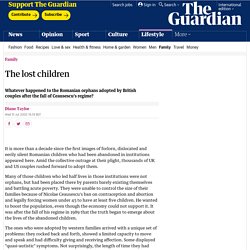 Amid the collective outrage at their plight, thousands of UK and US couples rushed forward to adopt them. Many of those children who led half lives in those institutions were not orphans, but had been placed there by parents barely existing themselves and battling acute poverty. They were unable to control the size of their families because of Nicolae Ceausescu's ban on contraception and abortion and legally forcing women under 45 to have at least five children. He wanted to boost the population, even though the economy could not support it. Popular Mental Health Fiction Books. Surviving Infancy in the Middle Ages. Independent-appeal-how-ceausescus-orphans-were-given-a-new-start-in-life-2157445. Ceausescu’s children. When Vişinel Balan was two months old he was put in a state infant centre in Bacău, a town folded into the foothills of the Carpathian mountains in Romania. 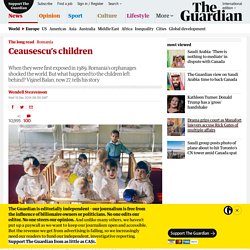 It was August 1987. At the entrance to the institution there was a poster of a mother bringing in her baby, then walking away with her child, now older, hand in hand. 2013 newsletter. The battle of Ceauşescu’s children – Iron Curtain Project. Visinel Balan was one of the estimated 100,000 children who grew up in an ‘orphanage’ around 1989. 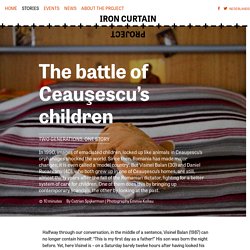 Nicolae Ceauşescu had just taken office as leader of the Romanian Communist Party when he announced a decree designed to ensure population growth. Abortion became illegal for women under 45, parents without children received fines, the marriageable age was lowered from 18 to 15, and the sale and production of contraceptives were banned. This way, Ceauşescu hoped to build a great communist nation and a large army. Bringing a child to the world was like a gift to the country. Untitled. The San Diego Union-Tribune - We are currently unavailable in your region. NPR Choice page. The Disconnected; Attachment Theory: The Ultimate Experiment. Foc142g. A letter from filmmaker John Upton. How do you choose who goes and who stays? 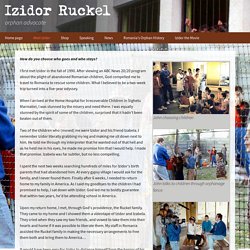 I first met Izidor in the fall of 1990. After viewing an ABC News 20/20 program about the plight of abandoned Romanian children, God compelled me to travel to Romania to rescue some children. What I believed to be a two-week trip turned into a five-year odyssey. The Romanian boy who overcame the dark side of an international adoption. Nicolae Burcea got smallpox immediately after arriving in the US in 2002. 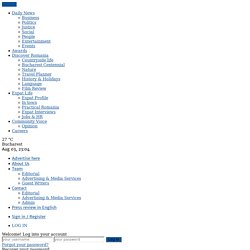 He was sick in bed, looking out the window in a nice neighborhood. The 8-year old boy felt uncertain where the future was gonna lay, but it was the best feeling of being uncertain- to go to bed and not to worry about when you’re gonna be beaten up, when your food is gonna be stolen. It was a big relief. Kidnapped or Saved? How Some Orphans Really Feel When They're Adopted. When an American mother sent her 7 year old adopted son back to Russia, claiming he was mentally unstable, the incident prompted countless media stories about the good, the bad, and the ugly when it comes to adopting children, especially older children, from orphanages in the former Soviet Union. 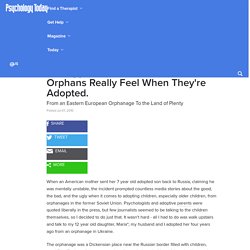 Psychologists and adoptive parents were quoted liberally in the press, but few journalists seemed to be talking to the children themselves, so I decided to do just that. It wasn't hard - all I had to do was walk upstairs and talk to my 12 year old daughter, Maria*; my husband and I adopted her four years ago from an orphanage in Ukraine. The orphanage was a Dickensian place near the Russian border filled with children, aged 7 to 17, whose futures seemed as dim as their pasts. Most of them had been taken away from their biological families due to neglect and/or abuse .The stories they tell are chilling. Source: Things didn't immediately get better when we got to America. - The Washington Post. Romania, 25 years on - Images. 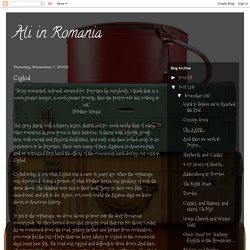 " [Mother Teresa] This story starts with a history lesson, that is not too much unlike that of many other countries at some point in their histories. PressOne English. There are many reasons. 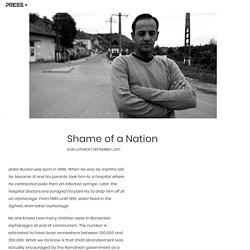 First off, it was my home for 11 years and believe it or not, there are memories I cherish. The few times I was allowed out of the institution, I was in awe of the natural beauty of Sighet. Romania to me was the beautiful land outside the institution, not the evil inside the institution. Ceausescu’s orphans, 20 years on – The Accidental Photographer. I have just been shortlisted for the Photovoice Awards with my work “Ceausescu’s orphans, 20 years on”, a work I started more than two decades ago. 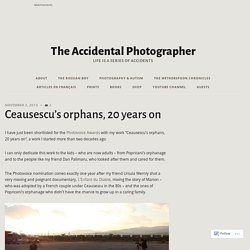 I can only dedicate this work to the kids – who are now adults – from Popricani’s orphanage and to the people like my friend Dan Palimaru, who looked after them and cared for them. The Photovoice nomination comes exactly one year after my friend Ursula Wernly shot a very moving and poignant documentary, L’Enfant du Diable, mixing the story of Marion – who was adopted by a French couple under Ceausescu in the 80s – and the ones of Popricani’s orphanage who didn’t have the chance to grow up in a caring family. Nevertheless, the Casa de Copii in Popricani was their home, the other kids and the carers, their family. Beyond Repair? I love to celebrate the successes of our population of intercountry adopted children in New Zealand. We have over 700 kids adopted by New Zealanders now, largely from Russian and Romanian orphanages.

The numbers of boys and girls are very similar, with large numbers already teenagers or about to become so. I am thrilled when I hear of the incredible things these kids are doing. Just in my own small circle of friends around the country I can think of so many wonderful success stories. Like the boy, who, adopted at age four from a Romanian orphanage, would bang his head against the pavement in a rage of frustration while out with his family.

Or the incredible success of not one but two girls; one from Russia and one from Romania, who represent their regions in top grade young women’s soccer. How about the Romanian boy adopted at age two who stars in musical theatrical performances and absolutely steals the show with his wonderful voice, his sweet nature and his enormous ability to perform. Ceausescu’s children. Ana – Maria Ciobanu of Decat of Revista wrote about life in a Romanian orphanage from the communism era, during dictator Nicolae Ceausescu’s rule, and how the system changed after the fall of communism. This text was published in Romanian in the Decat o Revista magazine. A long building with a single floor shines in the October sun across a disaffected train line. Hope in hell. A decade after the plight of Romania's orphans first touched our hearts, depressingly little has changed: there are still 90,000 children in squalid institutions.

But an Irish pop star and a Birmingham teacher are determined to break the deadlock by raising pound;1 million to build modern homes. Nigel Williamson flew out to meet them and the forgotten children of Siret. Photographs by Paddy Prendergast. The medical chart on the wall says the child clinging desperately to my legs is 12, but he is no bigger than a four-year-old.

He's wearing odd shoes, his clothes are encrusted with dirt and he's as under-nourished emotionally as he is physically. There's nothing much wrong with Bogdan that proper care, a little affection and some mental stimulation couldn't put right. Anneka Rice returns to Romanian orphanage 22 years after first visiting 'living hell' Former orphanage children Viorel and Mariana [ALAN OLLEY/SCOPEFEATURES.COM] The TV presenter, 54, famed for taking on challenges to improve the lives of others, was ­approached to help 700 children ­living at the grim institution. Anneka found severely disabled children tied to their cots in straitjackets while raw sewage ran down the bleak corridors, filling the building with an acrid stench. She was asked for her help after two ­teachers from Birmingham, Monica McDaid and Geraldine Browne, discovered the orphanage on a humanitarian trip. Hope has Come for Adult Romanian Orphans - BORGEN.