Clean air in Europe during lockdown ‘leads to 11,000 fewer deaths’ Report: World Urbanisation Prospects 2014 Highlights. Urban health: major opportunities for improving global health outcomes, despite persistent health inequities. Article: Community perceptions of health and chronic disease in South Indian rural transitional communities: a qualitative study. Differences in cardiovascular risk factors in rural, urban and rural-to-urban migrants in Peru. The case for ... making low-tech 'dumb' cities instead of 'smart' ones. Ever since smartphones hooked us with their limitless possibilities and dopamine hits, mayors and city bureaucrats can’t get enough of the notion of smart-washing their cities. 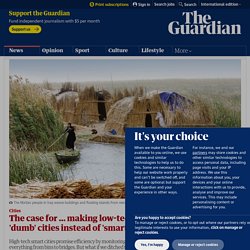 It makes them sound dynamic and attractive to business. What’s not to love about whizzkids streamlining your responsibilities for running services, optimising efficiency and keeping citizens safe into a bunch of fun apps? There’s no concrete definition of a smart city, but high-tech versions promise to use cameras and sensors to monitor everyone and everything, from bins to bridges, and use the resulting data to help the city run smoothly. One high-profile proposal by Google’s sister company, Sidewalk Labs, to give 12 acres of Toronto a smart makeover is facing a massive backlash. In September, an independent report called the plans “frustratingly abstract”; in turn US tech investor Roger McNamee warned Google can’t be trusted with such data, calling the project “surveillance capitalism”.

'There’s food… it’s just not real food’: inside America's hunger capital - video. Guardian Cities 2019: a look back at the 10 most-read stories of the year. It has been our best year yet at Guardian Cities. 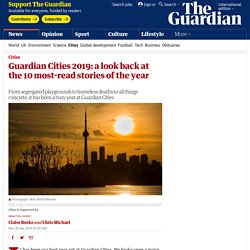 We broke open a major ongoing scandal about London’s segregated playgrounds, told the story of why concrete is the most dangerous material on Earth, and profiled some of the roughly 800 people who died homeless in the UK. India suffers most pollution-linked deaths in world, study finds. India leads the world in pollution-linked deaths– followed by China and Nigeria – according to a report published on Wednesday that estimated the global impact of contaminants in the air, water and workplace. 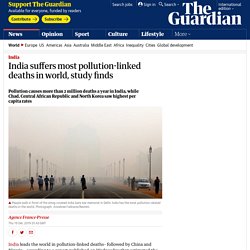 The report by the Global Alliance on Health and Pollution (GAHP) found pollution to be the largest environmental cause of premature death on the planet, causing 15% of all deaths – some 8.3 million people. Among the 10 countries with the most pollution deaths in 2017, the latest year for which data was available, were some of the world’s largest and wealthiest nations, as well as some poorer ones. India and China led in the number of pollution deaths, with about 2.3 million and 1.8 million respectively, followed by Nigeria, Indonesia and Pakistan. 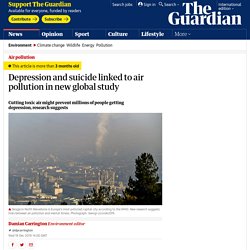 Cutting air pollution around the world to the EU’s legal limit could prevent millions of people becoming depressed, the research suggests. This assumes that exposure to toxic air is causing these cases of depression. Scientists believe this is likely but is difficult to prove beyond doubt. Air pollution may have killed 30,000 people in a single year, study says.

Those deaths came even as almost every county in the United States remained within federal air quality standards. 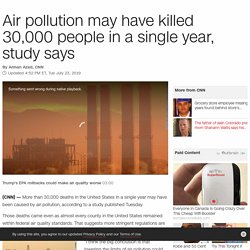 That suggests more stringent regulations are needed to protect human health, researchers say. Manchester. Revealed: air pollution may be damaging 'every organ in the body' ‘Doctors need to speak up’ Schraufnagel is concerned that many doctors are unaware of this wide-ranging damage associated with air pollution. 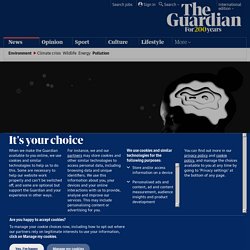 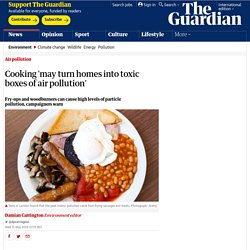 Case studies commissioned by the environment charity Global Action Plan (GAP) showed that ultrafine particle pollution was higher inside than outside in all four of the properties monitored. Tiny particles are thought to be especially harmful to health as they can enter the bloodstream and flow around the body into vital organs. The 24-hour tests took place in houses in London, Pontypridd, Liverpool and Lancaster. 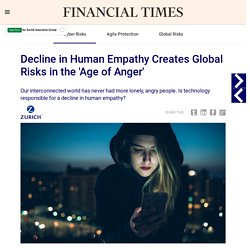 Technology is revolutionizing the workplace, and creating unprecedented opportunities for business and society as the physical, digital and biological worlds increasingly merge. Matt Hancock launches study into 'deadly poison' of air pollution. The health secretary has described polluted air as a “slow and deadly poison” and warned of a growing national health emergency. 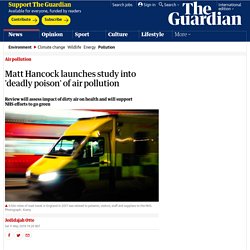 Matt Hancock has commissioned a review of the impact of dirty air on health, including updated estimates of the number of new cases of illness that could be caused by air pollution by 2035. Public Health England (PHE) predicted in May 2018 that there would be 2.4m new cases of disease by 2035 if current air pollution levels persisted. According to PHE, diseases with a strong association with air pollution include child asthma, coronary heart disease, stroke and lung cancer. 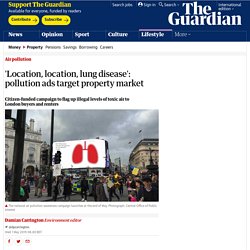 These will be accompanied by online ads and a website where homebuyers and renters in London will be able to look up levels of toxic air for the property they are considering. The campaign will launch in the capital in late May and there are plans to make it nationwide. Sinking city: how Venice is managing Europe's worst tourism crisis. Friday 15 March was a rare day in Venice: on the concourse in front of the Santa Lucia train station, Venetians outnumbered tourists. Young Venetians had skipped school to join the global youth climate strike, holding placards with statements such as “If climate was a bank, you’d save it.” The movement is especially relevant in Venice, since a 50cm rise in sea levels could see the city vanish beneath the waves. Critical as the climate crisis is, the city faces a more immediate risk: the rising tide of tourists, presently estimated at 25 million a year and projected to reach 38 million by 2025.

Europe, already the world’s largest tourism market, received 713 million international visitors in 2018, an 8% increase on the previous year, according to the UN World Tourism Organization. But, in European cities, the increase is far greater: since 2008, overnight stays have jumped 57%. With just 50 rooms and 40 members of staff, they calculate they save 36,000 plastic bottles a year. Nationalgeographic.co. Toxic air will shorten children's lives by 20 months, study reveals.

The life expectancy of children born today will be shortened by 20 months on average by breathing the toxic air that is widespread across the globe, with the greatest toll in south Asia, according to a major study. Air pollution contributed to nearly one in every 10 deaths in 2017, making it a bigger killer than malaria and road accidents and comparable to smoking, according to the State of Global Air (SOGA) 2019 study published on Wednesday.

In south Asia, children can expect to have their lives cut short by 30 months, and in sub-Saharan Africa by 24 months, because of a combination of outdoor air pollution caused by traffic and industry, and dirty air indoors, largely from cooking fires. In east Asia, air pollution will shorten children’s lives by an estimated 23 months. However, the life expectancy burden is forecast to be less than five months for children in the developed world. O’Keefe said measures to take included investing in electric vehicles, and renewable energy. Quiz: can you identify these world cities from their density maps alone? LSE Cities says: “Residential density measures how closely people live together. More compact cities have higher densities, while cities that sprawl and have wide open spaces between buildings have lower densities.

Can 'agritecture' make cities self-sufficient? – in pictures. These Cool Aerial Shots Show The Severe Smog Conditions in Poland – The Aviationist. Smog is a major problem in Poland. During the wintertime it often makes the headlines of the mainstream media. The word “smog” comes from a fusion of two vocabulary items: “smoke” and “fog”. Smog usually appears in the areas where non-sufficient air movement comes together with air pollution, caused, for instance, by intensive coal-based heating used by the citizens.

The photos in this post, taken by Ireneusz Kopeć, a pilot for Enter Air, show how the aforesaid phenomenon looks from above. Mayor of London sur Twitter : "London’s dirty air is linked to 9,400 premature deaths each year, and the poorest Londoners are the worst affected. We launched the world’s most advanced network of air quality monitors to investigate and improve London’s to. Murder most foul: polluted Indian river given 'living entity' status but reported dead. One morning in late March, Brij Khandelwal called the Agra police to report an attempted murder. Urban health: major opportunities for improving global health outcomes, despite persistent health inequities.

Beijing smog: pollution red alert declared in China capital and 21 other cities. Beijing authorities have declared a five-day pollution “red alert”, shutting schools, ordering thousands of vehicles off the roads and telling residents to stay indoors, after the Chinese capital was enveloped by a shroud of toxic smog that is expected to linger until Wednesday. The warning – the first since Beijing’s inaugural red alert in December last year – was officially implemented at 4.20pm on Friday as a nicotine-tinged haze rolled into the city. “Smog invades Beijing,” tweeted Xinhua, China’s official news agency, alongside a timelapse video capturing the arrival of what city officials have controversially decided to classify as a “meteorological disaster”.

Theconversation. The recent spate of heatwaves through eastern Australia has reminded us we’re in an Australian summer. On top of another record hot year globally, and as heatwaves become more frequent and intense, our cities are making us even hotter. This is the urban heat island, where city temperatures can be significantly warmer than the surrounding rural regions.

The question, then, is what we can do to keep our cities cooler. The African youth boom: what's worrying Bill Gates. What worries Bill Gates most? The booming population of Africa looms over his foundation’s latest global survey. Grimsby named unhealthiest high street in UK by RSPH study. From London to Shanghai, world's sinking cities face devastating floods. London, Jakarta, Shanghai and Houston and other global cities that are already sinking will become increasingly vulnerable to storms and flooding as a result of global warming, campaigners have warned ahead of a landmark new report on climate science. Cities and Climate Change – Sustainable Urban Futures. Urbanization is one of the key defining features of humanity as a whole. The progressive shift of people from rural areas and activities into towns and cities is a complex process inextricably tied to economic development and technological change.

How an emerging African megacity cut commutes by two hours a day. Theconversation. Dying to breathe: Mongolia's polluted air. Policy Briefing The Air Pollution and Health Benefits of the UK Climate Change Act. Theconversation. Population growth has profound impacts on Australian life, and sorting myths from facts can be difficult. This article is part of our series, Is Australia Full? , which aims to help inform a wide-ranging and often emotive debate.

The dysfunctional megacity: why Dhaka is bursting at the sewers. Article: Airborne pollution and cardiovascular disease: burden and causes of an epidemic. Air pollution more deadly in Africa than malnutrition or dirty water, study warns. The war against air pollution has begun – and it will be fought in cities. #AirPollution is an invisible killer and a major cause of #ClimateChange. It can be deadly. #BreatheLife. The Lancet Commission on pollution and health. Delhi's air pollution is now so bad it is literally off the chart. Landmark report reveals extent of air pollution damage to the heart and circulatory system. The death of diesel: has the one-time wonder fuel become the new asbestos? Use buggy covers to combat air pollution danger, parents warned. Bike Lanes May Be The Most Cost-Effective Way To Improve Public Health. London mayor, Sadiq Khan: how cities can act on air pollution.