ANTIBIOTICS 15/07/21 The Epistatic Landscape of Antibiotic Resistance of Different Clades of Mycobacterium tuberculosis. All articles published by MDPI are made immediately available worldwide under an open access license. 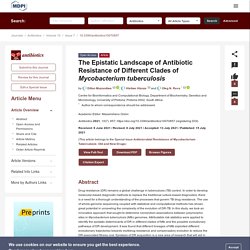 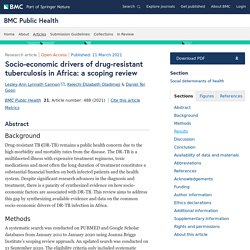 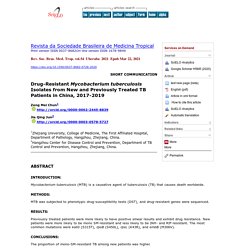 Although the directly observed treatment, short-course (DOTS) strategy has significantly reduced the incidence of TB in recent years, the emergence of drug-resistant TB has severely hampered TB prevention and control, especially regarding multidrug-resistant TB (MDR-TB) and extensively drug-resistant TB (XDR-TB)1. TB epidemics are unevenly distributed in China, and there is a high prevalence in rural areas, especially those that are underdeveloped in the northwest and southwest of China1. Communicable Diseases Intelligence - OCT 2020 - Retrospective analysis of multidrug-resistant tuberculosis case notifications in Australia (1999–2018) EUREKALERT 18/11/20 Solving a mystery: How the TB bacterium develops rapid resistance to antibiotics. For a slow-growing microbe that multiplies infrequently, Mycobacterium tuberculosis, the pathogen that causes tuberculosis (TB) has long puzzled researchers as to how it develops resistance to antibiotics so quickly, in a matter of weeks to months. 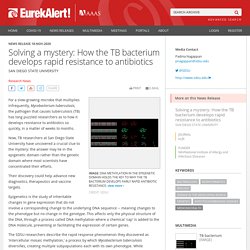 Now, TB researchers at San Diego State University have uncovered a crucial clue to the mystery: the answer may lie in the epigenetic domain rather than the genetic domain where most scientists have concentrated their efforts. Their discovery could help advance new diagnostics, therapeutics and vaccine targets. Epigenetics is the study of inheritable changes in gene expression that do not involve a corresponding change to the underlying DNA sequence -- meaning changes to the phenotype but no change in the genotype. This affects only the physical structure of the DNA, through a process called DNA methylation where a chemical 'cap' is added to the DNA molecule, preventing or facilitating the expression of certain genes. Sci Rep. 2019 Mar 14;9(1):4425. A new oligonucleotide array for the detection of multidrug and extensively drug-resistance tuberculosis.

Because of the urgent need to rapidly and accurately diagnose drug-resistant TB, the WHO has recommended the GenoType MTBDRplus and GenoType MTBDRsl tests for detecting resistance to first- and second-line drugs1. 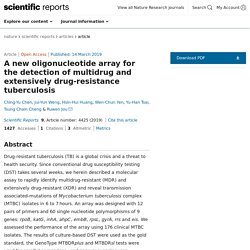 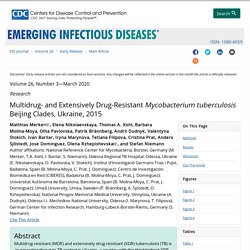 Any changes will be reflected in the online version in the month the article is officially released. Matthias Merker. THE LANCET 01/08/19 Global burden of latent multidrug-resistant tuberculosis: trends and estimates based on mathematical modelling. Introduction Tuberculosis is the infectious disease responsible for the most deaths worldwide. 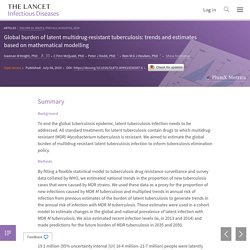 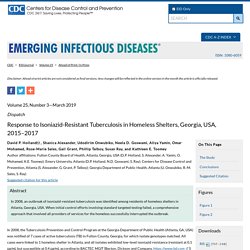 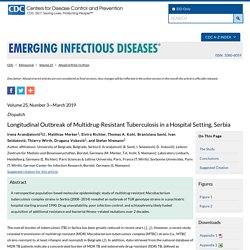 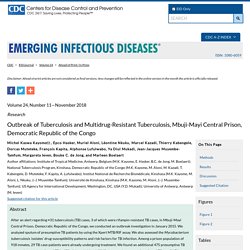 Kayomo, E. Hasker, B.C. de Jong, M. BMC PUBLIC HEALTH 14/09/18 Risk factors for multidrug-resistant tuberculosis among tuberculosis patients in Serbia: a case-control study. Although, Serbia is not a high MDR-TB burden country the study has provided baseline information about factors associated with MDR-TB which can support implementation of targeted interventions to decrease number of cases with MDR-TB.

Among socio-demographic factors, we identified that monthly income of the family ≤100 Euro is a risk factor for development of MDR-TB. It means that cases with lower income had almost four times higher risk of developing MDR-TB than controls. In almost 50% of cases, monthly income of the family of MDR TB cases was equal to level of poverty for Serbia, significantly lower than the corresponding general population [16]. These data are alarming given the circumstances that country does not allocate funds for social welfare payments for these patients.

We found that the default from treatment is statistically significant independent risk factor associated with MDR-TB as confirmed by different studies in different countries [21–23]. THE LANCET 22/03/18 Genetic sequencing for surveillance of drug resistance in tuberculosis in highly endemic countries: a multi-country population-based surveillance study. GERMAN CENTRE FOR INFECTION RESEARCH 10/01/18 Improved prediction of tuberculosis bacteria resistance. 10 January 2018 - PRESS RELEASE An international tuberculosis consortium—including the Research Center Borstel—has succeeded in developing a standardised and internationally recognised method that is able to better predict in tuberculosis bacteria resistance in future. Their findings were published in the European Respiratory Journal. Mycobacterium tuberculosis© cdc/James Archer Tuberculosis (TB) is one of the most dangerous infectious diseases worldwide: in 2016 alone, 10.4 million contracted TB and 1.7 million died of the consequences of infection.

GERMAN CENTRE FOR INFECTION RESEARCH 15/01/18 Genome analysis confirms Europe-wide multidrug-resistant tuberculosis outbreak. 15 January 2018 - PRESS RELEASE The National Reference Center at the Research Center Borstel has confirmed a Europe-wide outbreak of a multidrug-resistant Mycobacterium tuberculosis strain in 29 refugees from the Horn of Africa. The Research Center Borstel as well as the European Centre for Disease Prevention and Control, the Robert Koch Institute and the University of Zurich’s National Reference Center for Mycobacteria were involved in the coordination of this Europe-wide investigation. The results have now been published in the renowned journal The Lancet Infectious Diseases.

Documents CDC. The worldwide epidemic of multidrug-resistant tuberculosis : The Lancet Infectious Diseases. WHO estimates that a third of the world's population is infected with Mycobacterium tuberculosis. In 2009, there were almost 9 million new cases of tuberculosis and the disease killed almost 1 million people around the world. Since the discovery of the BCG vaccine, and the development of new antibiotics in the 1950s, the incidence of tuberculosis has fallen substantially. From 1995 to 2009, about 49 million people received treatment for the disease, 41 million of whom were cured, saving up to 6 million. However, multidrug-resistant (MDR) tuberculosis—ie, resistance to two of the most potent drugs, rifampicin and isoniazid—threatens to turn the tide against the medical advances of the past century. PLOS 16/06/11 Dynamics of Antibiotic Resistant Mycobacterium tuberculosis during Long-Term Infection and Antibiotic Treatment.

For an infecting bacterium the human body provides several potential ecological niches with both internally (e.g. host immunity) and externally (e.g. antibiotic use) imposed growth restrictions that are expected to drive adaptive evolution in the bacterium, including the development of antibiotic resistance. To determine the extent and pattern of heterogeneity generated in a bacterial population during long-term antibiotic treatment, we examined in a monoclonal Mycobacterium tuberculosis infection antibiotic resistant mutants isolated from one patient during a 9-years period.