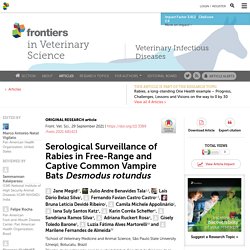 The etiological agent is the RNA virus belonging to the family Rhabdoviridae and genus Lyssavirus, and it is a zoonosis distributed worldwide that now affects mainly low-income countries (2). Rabies virus is transmitted by contact with infected saliva through bites or scratches. Dogs are the main reservoir of rabies and are responsible for most fatal cases in humans worldwide (2). VIRUSES 04/09/21 Renewed Public Health Threat from Emerging Lyssaviruses. All articles published by MDPI are made immediately available worldwide under an open access license. 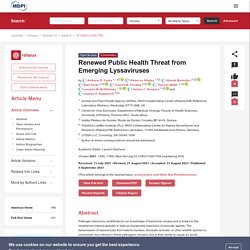 No special permission is required to reuse all or part of the article published by MDPI, including figures and tables. For articles published under an open access Creative Common CC BY license, any part of the article may be reused without permission provided that the original article is clearly cited. Feature Papers represent the most advanced research with significant potential for high impact in the field. Feature Papers are submitted upon individual invitation or recommendation by the scientific editors and undergo peer review prior to publication.

The Feature Paper can be either an original research article, a substantial novel research study that often involves several techniques or approaches, or a comprehensive review paper with concise and precise updates on the latest progress in the field that systematically reviews the most exciting advances in scientific literature. VIRUSES 20/05/21 Assessing Rabies Vaccine Protection against a Novel Lyssavirus, Kotalahti Bat Lyssavirus. Rabies is a fatal encephalitis caused by an important group of viruses within the Lyssavirus genus. 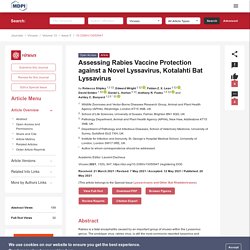 The prototype virus, rabies virus, is still the most commonly reported lyssavirus and causes approximately 59,000 human fatalities annually. The human and animal burden of the other lyssavirus species is undefined. The original reports for the novel lyssavirus, Kotalahti bat lyssavirus (KBLV), were based on the detection of viral RNA alone. VIRUSES 20/03/21 Towards Development of an Anti-Vampire Bat Vaccine for Rabies Management: Inoculation of Vampire Bat Saliva Induces Immune-Mediated Resistance. The common vampire bat (Desmodus rotundus) is a hematophagous species responsible for paralytic rabies and bite damage that affects livestock, humans and wildlife from Mexico to Argentina. 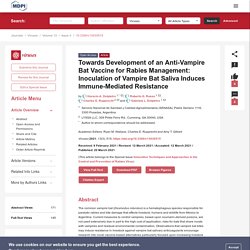 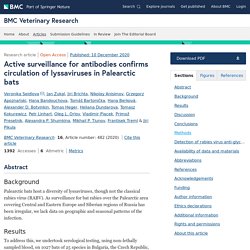 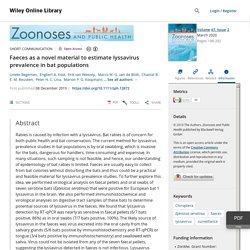 This makes bat rabies of concern for both public health and bat conservation. There is limited knowledge on the epidemiology of bat rabies hampering the application of preventive measures. Therefore, we should improve our strategies to investigate free‐ranging bat populations for rabies prevalence. WILDLIFE RESEARCH 01/05/17 One Health messaging about bats and rabies: how framing of risks, benefits and attributions can support public health and wildlife conservation goals. Bat Conservation International (2015). 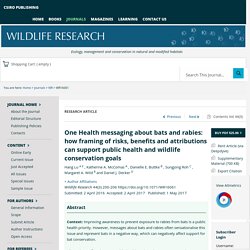 Bats and rabies: a public health guide. Available at [verified 7 April 2017]. Bexell, S. M., and Feng, R. X. (2013). THE LANCET 31/10/17 Comparative pathogenesis of rabies in bats and carnivores, and implications for spillover to humans. PLOS 05/03/18 Pathogenesis of bat rabies in a natural reservoir: Comparative susceptibility of the straw-colored fruit bat (Eidolon helvum) to three strains of Lagos bat virus. Abstract Rabies is a fatal neurologic disease caused by lyssavirus infection. 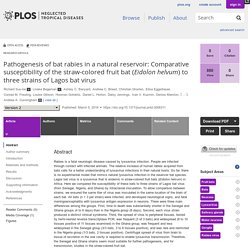 People are infected through contact with infected animals. The relative increase of human rabies acquired from bats calls for a better understanding of lyssavirus infections in their natural hosts. So far, there is no experimental model that mimics natural lyssavirus infection in the reservoir bat species. Lagos bat virus is a lyssavirus that is endemic in straw-colored fruit bats (Eidolon helvum) in Africa. PLOS 04/10/17 Protection of bats (Eptesicus fuscus) against rabies following topical or oronasal exposure to a recombinant raccoon poxvirus vaccine. Abstract Rabies is an ancient neglected tropical disease that causes tens of thousands of human deaths and millions of cattle deaths annually. 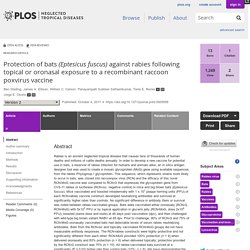 In order to develop a new vaccine for potential use in bats, a reservoir of rabies infection for humans and animals alike, an in silico antigen designer tool was used to create a mosaic glycoprotein (MoG) gene using available sequences from the rabies Phylogroup I glycoprotein. This sequence, which represents strains more likely to occur in bats, was cloned into raccoonpox virus (RCN) and the efficacy of this novel RCN-MoG vaccine was compared to RCN-G that expresses the glycoprotein gene from CVS-11 rabies or luciferase (RCN-luc, negative control) in mice and big brown bats (Eptesicus fuscus).

F1000RESEARCH 23/02/17 Lyssaviruses and rabies: current conundrums, concerns, contradictions and controversies. Introduction Rabies is not a simple long-ago vestige, nightmarish myth, or literary allegory but rather a significant viral encephalitis with the highest case fatality of any conventional infectious disease. 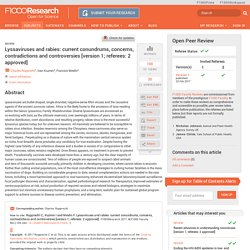 Who else, besides those afflicted and affected, should care about rabies today? Legions—including the true animal lover, anthropologist, administrator, caver, educator, environmentalist, farmer, medical professional, traveler, health economist, hiker, historian, humanist, industrialist, legislator, modeler, philanthropist, sociologist, student, conservation biologist, and life scientist, to name a few by vocation or avocation—curious for elevated self and situational awareness, caring for the common good, intrigued by this view of life from an applied microbiological and ecological perspective or challenged by the allure for professional intervention in nature, represented by the less-than-apparent “non-low-hanging fruit”.

Table 1. An evolving viral taxonomy: what is in a name? PLOS 25/05/16 A One Health Message about Bats Increases Intentions to Follow Public Health Guidance on Bat Rabies. Abstract Since 1960, bat rabies variants have become the greatest source of human rabies deaths in the United States. Improving rabies awareness and preventing human exposure to rabid bats remains a national public health priority today. Concurrently, conservation of bats and the ecosystem benefits they provide is of increasing importance due to declining populations of many bat species. This study used a visitor-intercept experiment (N = 521) in two U.S. national parks where human and bat interactions occur on an occasional basis to examine the relative persuasiveness of four messages differing in the provision of benefit and uncertainty information on intentions to adopt a rabies exposure prevention behavior.

We found that acknowledging benefits of bats in a risk message led to greater intentions to adopt the recommended rabies exposure prevention behavior without unnecessarily stigmatizing bats. Editor: David O. PLOS NEGLECTED TROPICAL DISEASES 30/12/16 The Global Phylogeography of Lyssaviruses - Challenging the 'Out of Africa' Hypothesis. Abstract Rabies virus kills tens of thousands of people globally each year, especially in resource-limited countries. Yet, there are genetically- and antigenically-related lyssaviruses, all capable of causing the disease rabies, circulating globally among bats without causing conspicuous disease outbreaks. The species richness and greater genetic diversity of African lyssaviruses, along with the lack of antibody cross-reactivity among them, has led to the hypothesis that Africa is the origin of lyssaviruses.

This hypothesis was tested using a probabilistic phylogeographical approach. The nucleoprotein gene sequences from 153 representatives of 16 lyssavirus species, collected between 1956 and 2015, were used to develop a phylogenetic tree which incorporated relevant geographic and temporal data relating to the viruses. Author Summary. PLOS 08/08/16 Serological Evidence of Lyssaviruses among Bats on Southwestern Indian Ocean Islands. Abstract We provide serological evidence of lyssavirus circulation among bats on southwestern Indian Ocean (SWIO) islands. A total of 572 bats belonging to 22 species were collected on Anjouan, Mayotte, La Réunion, Mauritius, Mahé and Madagascar and screened by the Rapid Fluorescent Focus Inhibition Test for the presence of neutralising antibodies against the two main rabies related lyssaviruses circulating on the African continent: Duvenhage lyssavirus (DUVV) and Lagos bat lyssavirus (LBV), representing phylogroups I and II, respectively.

“Another horse showing similar symptoms was euthanised at the same property five days earlier,” Thompson said. “There are 20 other horses on the property. “The site will remain under quarantine while further testing is conducted on the remaining horses.” Thompson said the horse had tested negative for Hendra virus, but further testing returned a positive result for ABLV, which is carried by bats and flying foxes. Staff from the Darling Downs Hospital and Health Service Public Health Unit will visit the property to assess the situation and identify any human potentially exposed to the horse. The virus causes severe brain swelling. CDC EID - SEPT 2013 – Au sommaire notamment:Enzootic and Epizootic Rabies Associated with Vampire Bats, Peru