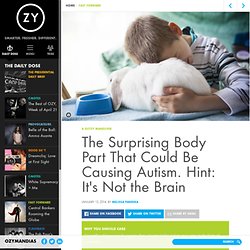 But trouble in the gut can also affect the brain. This two-way relationship may be an unlikely key to solving one of medicine’s most pressing — and perplexing — mysteries: autism. Nearly 60 years after the disorder was first identified, the number of cases has surged, and the United Nations estimates that up to 70 million people worldwide fall on the autism spectrum. Yet there is no known cause or cure. The gut bacteria in autistic individuals aren’t just different… they may actually contribute to the disorder. But scientists have found promising clues in the gut.

Today autism is treated primarily through behavioral therapy. Autism is a complex spectrum of disorders that share three classic features — impaired communication, poor social engagement and repetitive behaviors. Treatment for autism may one day come in the form of a probiotic — live, ’friendly’ bacteria like those found in yogurt. 7 Biggest Lies Spread by the Anti-Vaccine Movement, Debunked by Science. 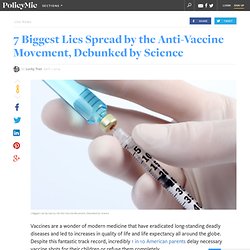 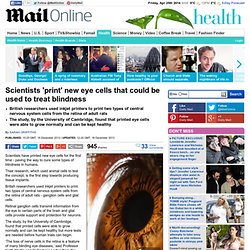 Their research, which used animal cells to test the concept, is the first step towards producing tissue implants. British researchers used inkjet printers to print two types of central nervous system cells from the retina of adult rats - ganglion cells and glial cells. Retinal ganglion cells transmit information from the eye to certain parts of the brain and glial cells provide support and protection for neurons. However, 3D printing of cells can present challenges. Cancer victim growing a new nose in his arm: Businessman who lost organ to disease hopes to have new one sewn on to his face. British man, 56, who is being kept annonymous, lost his nose to skin cancer Experts at University College London hope it will have a sense of smellProfessor Alex Seifalian said the nose will be the same as the man's orginalIt is the first time a nose has been grown from scratch and scientists say it procedure could be used to help car crash victims and wounded soldiers By Fiona Macrae Science Correspondent Published: 22:31 GMT, 22 January 2013 | Updated: 13:51 GMT, 23 January 2013 A British businessman who lost his nose to cancer is growing a new one – in his arm. 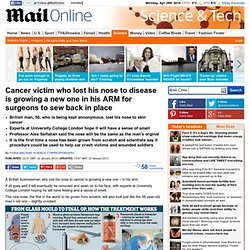 If all goes well it will eventually be removed and sewn on to his face, with experts at University College London hoping he will have feeling and a sense of smell. The new nose, the first in the world to be grown from scratch, will also look just like the 56-year-old man’s old one – slightly crooked. Around two months ago, when the framework was ready, it replaced the balloon under the stretched skin. Benefits of statins are exaggerated and not the best way to prevent heart disease, study claims. NHS spends £450million a year on cholesterol-lowering drugsMost are prescribed as a preventative measure for heart disease, however experts admit they find it difficult to predict who is at risk By Claire Bates Published: 11:50 GMT, 9 August 2012 | Updated: 15:32 GMT, 9 August 2012 Cure-all? 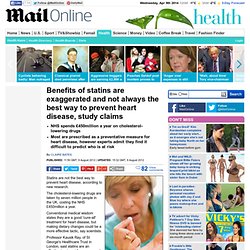 Statins have had no effect on Britain's heart disease rate, study claims Statins are not the best way to prevent heart disease, according to new research. The cholesterol-lowering drugs are taken by seven million people in the UK, costing the NHS £450million a year. Conventional medical wisdom states they are a good 'cure-all' treatment for heart disease, but making dietary changes could be a more effective tactic, say scientists. Professor Kausik Ray, of St George's Healthcare Trust in London, said statins are an effective treatment for many people with heart problems, especially if they have already had a heart attack or stroke. Rise of Robodoc: They can operate on everything from your heart to creaky knees - but would you put your life into the hands of a robot surgeon? 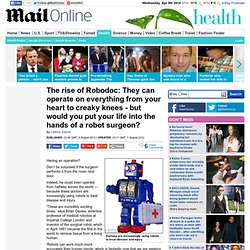 Don’t be surprised if the surgeon performs it from the room next door. Indeed, he could even operate from halfway across the world — because these doctors are increasingly using robots to treat disease and injury. ‘These are incredibly exciting times,’ says Brian Davies, emeritus professor of medical robotics at Imperial College London and inventor of the surgical robot, which in April 1991 became the first in the world to remove tissue from a living human. ‘Robots can work much more accurately than human hands, which is fantastic now that we are seeking minimally invasive surgery through a tiny incision where precision is key,’ says Professor Davies. Robots are still only in a handful of centres as we await long-term evidence comparing their accuracy with traditional methods. Freehand is a robot arm which does this job.