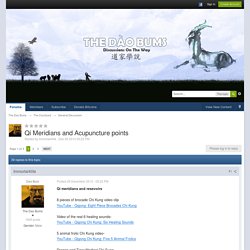 Meridian (Chinese medicine) The meridian system (simplified Chinese: 经络; traditional Chinese: 經絡; pinyin: jīngluò, also called channel network) is a traditional Chinese medicine (TCM) belief about a path through which the life-energy known as "qi" flows.[1][2][3][4] A 2001 review found little evidence to support the existence or function of qi or acupuncture meridians.[5] However, more recent studies confirm that the meridians and acupoints have many biophysical properties such as electric, thermal, acoustic, optical, magnetic, isotopic, and myoelectric characteristics, which are different from those of non-acupuncture points.[6] The meridian network is typically divided into 2 categories, the jingmai (經脈) or meridian channels and the luomai (絡脈) or associated vessels (sometimes called "collaterals"). 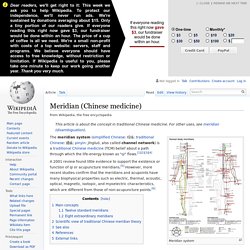 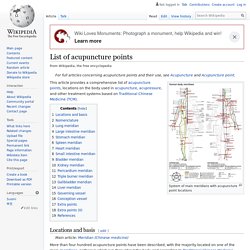 Locations and basis[edit] Although many hypotheses have been proposed, the anatomical and physiological basis for acupuncture points and meridians remains elusive.[2] Hypotheses include neural signaling, with possible involvement of opioid peptides, glutamate, and adenosine, and correspondence to responsive parts in the central nervous system; or mechanical signaling, with involvement of connective tissue (fascia), and mechanical wave activation of the calcium ion channel to beta-endorphin secretion.[3] In practice, acupuncture points are located by a combination of anatomical landmarks, palpation, and feedback from the patient.[1] Twelve Primary Meridians: Eight Extraordinary Meridians 奇 經 八 脈 (奇 经 八 脉), qí jīng bā mài (qí jīng bā mò):

Acupuncture point. Despite considerable efforts to understand the anatomy and physiology of the "acupuncture points", the definition and characterization of these points remains controversial.[1] "There is ... no compelling scientific evidence for the existence of either meridians or acupuncture points. 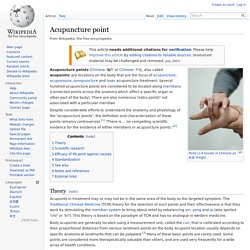 "[2] Theory[edit] Points tend to be located where nerves enter a muscle, the midpoint of the muscle, or at the enthesis where the muscle joins with the bone.[4] Location by palpation for tenderness is also a common way of locating acupoints (see also trigger point). Points may also be located by feeling for subtle differences in temperature on the skin surface or over the skin surface, as well as changes in the tension or "stickiness" of the skin and tissue. Body acupoints are referred to either by their traditional name, or by the name of the meridian on which they are located, followed by a number to indicate what order the point is in on the meridian. 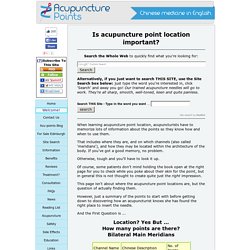 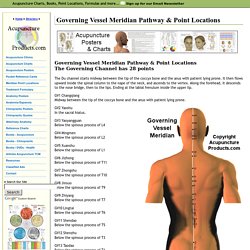 It then flows upward inside the spinal column to the nape of the neck, and ascends to the vertex. Along the forehead, it descends to the nose bridge, then to the lips. 20 Acupuncture Points Every Martial Artist Should Know: Part 1 – Internal Arts International. A basic knowledge of acupuncture points (acu-points) is an invaluable tool for the martial artist. 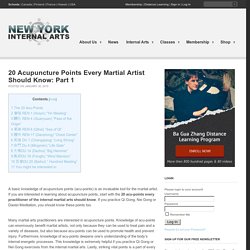 If you are interested in learning about acupuncture points, start with the 20 acu-points every practitioner of the internal martial arts should know. If you practice Qi Gong, Nei Gong or Daoist Meditation, you should know these points too. Many martial arts practitioners are interested in acupuncture points. Knowledge of acu-points can enormously benefit martial artists, not only because they can be used to treat pain and a variety of diseases, but also because acu-points can be used to promote health and prevent injury. Furthermore, knowledge of acu-points deepens one’s understanding of the body’s internal energetic processes. My observation is that a lot of martial arts practitioners begin to learn about points and then quickly give up, because the science of acu-points seems like a difficult and insurmountable task.