Lessons; How to Ease the Burden Of Homework for Families. IT is a ''second shift.'' 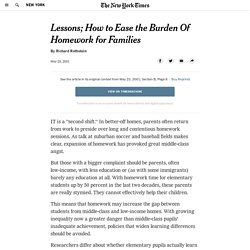 Who’s still crowding into TTC buses amid the pandemic? Evidence suggests many are Toronto’s working poor. Questioning Payne. Tory election candidate says disabled people should be paid less as they ‘don’t understand money’ A Conservative candidate has told voters that disabled people and those with learning disabilities should be paid less because some “don’t understand money”. 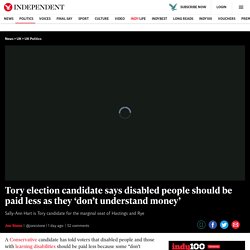 Sally-Ann Hart, the Tory candidate for the marginal seat of Hastings and Rye, was met with jeers and boos when she made the comments at an election hustings this week. “Some people with learning difficulties, they don’t understand money,” she said, in an exchange that was captured on video. Download the new Indpendent Premium app Sharing the full story, not just the headlines. ‘How arrogant’: Anti-poverty advocates slam Sask. Income Support program. Several Regina anti-poverty advocates met to express concern about the new Saskatchewan Income Support (SIS) Program on Thursday morning. 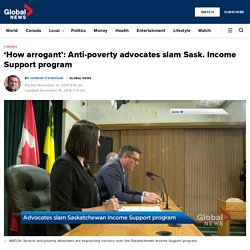 “There’s fundamental flaws with it and really the fundamental flaw is a lack of adequacy,” said Peter Gilmer, of the Regina Anti-Poverty Ministry. “We’ve never had benefits that met actual basic needs. Locating Citizenship: Curriculum, Social Class, and the ‘Good’ Citizen: Theory & Research in Social Education: Vol 38, No 3. ‘Just like us:’ Photo gallery aims to break down poverty stereotypes. When Scott Aspinall started asking people in Regina struggling with homelessness about their stories three years ago, he came face-to-face with an array of stereotypes people in poverty face on a daily basis. 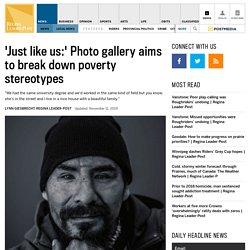 As co-founder of MayBell Developments — a Regina non-profit that seeks to empower those in poverty — with his wife Tori, Aspinall often saw the negative impact these stereotypes had. The couple decided they wanted to understand the individual people behind the labels. How Highly Educated People End Up on the Streets - Invisible People. Looks can be deceiving. 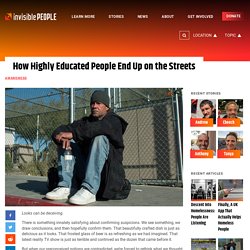 There is something innately satisfying about confirming suspicions. We see something, we draw conclusions, and then hopefully confirm them. (21) Esther Duflo: Social experiments to fight poverty. Ontario cuts reflect idea that people deserve to be poor. As a community mental health social worker in downtown Toronto, I encounter the most extreme conditions of poverty and social inequality in the city. 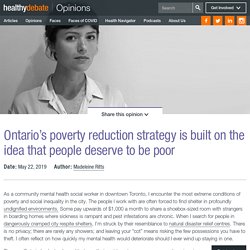 Extreme Inequality Is Not Driven by Merit, but by Rent-Seeking and Luck. By Didier Jacobs and Sam Pizzigati Defenders of our deeply unequal global economic order had to put in a bit of overtime last month. 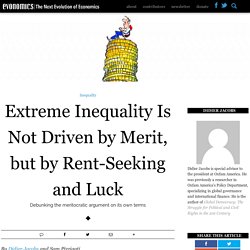 They had to explain away the latest evidence — from the global charity Oxfam — on how concentrated our world’s wealth has become. Column: The claim that if wages go up, jobs will go down is not a theory — it’s a scam. Editor’s Note: This column is reproduced with permission from democracyjournal.org. 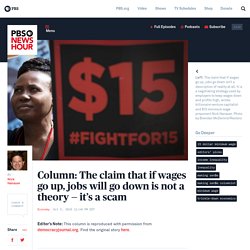 Find the original story here. Few issues have moved more quickly from fringe to consensus than the “Fight for $15.” When colleagues and I suggested at a Democratic political conference in early November 2012 that we should raise the minimum wage to $15, people in the audience literally laughed. When New York City fast-food workers first walked off the job two weeks later demanding a $15 minimum wage (more than twice the federal $7.25 rate, both then and now), the number was widely dismissed as overreaching and symbolic — a mere bargaining tactic on the part of workers who had little if any bargaining power at all. Working a Lot, for a Little: Low-Wage Workers Struggle to Get By.

The battles over minimum wage increases tend to be fought with statistics and conflicting economic reports. 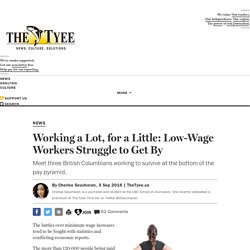 The more than 120,000 people being paid minimum wage in British Columbia — about five per cent of workers — and the 380,000 other people who fall into the low-wage category are usually lost in political rhetoric. B.C.’s minimum wage, at $10.45, is the lowest in Canada. An increase to $10.85 on Sept. 15 will still leave a single minimum-wage worker in Vancouver $5,500 below the poverty line. Even in smaller, more affordable cities, people on minimum wage are still $2,000 below the poverty line.

Don’t Make Housing for the Poor Too Cozy, Carson Warns. COLUMBUS, Ohio — Ben Carson does not like the creature comforts, at least not for low-income Americans reliant on the government for a helping hand. 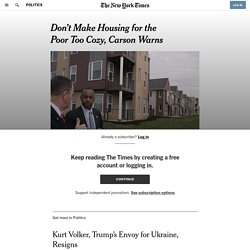 As he toured facilities for the poor in Ohio last week, Mr. The loud silence of queer poverty. As I write this, the average market rent for a one-bedroom apartment in Toronto is $1,200. Nearly half of the city, 47 per cent, spends over a third of their income on rent, meaning that – without dipping into savings, which many don’t have – they are one missed paycheque away from losing their homes or going without food. Of Toronto’s homeless population, over 11 per cent are two-spirited, lesbian, gay, bisexual, transgender, and/or queer (2S-LGBTQ). Among youth, that number ranges from 24 to 40 per cent, depending on which researcher you ask. Poverty in Canada — Canadian Poverty Institute. The Canadian Poverty Institute understands poverty to be multi-dimensional involving material, social and spiritual poverty. Material poverty exists where people lack access to, or the skills to acquire, sufficient material and financial resources to thrive.Social poverty exists where people are isolated and lack the formal and informal supports necessary to be resilient in times of crisis and change.Spiritual poverty exists where people lack meaning in their lives and connection to a faith community that sustains them.

Considering Canada's wealth and resources, a disproportionate number of Canadians are living in poverty. Poverty affects millions of Canadians. Income inequality is growing and recent estimates indicate over 14% of Canadians suffer from low income. (20) I live in real poverty, and it's not what you think – Kathleen Kerridge. How Dual Enrollment Contributes to Inequality. Schools Are Good for Showing Off, Not for Learning.

Suppose you are a student in a high school or college course and a magic fairy offers you the following choice: (1) You will learn the material in the course well, but will get a low grade (a D). Or (2) you will not learn the material at all, but will get a high grade (an A). Which would you choose? Be honest. article continues after advertisement. Ontario cuts reflect idea that people deserve to be poor. Advice I would have given myself ten years ago – Organizing Work. The author, who prefers to remain anonymous, worked for several years as a field organizer for the largest public sector trade unions in the US, before becoming a teacher in a large urban district. He now organizes with his coworkers and students, most recently to secure greater education funding and driver’s licenses for undocumented immigrants.

I’ve been thinking about the advice I would have given myself ten years ago about getting involved in organizing. Let’s talk about the Gilmore Girls’ awful Life And Death Brigade. Charities want to make an impact. But poverty porn is not the way. On a plate. On a plate. The Disturbing History of the Suburbs. Intergenerational Income Mobility: New Evidence from Canada. By Wen-Hao Chen and Yuri Ostrovsky, Social Analysis and Modelling Division Patrizio Piraino, University of Cape Town, South Africa Release date: June 17, 2016 Correction date: (if required) Skip to text Text begins Start of text box This Economic Insights article examines the extent to which the lifetime income of children is correlated with the lifetime income of their fathers—a topic known as intergenerational income mobility. End of text box Social mobility is often seen as a broad measure of equality of opportunity.

This American Life. Ketchup sandwiches and other things stupid poor people eat. I met this woman named Mae. Explaining White Privilege to a Broke White Person... Years ago, some feminist on the internet told me I was "Privileged. " Why working-class sitcoms don't work. Class Representation within Sitcoms Since 1950's. Social class is categorized by individuals who occupy a similar position in the economic system within society. An Error Occurred Setting Your User Cookie.