Too Much Medicine: some reflections - Students 4 Best Evidence. Posted on May 19, 2017 The concept of ‘too much medicine’ reflects a growing concern in the medical community regarding the over-testing, over-diagnosis and over-treatment of various pathologies. 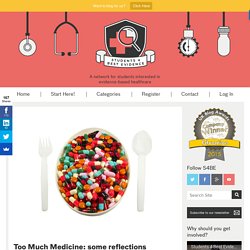 In the past few decades, the number of people diagnosed with diseases or risk factors like high blood pressure, cancer, and asthma have dramatically increased, and hence the number of people being treated for these problems has also increased [1][2][3]. Screening and overdiagnosis: public health implications. When evidence says no, but doctors, patients, and the system say yes. There is an interesting article from ProPublica called When evidence says no, but doctors say yes making the rounds about the number of doctors who disbelieve, or don’t know, or don’t care about the medical evidence to the detriment of patients. 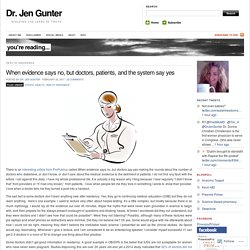 I do not find any fault with the article. I rail against this daily. I have my whole professional life. It is actually a big reason why I blog because I hear regularly “I didn’t know that” from providers or “If I had only known,” from patients. Turning Value-Based Health Care into a Real Business Model - NEJM Catalyst. The shift from volume-based to value-based health care is inevitable. 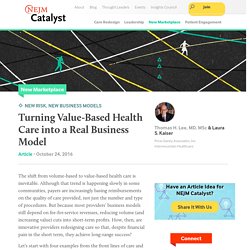 Although that trend is happening slowly in some communities, payers are increasingly basing reimbursements on the quality of care provided, not just the number and type of procedures. But because most providers’ business models still depend on fee-for-service revenues, reducing volume (and increasing value) cuts into short-term profits. How, then, are innovative providers redesigning care so that, despite financial pain in the short term, they achieve long-range success?

Let’s start with four examples from the front lines of care and then step back to see what deeper strategic advantages all of them have in common. At Intermountain Medical Group clinics, mental health care is integrated with primary care as a default practice, first piloted 15 years ago. The American College of Radiology (ACR), in 1993, developed clinical practice guidelines for radiologic services.

When Evidence Says No, but Doctors Say Yes - The Atlantic. First, listen to the story with the happy ending: At 61, the executive was in excellent health. 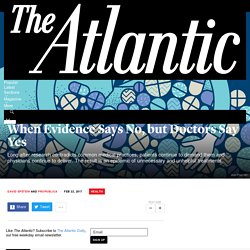 His blood pressure was a bit high, but everything else looked good, and he exercised regularly. Then he had a scare. He went for a brisk post-lunch walk on a cool winter day, and his chest began to hurt. Back inside his office, he sat down, and the pain disappeared as quickly as it had come. The real challenge to Canada’s health system is not wait times. Canada has some of the longest waits for medical care in the developed world. 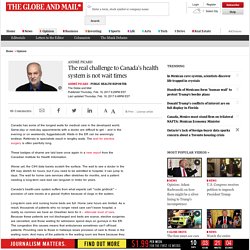 Same-day or next-day appointments with a doctor are difficult to get – and in the evening or on weekends, fuggedaboutit. Waits in the ER can be seemingly endless. Referrals to specialists result in lengthy waits. The wait for elective surgery is often painfully long. These badges of shame are laid bare once again in a new report from the Canadian Institute for Health Information. Worse yet, the CIHI data barely scratch the surface. Canada’s health-care system suffers from what experts call “code gridlock” – provision of care moves at a glacial rhythm because of clogs in the system.

Long-term care and nursing home beds are full. In Canada, our response – at least whenever things become serious enough to generate newspaper headlines and make politicians uncomfortable – is to throw money and bodies at the most visible problems. One fifth of health spending is wasted, says OECD official. Speaking at UK health think-tank the King’s Fund today, Mark Pearson, deputy director for employment, labour and social affairs at the OECD, said that number was a “guesstimate”, but “defendable figure”. 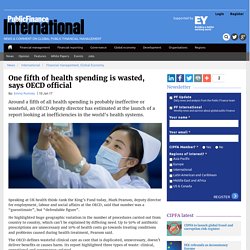 He highlighted huge geographic variation in the number of procedures carried out from country to country, which can’t be explained by differing need. Up to 50% of antibiotic prescriptions are unnecessary and 10% of health costs go towards treating conditions and problems caused during health treatment, Pearson said. The OECD defines wasteful clinical care as care that is duplicated, unnecessary, doesn’t deliver benefits or causes harm. Its report highlighted three types of waste: clinical, operational and governance-related. Another speaker, Dr Catherine Calderwood, chief medical officer for Scotland, highlighted another example. Operational waste occurs when care could be provided with fewer resources while maintaining the benefits. 2016 update on medical overuse. Question Which research articles published in 2015 best illuminate important aspects of the current state of medical overuse? 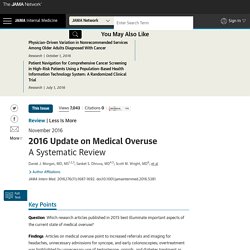 Findings Articles on medical overuse point to increased referrals and imaging for headaches, unnecessary admissions for syncope, and early colonoscopies; overtreatment was highlighted by unnecessary use of testosterone, opioids, and diabetes treatment as well as anticoagulation for atrial fibrillation. Reports also suggest a need for reconsideration of current practices for managing Clostridium difficile, low-back pain, and thyroid nodules. Meaning The number of articles on overuse nearly doubled from 2014 to 2015, indicating that awareness of overuse is increasing, despite little evidence of improved practice.

Importance Overuse of medical care is an increasingly recognized problem in clinical medicine. Trevor Hancock: The secret of medicine is masterly inactivity. I was trained in medicine almost 50 years ago at a very old and traditional teaching hospital in London, England — Bart’s. 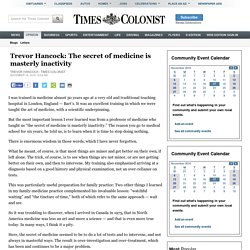 It was an excellent training in which we were taught the art of medicine, with a scientific underpinning. But the most important lesson I ever learned was from a professor of medicine who taught us “the secret of medicine is masterly inactivity.” The reason you go to medical school for six years, he told us, is to learn when it is time to stop doing nothing.

There is enormous wisdom in those words, which I have never forgotten. What he meant, of course, is that most things are minor and get better on their own, if left alone. The complete history and physical examination in primary care: a medical student's view. A definition and ethical evaluation of overdiagnosis. The abstract/extract view of this article is free (link available in right hand box). 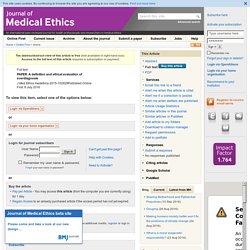 Access to the full text of this article requires a subscription or payment. To view this item, select one of the options below: Survey of public definitions of the term ‘overdiagnosis’ in the UK. Objectives To determine how ‘overdiagnosis’ is currently conceptualised among adults in the UK in light of previous research, which has found that the term is difficult for the public to understand and awareness is low. 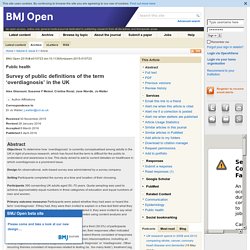 This study aimed to add to current debates on healthcare in which overdiagnosis is a prominent issue. Design An observational, web-based survey was administered by a survey company. Setting Participants completed the survey at a time and location of their choosing. Diagnosing overdiagnosis: conceptual challenges and suggested solutions. Overtreatment in threshold and developed countries. Archives of Disease in Childhoodadc.bmj.com 2008;93:260-263 doi:10.1136/adc.2007.124479 Review B Frey B Frey, Department of Intensive Care and Neonatology, University Children’s Hospital, CH-8032 Zurich, Switzerland; Bernhard.Frey@kispi.uzh.ch Accepted 4 September 2007 Published Online First 14 September 2007. Too much medicine? Public Opinions about Overdiagnosis: A National Community Survey: EBSCOhost. Toward a sustainable and wise healthcare approach: potential contributions from hospital Internal Medicine Departments to reducing inappropriate medical spending.

Introduction According to the latest data from the Ministry of Health, in Italy, over the past ten years health spending has increased from 76 to slightly less than 113 billion euro, with a growth of approximately 37 billion euro. Government data for the year 20111 have shown that Italian public healthcare spending is equivalent to 7.1% of gross domestic product (GDP), and 1842 euro per capita per year. In a comparison between Italy and the European Union, the incidence of public health expenditure on GDP in the year 2009 was 7.3%, compared to 8.2% reported in Europe, highlighting the fact that on average, in Italy, we spend less on healthcare. Defensive medicine. Too much medicine is not just a problem of rich countries.

South Asia needs better recognition of the manifestations and drivers of overdiagnosis One memory of medical school stays with me. It was our first day in clinical medicine, and we would be meeting a widely respected and feared professor. “Why have you taken up medicine?” Less Is More:  How Less Health Care Can Result in Better Health. 'Less Is More': The Next Big Thing for Medicine. What are the risks of overtreating the many to help the few? Most health-conscious people are familiar with the concept of risk factors for disease. We’re too familiar, in fact. A risk factor is like the guest that nobody invited to the party, a spoiler. Though we might feel fine now, our individual risk for (fill in the blank) tells us that our wellbeing might not last. That vague and remote prospect of a stroke or a tumour has taken on a sharply numerical precision, thanks to screening tests that expose and quantify our risk factors. The term stems from the Framingham Heart Study, which began in 1948.

Since no single factor was able to predict the heart attacks that occurred in Framingham, the study designers thought to combine half a dozen of them in what became the first numerical risk calculator, called the Framingham Risk Score. Screening and overdiagnosis: public health implications. 'Less Is More': The Next Big Thing for Medicine. Dear "Skeptics," Bash Homeopathy and Bigfoot Less, Mammograms and War More.

Yesterday I spoke at the Northeast Conference on Science and Skepticism, NECSS, a “celebration of science and critical thinking” held May 12-15 in New York City. More Medical Care Isn’t Always Better. OPINION: Health care fire hose. About Quaternary prevention in Public health ; comment on Dr Jong-Myon Bae paper - Jamoulle Marc. Until the white coats show up, this will amount to little more than a fad. March 9, 2016. Overdiagnosis and overtreatment: generalists — it’s time for a grassroots revolution. Preventing Overdiagnosis - Julian Treadwell. The new holism: P4 systems medicine and the medicalization of health and life itself. How too much medicine can kill you. BC Medical Journal. Overtesting and the Downstream Consequences of Overtreatment: Implications of “Preventing Overdiagnosis” for Emergency Medicine - Carpenter - 2015 - Academic Emergency Medicine.

Update on Medical Practices That Should Be Questioned in 2015. Importance Overuse of medical care, consisting primarily of overdiagnosis and overtreatment, is a common clinical problem. Costly and harmful: we need to tame the tsunami of too much medicine. ABC’s Four Corners program on waste in health care didn’t pull any punches. Safely Doing Less: A Missing Component of the Patient Safety Dialogue. We're overdosing on medicine – it's time to embrace life's uncertainty. Why So Much Of The Health Care We Deliver Is Unnecessary - And What We Can Do About It.

Gawande looks from doctors and patient's viewpoints with heart-wrenching examples to explore what unnecessary care is, how commonplace it is, the factors that drive it, why it is so hard to recognize and overcome. "The one that got me thinking, however, was a study of more than a million Medicare patients. It suggested that a huge proportion had received care that was simply a waste. The researchers called it “low-value care.” But, really, it was no-value care. . . . The forces that have led to a global epidemic of overtesting, overdiagnosis, and overtreatment are easy to grasp. Doctors get paid for doing more, not less. We’re more afraid of doing too little than of doing too much. And patients often feel the same way. They’re likely to be grateful for the extra test done in the name of “being thorough”—and then for the procedure to address what’s found. . . It isn’t enough to eliminate unnecessary care. It has to be replaced with necessary care. And that is the hidden harm: unnecessary care often crowds out necessary care, particularly when the necessary care is less remunerative. " – lessismoremed