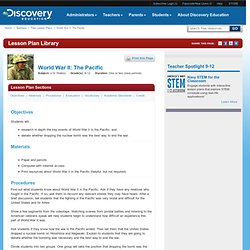 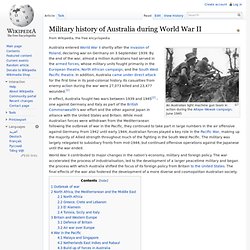 By the end of the war, almost a million Australians had served in the armed forces, whose military units fought primarily in the European theatre, North African campaign, and the South West Pacific theatre. In addition, Australia came under direct attack for the first time in its post-colonial history. Its casualties from enemy action during the war were 27,073 killed and 23,477 wounded.[1] In effect, Australia fought two wars between 1939 and 1945[2] – one against Germany and Italy as part of the British Commonwealth's war effort and the other against Japan in alliance with the United States and Britain.

Anzac Org. Joseph Stalin - Facts & Summary. Joseph Stalin was born Josef Vissarionovich Djugashvili on December 18, 1878, or December 6, 1878, according to the Old Style Julian calendar (although he later invented a new birth date for himself: December 21, 1879), in the small town of Gori, Georgia, then part of the Russian empire. 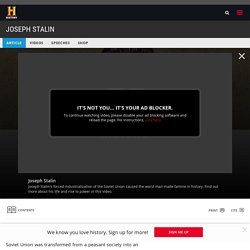 When he was in his 30s, he took the name Stalin, from the Russian for “man of steel.” Stalin grew up poor and an only child. His father was a shoemaker and alcoholic who beat his son, and his mother was a laundress. As a boy, Stalin contracted smallpox, which left him with lifelong facial scars. As a teen, he earned a scholarship to attend a seminary in the nearby city of Tblisi and study for the priesthood in the Georgian Orthodox Church.

After leaving school, Stalin became an underground political agitator, taking part in labor demonstrations and strikes. In 1906, Stalin married Ekaterina “Kato” Svanidze (1885-1907), a seamstress. Stalin's Role in the Second World War. In August 1939, Josef Stalin freed Hitler from his fear of the possibility of a war on two fronts by signing a pact of non-aggression with Germany. 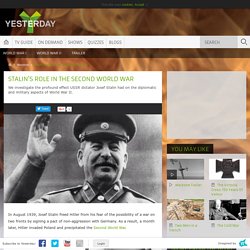 As a result, a month later, Hitler invaded Poland and precipitated the Second World War. But, the security offered by the Brest-Litovsk treaty was short-lived. Hitler's rapid victories in the west made Stalin increasingly nervous. Despite repeated attempts to maintain the terms of the pact, in June 1941 Germany invaded the USSR. At first, Stalin suffered a nervous breakdown and was unable to command the Red Army or delegate effective control. However, within weeks Stalin had recovered. Technology during World War II. Technology played a significant role in World War II. 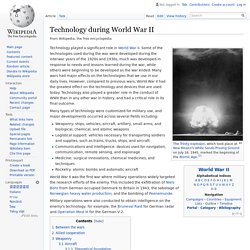 Causes and Motivations — United States Holocaust Memorial Museum. Because the Holocaust involved people in different roles and situations living in countries across Europe over a period of time—from Nazi Germany in the 1930s to German-occupied Hungary in 1944—one broad explanation regarding motivation, for example, “antisemitism or “fear,” clearly cannot fit all. 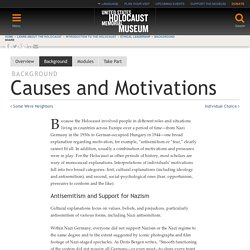 In addition, usually a combination of motivations and pressures were in play. For the Holocaust as other periods of history, most scholars are wary of monocausal explanations. Interpretations of individuals’ motivations fall into two broad categories: first, cultural explanations (including ideology and antisemitism); and second, social-psychological ones (fear, opportunism, pressures to conform and the like). Antisemitism and Support for Nazism. Atomic Bomb. At approximately 8.15am on 6 August 1945 a US B-29 bomber dropped an atomic bomb on the Japanese city of Hiroshima, instantly killing around 80,000 people. 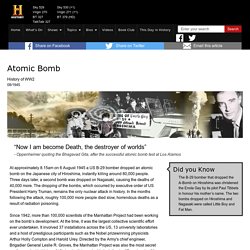 Atomic Heritage Foundation. One of the greatest controversies to come out of World War II was whether the atomic bomb was necessary to bring about the war's end. 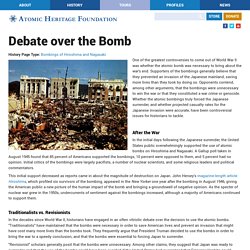 Supporters of the bombings generally believe that they prevented an invasion of the Japanese mainland, saving more lives than they took by doing so. Opponents contend, among other arguments, that the bombings were unnecessary to win the war or that they constituted a war crime or genocide. Whether the atomic bombings truly forced the Japanese surrender, and whether projected casualty rates for the Japanese invasion were accurate, have been controversial issues for historians to tackle. Fall of Singapore: Overview. Fall of Singapore view Australian positions in Singapore 8-15 February 1942. 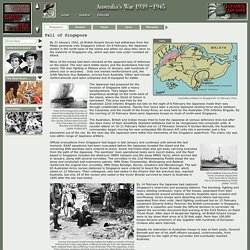 By 31 January 1942, all British Empire forces had withdrawn from the Malay peninsula onto Singapore Island. Remembering 1942: The fall of Singapore. Dr Chris Coulthard-Clark Presented by Dr Chris Coulthard-Clark from the Memorial's Military History Section, on Friday 15 February 2002 beside the Roll of Honour at the Memorial. ( AWM PASU0169) Download the talk - 09:18 min (2.2Mb Mp3) Transcript. 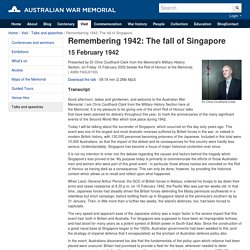 They launched their main offensive on 13 August. Attacks moved inland, concentrating on airfields and communications centres. Fighter Command offered stiff resistance, despite coming under enormous pressure. The Battle of Britain, as it happened on September 15, 1940. On September 16, the Germans moved to a new tactic: terror bombing. Daylight raids were abandoned in favour of what we now call the Blitz. The aim was still to break our spirit, but that was now harder than ever. Britain had won its first real victory of the war, and its value to public morale was incalulable. Sources I am deeply indebted to the following works, upon which I have relied for this account — • Alfred Price — "Battle of Britain Day" and "The Hardest Day" • Stephen Bungay — "The Most Dangerous Enemy" • Tom Neil — "Gun Button to Fire" • Richard Townshend Bickers — "The Battle of Britain" • Winston Churchill — "Their Finest Hour"

Battle of Britain. D-Day - World War II. By dawn on June 6, thousands of paratroopers and glider troops were already on the ground behind enemy lines, securing bridges and exit roads. The amphibious invasions began at 6:30 a.m. The British and Canadians overcame light opposition to capture beaches codenamed Gold, Juno and Sword, as did the Americans at Utah Beach. U.S. forces faced heavy resistance at Omaha Beach, where there were over 2,000 American casualties. However, by day’s end, approximately 156,000 Allied troops had successfully stormed Normandy’s beaches.According to some estimates, more than 4,000 Allied troops lost their lives in the D-Day invasion, with thousands more wounded or missing. Less than a week later, on June 11, the beaches were fully secured and over 326,000 troops, more than 50,000 vehicles and some 100,000 tons of equipment had landed at Normandy.

20 things Dday. D-Day - June 6, 1944: On the Beach. By the end of the day, the Allies had achieved a tenuous toehold that would be laboriously expanded over the next weeks and would lead ultimately to the Nazi defeat in the West. Robert Edlin was a member of the 2nd Ranger Battalion that joined the first wave of the assault on Omaha Beach. We join his story as he his assault craft becomes mired on a sandbar: "Our assault boat hit a sandbar. History - World Wars: Pearl Harbor: A Rude Awakening. Pearl Harbor - World War II. Japanese attacks pearl harbour. Japanese Attack Pearl Harbor — History.com Video. Visual History of War, Religion, and Government. World War II (1939–1945): Overview. Children and World War Two.

Children were massively affected by World War Two. Operation Pied Piper: The Evacuation of English Children During World War II. Primary History - World War 2 - Evacuation. Children of the wartime evacuation. In January 1941, Sheila Shear and her sister were evacuated from east London to the Chilterns and billeted with a bachelor called Harry Mayo. They came from very different backgrounds – the Shears were Jewish, he was Christian – but an affectionate bond developed between them. Weekly visits and holidays with Uncle Harry, as they came to know him, continued long after the war had ended. When Harry died, Sheila and her mother went to the funeral: "When we got to Chesham, we were treated like the closest members of his family. World War 2: Thousands of children sent to safety.