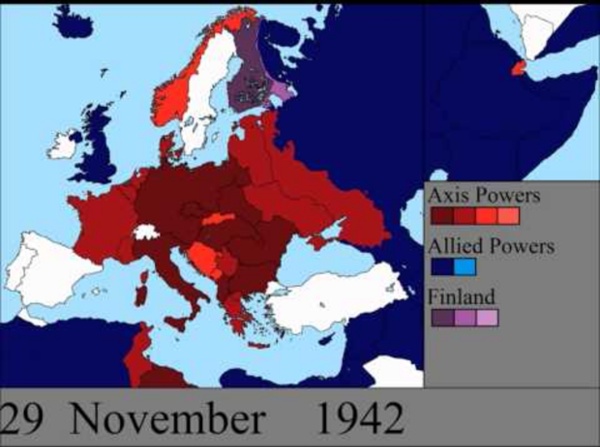 Night Witches A Polikarpov Po-2, similar to the aircraft operated by the Night Witches "Night Witches" is the English translation of Nachthexen, a World War II German nickname (Russian Ночные ведьмы), for the female military aviators of the 588th Night Bomber Regiment, known later as the 46th "Taman" Guards Night Bomber Aviation Regiment, of the Soviet Air Forces. The regiment was formed by Colonel Marina Raskova and led by Major Yevdokia Bershanskaya. The regiment flew harassment bombing and precision bombing missions against the German military from 1942 to the end of the war.[1] At its largest size, it had 40 two-person crews. It flew over 23,000 sorties and is said to have dropped 3,000 tons of bombs. It was the most highly-decorated female unit in the Soviet Air Force, each pilot having flown over 800 missions by the end of the war and twenty-three having been awarded the Hero of the Soviet Union title.

The successful 70-year campaign to convince people the USA and not the USSR beat Hitler In 1945, most French people thought that the Soviet Union deserved the most credit for Nazi Germany's defeat in World War II — even though the Soviets didn't play much of a role in France's liberation, relative to the US and Britain. By 1995 and 2004, however, the French had changed their minds, and were crediting the US as the biggest contributor to victory in Europe: Source: Olivier Berruyer, www.les-crises.fr, via A.X. Ian The French blogger Olivier Berruyer put together the above chart using survey data from the French Institute of Public Opinion. Assessing the "biggest contributor to victory" in a rigorous way is exceptionally difficult.

Digital Humanities 2013 8:30am - 10:00amLP01: Long Paper SessionLocation: Embassy CChair: Edward Vanhoutte Uncovering the “hidden histories” of computing in the Humanities 1949 – 1980: findings and reflections on the pilot project Nyhan, Julianne Digital Textual Studies, Social Informatics, and the Sociology of Texts: A Case Study in Early Digital Medievalism Simpson, Grant Leyton The Network is Everting: the Death of Cyberspace and the Emergence of the Digital Humanities Why the Peaceful Majority is Irrelevant I used to know a man whose family were German aristocracy prior to World War Two. They owned a number of large industries and estates. I asked him how many German people were true Nazis, and the answer he gave has stuck with me and guided my attitude toward fanaticism ever since. “Very few people were true Nazis” he said, “but, many enjoyed the return of German pride, and many more were too busy to care. I was one of those who just thought the Nazis were a bunch of fools.

What Historians Want from GIS By J. B. "Jack" Owens An increasing number of historians, particularly those dealing with world history or the history of large geographic regions, are becoming interested in using geographic information systems for research and teaching. Historians are noticing GIS because they normally deal with processes in complex, dynamic, nonlinear systems and, therefore, demand a means to organize a large number of variables and identify those variables most likely implicated in the stability and transformation of such systems.

Comments to Paul E Marek’s piece: “Why the peaceful majority is irrelevant” My attention was drawn into a piece in the Internet by Paul E. Marek who is a second-generation Canadian, whose grandparents fled Czechoslovakia just prior to the Nazi takeover. In that 2006 piece (an old article), only recently much circulated, he said that the fanatics are on the march and they are essentially controlling the world affairs. He said, "Peace-loving Muslims will become our enemy if they don't speak up, because like my friend from Germany, they will awaken one day and find that the fanatics own them, and the end of their world will have begun." The Historical Society: Visualizing Historiography Dan Allosso As a grad student preparing for Oral Exams, I spend a lot of time in a library carrel with piles of books. I’m trying to keep track of the connections between them, and simultaneously wondering how to think about historiography, for my particular project. Does it make more sense to trace the development of sub-disciplines like new social history?