* 101 Viking Facts from the History Specialists 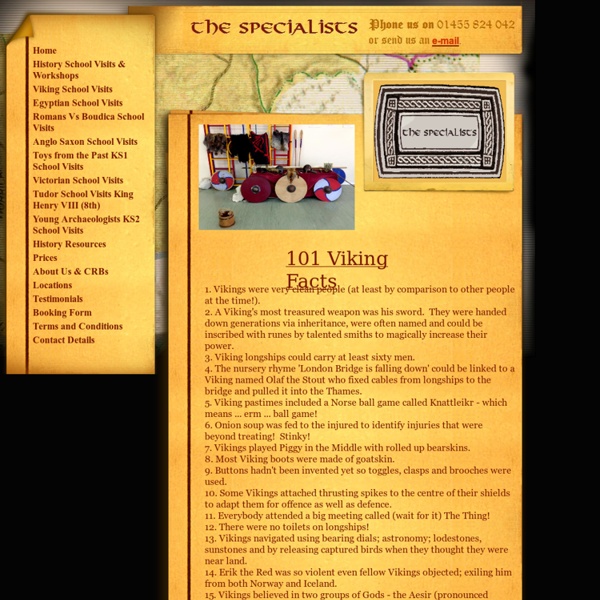 Vikings Homework Help Where did the Vikings settle in Britain? The area eventually settled by Vikings was called the Danelaw. It formed a boundary separating Anglo-Saxon England from Viking England and was defined in a treaty between the English King Alfred and Viking King Guthrum in AD 880. It lay north of Watling Street, a Roman road running from London north-west to Chester and covered northern and eastern England.

Where did the Vikings settle? - Danelaw The areas the Viking settled in were known as Danelaw. It covered an area roughly east of a line on a map joining London and Chester. The Saxons lived south of the line. Grim Gruesome Facts and Fun The character of Grim Gruesome and all the stories about him are imaginary. HOWEVER, all the descriptions of people, places and things in the books have been very carefully researched and are as historically ‘true’ as possible. So reading the Grim Gruesome books will teach you a lot about daily life in the Viking Age. Read on to find out more. Vikings - Exploration The mid-10th-century reign of Harald Bluetooth as king of a newly unified, powerful and Christianized Denmark marked the beginning of a second Viking age. Large-scale raids, often organized by royal leaders, hit the coasts of Europe and especially England, where the line of kings descended from Alfred the Great was faltering. Harald’s rebellious son, Sven Forkbeard, led Viking raids on England beginning in 991 and conquered the entire kingdom in 1013, sending King Ethelred into exile. Sven died the following year, leaving his son Knut (or Canute) to rule a Scandinavian empire (comprising England, Denmark, and Norway) on the North Sea. After Knut’s death, his two sons succeeded him, but both were dead by 1042 and Edward the Confessor, son of the previous (non-Danish) king, returned from exile and regained the English throne from the Danes. Upon his death (without heirs) in 1066, Harold Godwinesson, the son of Edward’s most powerful noble, laid claim to the throne.

Viking Longships - Children's British History Encyclopedia Many Vikings were good sailors because they lived close to rivers and fjords (sea inlets). They grew up from childhood able to use ships for fishing and travelling. A big Viking longship would be about 30 metres long and were made from overlapping planks of oak wood joined together with iron rivets (bits of metal hammered into holes). Each ship could carry 60 men.

10 Things You May Not Know About the Vikings — HISTORY Lists Think you’ve got the Vikings pegged? With all the caricatures and stereotypes out there, there’s probably a lot you’ve never heard about the seafaring Scandinavians who raided and settled coastal sites in the British Isles and beyond between the ninth and 11th centuries. Explore 10 surprising facts about the Vikings below. Ted Spiegel/National Geographic/Getty Images Facts About Viking Food, Farming and Feasts The Vikings are best known as brave and fearsome invaders and warriors, but they were also able farmers and fishermen. Here are some facts about the types of farming and fishing the Vikings relied upon, the foods they would have eaten and their meal time practices and customs. What did the Vikings farm? The Vikings both grew crops and kept animals.The best farmland in the Viking world was located in Denmark and parts of Sweden. On the fertile land in these areas, the Vikings grew: wheat, barley, rye and oats.Flax was also grown and this was turned into linen.The Vikings used a range of farming tools constructed from wood and iron. These included: shovels, picks, hoes, sickles and scythes.Vikings farmers raised sheep, pigs, poultry, goats and cattle.

Bet You Didn't Know: Vikings Video - Vikings My TV provider is not listed. Why not? We are currently working on adding more TV providers. Please check back frequently to see if your TV provider has been added. Why do I need to log in to watch some video content?