Shirley Jackson's Two Worlds. Starting in the late 1970s, Revlon (in)famously peddled its fragrance Enjoli to working women by asserting a woman wearing this scent could not only “bring home the bacon,” but also “fry it up in a pan.” 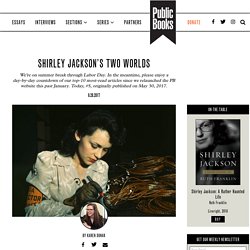 The celebration of the woman who “had it all”—that is, a personal and a professional life—seemingly represented the fruits of 1960s- and 1970s-era feminist activism, which had resulted in a reconsideration of men’s and women’s roles and, theoretically, a restructuring of American life, both public and private. Except, of course, it was never so easy, and there were plenty of women in America who could have testified to that fact.

Even before the Second World War brought a flood of women into the workforce, nearly 25 percent of American women worked full or part time jobs. That number climbed to almost 38 percent by 1960. Shirley Jackson: Possibly a Witch, Definitely Played the Zither. Everyone knows that Shirley Jackson was a witch. 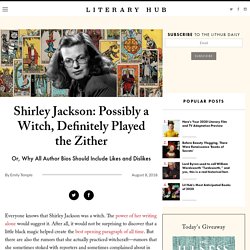 The power of her writing alone would suggest it. After all, it would not be surprising to discover that a little black magic helped create the best opening paragraph of all time. But there are also the rumors that she actually practiced witchcraft—rumors that she sometimes stoked with reporters and sometimes complained about in letters to her parents. The biographical note on her debut novel, The Road Through the Wall (1948), did not quash said rumors.

The Haunting of Shirley Jackson. 10 Facts About Shirley Jackson's Life (And Death) That Will Fascinate Fans Of The Horror Master. The Shining, Dracula, Coraline, Rosemary's Baby — everyone has their favorite horror novel, but how much do you know about the authors behind the tales of terror that keep you up all night? 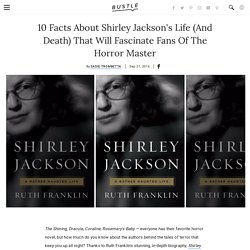 Thanks to Ruth Franklin's stunning, in-depth biography, Shirley Jackson: A Rather Haunted Life (Sept. 27), you can learn all of the things you didn't know about Shirley Jackson, the often underrated and overlooked author who may finally be getting her much deserved place in the literary canon. Best known for her shocking 1948 New Yorker story "The Lottery," a detailed and deadpan description of a small New England town who participates in an annual stoning of one of it's community members, Shirley Jackson has always been somewhat of an enigma to literary critics and readers alike. 1.

Jackson's relationship with her mother was complicated. In Search of Shirley Jackson's House. Four years ago, in July 2012, I drove from my home in Pennsylvania to the small village of North Bennington, Vermont, to research author Shirley Jackson, who was born 100 years ago this December. 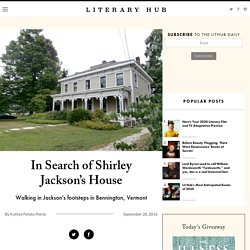 Jackson lived and wrote in North Bennington for 17 years—over half her adult life. She also died there, suddenly, upstairs in her own house, on August 8th, 1965. The cause was heart failure. She was 48. I had been to North Bennington once before, in July 1979, to attend a writing workshop at Bennington College. The haunting of Shirley Jackson: Was the gothic author's life really as bleak as her fiction? Twenty years ago, Laurence Jackson Hyman found a shabby box on his porch. 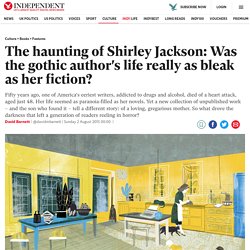 There was no sign of who had left it, nor a return address. After hours of suspicious avoidance, he decided to take a peek. Inside, he found a treasure trove of unpublished tales – by his mother. A biography reconsiders the misunderstood legacy of best-selling writer Shirley Jackson - Kate Bolick - Bookforum Magazine. Laurence Jackson Hyman on his mother Shirley: ‘Her work is so relevant now…’ Laurence Jackson Hyman wouldn’t like to say why, in her lifetime and for decades after her death, the critics failed to take very seriously the career of his mother, the novelist and short story writer Shirley Jackson. 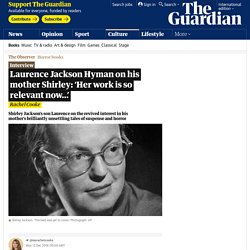 Was it all the gothic stuff that put them off – “Virginia Werewolf”, someone once called her – or her busy sideline producing funny tales about life as a housewife and mother for women’s magazines? To be honest, he doesn’t know. About the recent revival of interest in her, however, he is clear. “It’s happening for two reasons,” he says, down the line from his home in California. A User's Guide to Shirley Jackson. “Every copy of Shirley Jackson’s The Lottery has been checked out from the Springfield public library,” says news anchor Kent Brockman on an episode from the third season of The Simpsons. 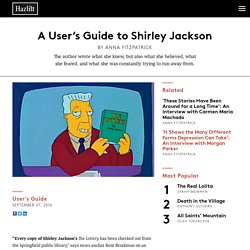 The prize is up to 130 million dollars, and people are obsessed with the prospect of winning. “Of course the book does not contain any hints on how to win the lottery. It is rather a chilling tale of conformity gone mad.” Cut to a frustrated Homer Simpson watching TV from his couch, chucking his copy of The Lottery into the fireplace. We Have Always Lived in the Castle, By Shirley Jackson. Shirley Jackson's brilliant kind of American Gothic is offered up for our consumption in this, her final novel, first published in 1962. 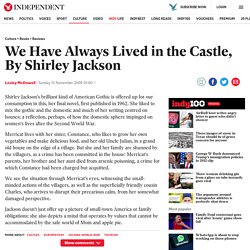 She liked to mix the gothic and the domestic and much of her writing centred on houses; a reflection, perhaps, of how the domestic sphere impinged on women's lives after the Second World War. It’s Time for a Shirley Jackson Renaissance. Shondaland / Penguin Group Seventy years ago, a short story quietly appeared in the pages of "The New Yorker," a story that would send shockwaves through the country – for its violence, for its brutality, but also for how thoroughly it critiqued the American dream. 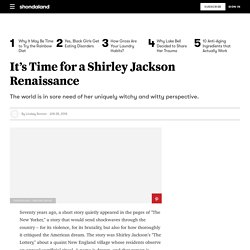 The story was Shirley Jackson’s "The Lottery," about a quaint New England village whose residents observe an annual sacrificial ritual. A name is drawn, and that person is stoned to death — in this case, the matriarch of a family — as a way of cleansing the town and flourishing local agriculture. Or so they believe. The Blog of The Antiquarian Booksellers Association of America. For those of you unfamiliar with Shirley Jackson’s work, consider yourself warned of potential SPOILERS right now and exit out of this page. 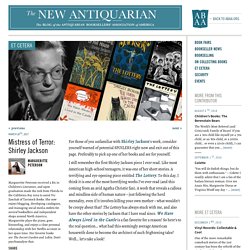 Preferably to pick up one of her books and see for yourself. I still remember the first Shirley Jackson piece I ever read. Shirley Jackson: writing her way out of the housewife box. In June 1948 a brilliantly chilling story appeared in the New Yorker. Shirley Jackson’s The Lottery is set in a small American town in which every year the villagers draw lots to determine which one of them the others will stone to death. The story attracted more letters than any other in the magazine’s illustrious history, most of them complaints from readers who were left baffled, horrified or both.

Nearly 70 years later Jackson’s story, with its disquieting details – the lottery winner’s toddler son being given his own handful of pebbles to throw has haunted me for years – and perfectly crafted final line, has lost none of its power to shock and disturb. But there were other sides to her writing, all of which are celebrated in an excellent new collection, Let Me Tell You: New Stories, Essays and Other Writing (Penguin Classics, £20), edited by her children Laurence Jackson Hyman and Sarah Hyman DeWitt.

‘Fallen woman’ In ‘The Haunting of Hill House,’ Clothes Make (and Ruin) the Women. Photograph by Deborah Turbeville for Vogue via Getty Images. Clothes Before Prose is a column that explores the use of fashion in some of our favorite novels. This week: the eerie intimacy of sharing clothing in Shirley Jackson’s The Haunting of Hill House. At the beginning of The Haunting of Hill House—the 1959 Shirley Jackson novel upon which Netflix’s 10-part series is based—Eleanor Vance takes a car (her sister’s; stolen) and sets out on a journey with the scantest possible information. She has been invited to a house, possibly haunted, by a man she doesn’t know, because she had a childhood encounter with a poltergeist.

Shirley Jackson centenary: a quiet, hidden rage. I first encountered Shirley Jackson through a single short story, “The Daemon Lover”, which I read when I was 12 without knowing any of her other work. Later, I rediscovered the story, along with the rest of Jackson’s writing, and became a fervent admirer of this brilliant and (at that time) much underrated American author. In some ways, “The Daemon Lover”, from a 1949 collection is a typical Jackson story. An unnamed woman of 34 (though only 30 on her marriage certificate) wakes up on the day of her wedding to a man called James Harris. Impatiently the woman waits for her fiance to arrive, drinking cups of coffee and obsessing over trivia – her choice of dress, the flowers, the light meal she is planning after the ceremony. Hours pass, and at last it becomes clear that the fiance is a no-show.

Editor Joyce Carol Oates on the enduring spell of Shirley Jackson. Victor LaValle: Five Books in My Life. Shirley Jackson and Me. When it comes to literary daydreaming, I’m not one for those imaginary dinner parties, with artisanally curated assemblages of Great Authors of All Time swapping deft bon mots between courses. Mostly, I’m sure, I’d end up worrying about Emily Dickinson’s food allergies and regretting having brought Nathanael West and Jacqueline Susann into the same room (hey, you choose your Great Authors, I’ll choose mine).

Carmen Maria Machado, Author of 'Her Body and Other Parties,' on Shirley Jackson and the Richness of Non-Realism. In my work, I think non-realism can be a way to insist on something different. How Shirley Jackson Makes Us Lose Our Minds. On three separate occasions, I stood within feet of people I knew intimately—one a best friend since adolescence, one a former lover, and one a member of my family—and I did not recognize them. Rosie who lives in Massachusetts suddenly appeared at a reading I was giving in California, and I thought, “Why is that girl staring at me like that?” A man I had lived with once in Brooklyn sat across from me in a coffee shop in LA, and all I could think was, “He’s strangely attractive.” A green-eyed woman in a silk scarf approached me at the Port Authority Bus Terminal and said my name, smiling.

I looked at her and thought, “My mother is at least two inches taller than that woman,” then turned and kept searching for her face in the crowd. The Great American Housewife Writer: A Shirley Jackson Primer. 11 Famous Writers on the Genius and Influence of Shirley Jackson. Memory and Delusion. Missing Mother: The Female Protagonist's Regression to the Imaginary Order. Living On the Moon: Women, Home Making, and the House after World War II.

Themes Of "We Have Always Lived On The Castle" Essay. What is camp? The Met Gala theme, explained in words and pictures — Quartzy. What do Swan Lake, Tiffany lamps, and “Broccoli” feauring Lil Yachty all have in common? Ostensibly, nothing. But a thread runs through them all: the cultural trope known as “camp.” Camp also happens to be the theme of the Metropolitan Museum of Art’s much-anticipated costume exhibition, the New York City museum announced this week. “Camp: Notes on Fashion” will be unveiled on May 6 at the annual Met Gala, an event underwritten by Gucci and led by Vogue editor-in-chief and Condé Nast artistic director Anna Wintour. THE PRIVATE WORLD OF TRUMAN CAPOTE. New Again: Truman Capote. CAPOTE: I wrote most of In Cold Blood in Switzerland. [The waiter asks for dessert orders.] CAPOTE: What’s that chocolate cake?

It looks good. WAITER: It has chocolate mousse inside. CAPOTE: I’ll have a smallish piece of that. COLACELLO: I’m always so chilly. CAPOTE: It’s because you’ve stopped drinking. WARHOL: She’s cute. CAPOTE: I don’t know. A Year with Short Novels: Breakfast at Sally Bowles’ By Truman Capote Original publication 1958 By Christopher Isherwood Original publication 1937, Currently in print as part of Berlin Stories This article is part of a series which delves into a different short novel each month, revisiting classics and considering neglected masterpieces.

To read the series introduction, “The Sweetness of Short Novels,” click here. To suggest a short novel for inclusion in the series, write to ingridnorton[at]live.com. The 'Kept Man' Who Seduced All Your Favourite Dead Gay Novelists. Christopher Isherwood's Liberation. The making of Holly Golightly.