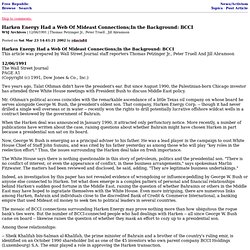 Mr. When the Harken deal was announced in January 1990, it attracted only perfunctory notice. Now, George W. The White House says there is nothing questionable in this story of petroleum, politics and the presidential son. Among those relationships: Kenneth Lay. Kenneth Lee "Ken" Lay (April 15, 1942 – July 5, 2006) was an American businessman. 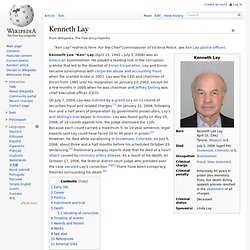 He played a leading role in the corruption scandal that led to the downfall of Enron Corporation. Lay and Enron became synonymous with corporate abuse and accounting fraud when the scandal broke in 2001. Lay was the CEO and chairman of Enron from 1985 until his resignation on January 23, 2002, except for a few months in 2000 when he was chairman and Jeffrey Skilling was chief executive officer (CEO). On July 7, 2004, Lay was indicted by a grand jury on 11 counts of securities fraud and related charges.[1] On January 31, 2006, following four and a half years of preparation by government prosecutors, Lay's and Skilling's trial began in Houston.

Lay was found guilty on May 25, 2006, of 10 counts against him; the judge dismissed the 11th. Early life[edit] Career[edit] Lay worked in the early 1970s as a federal energy regulator. Politics[edit] When Governor George W. A Blast From The Past... The Bush-Ken Lay Connection. That Lay was instrumental in Bush’s rise to the presidency is indisputable. Since 1993, Lay and top Enron executives donated nearly $2 million to Bush. Lay also personally donated $326,000 in soft money to the Republican Party in the three years prior to Bush’s presidential bid, and he was one of the Republican “pioneers” who raised $100,000 in smaller contributions for Bush. Harken Energy And Insider Trading. Arbusto Energy, wikipedia. Arbusto Energy (sometimes referred to as Arbusto Oil)[1] was a petroleum and energy company formed in Midland, Texas, in 1979, for former US President George W. 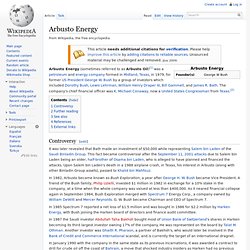 Bush by a group of investors which included Dorothy Bush, Lewis Lehrman, William Henry Draper III, Bill Gammell, and James R. Bath. The company's chief financial officer was K. Michael Conaway, now a United States Congressman from Texas.[2] Controversy[edit] It was later revealed that Bath made an investment of $50,000 while representing Salem bin Laden of the Saudi Binladin Group. In 1982, Arbusto became known as Bush Exploration, a year after George H. In 1985 Spectrum 7 reported a net loss of $1.5 million and was bought in 1986 for $2.2 million by Harken Energy, with Bush joining the Harken board of directors and finance audit committee.