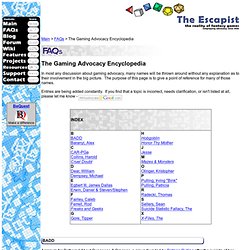 The purpose of this page is to give a point of reference for many of those names. Entries are being added constantly. If you find that a topic is incorrect, needs clarification, or isn't listed at all, please let me know - Studies About Fantasy Role-Playing Games. PERSONALITIES OF PLAYERS OF DUNGEONS AND DRAGONS. Dungeons & Dragons controversies. Army frowns on Dungeons and Dragons. IDF says players are detached from reality and automatically given a low security clearance Does the Israel Defense Forces believe incoming recruits and soldiers who play Dungeons and Dragons are unfit for elite units? 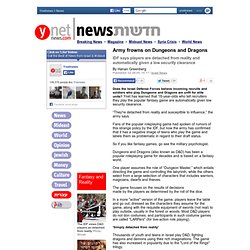 Ynet has learned that 18-year-olds who tell recruiters they play the popular fantasy game are automatically given low security clearance. “They're detached from reality and suscepitble to influence,” the army says. Fans of the popular roleplaying game had spoken of rumors of this strange policy by the IDF, but now the army has confirmed that it has a negative image of teens who play the game and labels them as problematic in regard to their draft status. So if you like fantasy games, go see the military psychologist. Paul Cardwell, Jr.: The Attacks on Role-Playing Games. James Dallas Egbert III. On April 15, 1979, at age 16, James Dallas Egbert III (October 29, 1962 – August 16, 1980) disappeared from his student dormitory room at Michigan State University. 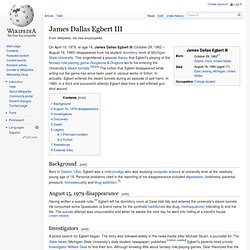 This engendered a popular theory that Egbert's playing of the fantasy role-playing game Dungeons & Dragons led to his entering the University's steam tunnels.[2][3][4] The notion that Egbert disappeared while acting out the game has since been used in various works of fiction. In actuality, Egbert entered the steam tunnels during an episode of self-harm. In 1980, in a third and successful attempt Egbert died from a self-inflicted gun shot wound. The Dungeon Master. Egbert was a 16 year old child prodigy who was battling intense academic pressure, drug addiction, and personal issues. 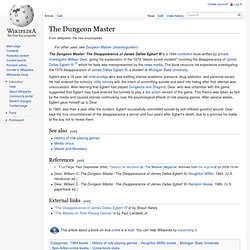 He had entered the school's utility tunnels with the intent of committing suicide and went into hiding after that attempt was unsuccessful. After learning that Egbert had played Dungeons and Dragons, Dear, who was unfamiliar with the game, suggested that Egbert may have entered the tunnels to play a live action version of the game. This theory was taken as fact by the media and caused intense controversy over the psychological effects of role playing games. After several weeks, Egbert gave himself up to Dear. In 1980, less than a year after the incident, Egbert successfully committed suicide by self-inflicted gunshot wound. See also[edit] References[edit] Dear, William C. External links[edit] Places to Go, People to Be Issue 6: The Disappearance of James Dallas Egbert III (Part I) In Brief On August 15th 1979, James Dallas Egbert III (known as Dallas Egbert) disappeared from Michigan State University in East Lansing, Michigan. 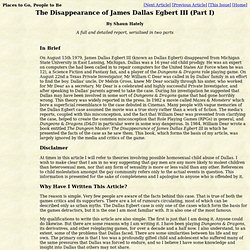 Dallas was a 16 year old child prodigy. He was an expert on computers (he had been called in to repair computers for the United States Air Force when he was 12), a Science Fiction and Fantasy fan, and a player of the Dungeons & Dragons role playing game. On August 22nd a Texas Private Investigator, Mr William C Dear was called in by Dallas' family in an effort to find the boy. Dallas' uncle, Dr Melvin Gross, knew Mr Dear socially through his sister, who worked for Mr Dear as a secretary.

Disclaimer At times in this article I will refer to theories involving possible homosexual child abuse of Dallas. Why Have I Written This Article? The reason is simple. My qualifications to write this article are also simple. The Facts In This Case. The Escapist - As BADD As It Gets. Main > Archives > As BADD As It Gets Back in 2000, I discovered the wonderful concept of buying books from used book stores on the internet, and decided right away that I needed to put together a collection of books that mentioned Dungeons & Dragons and roleplaying in a negative light. 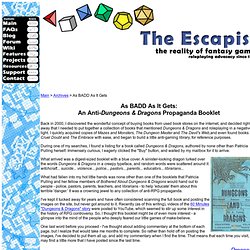 I quickly acquired copies of Mazes and Monsters, The Dungeon Master and The Devil's Web,and even found books like Cruel Doubt and The Embrace with ease, and began to build a little anti-gaming library, for reference purposes. During one of my searches, I found a listing for a book called Dungeons & Dragons, authored by none other than Patricia Pulling herself. Immensely curious, I eagerly clicked the "Buy" button, and waited by my mailbox for it to arrive. What arrived was a digest-sized booklet with a blue cover. I've kept it tucked away for years and have often considered scanning the full book and posting the images on the site, but never got around to it. 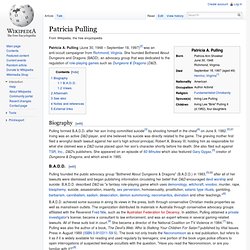 Pulling (June 30, 1948 – September 18, 1997)[2] was an anti-occult campaigner from Richmond, Virginia. She founded Bothered About Dungeons and Dragons (BADD), an advocacy group that was dedicated to the regulation of role-playing games such as Dungeons & Dragons (D&D). Biography[edit] Pulling formed B.A.D.D. after her son Irving committed suicide[3] by shooting himself in the chest[4] on June 9, 1982.[5]:21 Irving was an active D&D player, and she believed his suicide was directly related to the game. The grieving mother first filed a wrongful death lawsuit against her son's high school principal, Robert A. B.A.D.D. Michael A. Stackpole: The Pulling Report. 60 Minutes - "Dungeons & Dragons" causes kids to commit suicide & murder (1985) Mazes And Monsters (1982) Mazes and Monsters. Dungeons and Dragons Threatens Prison Security, Court Rules. The Real Truth About D&D. 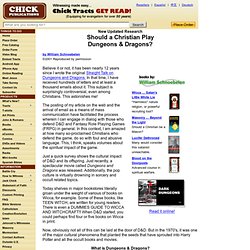 By William Schnoebelen©2001 Reproduced by permission Believe it or not, it has been nearly 12 years since I wrote the original Straight Talk on Dungeons and Dragons. In that time, I have received hundreds of letters and at least a thousand emails about it. This subject is surprisingly controversial, even among Christians. Dark Dungeons. Christians Playing Dungeons and Dragons. By Steve Weese (a Christian who plays D&D) Recently I have seen a resurgence of discussion on this topic, and since it is central to Fans for Christ, I thought I should address it. 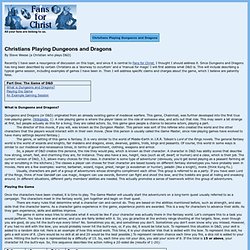 Since Dungeons and Dragons has long been described by certain Christians as a ‘doorway to occultism’ and a ‘manual for magic’ I will first address what D&D is. This will include describing a typical game session, including examples of games I have been in.