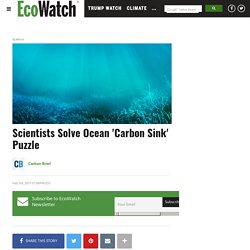 Without them, CO2 would accumulate more quickly in the atmosphere, raising temperatures more quickly. Unusually warm Arctic winter stuns scientists with record low ice extent for January. Right about now, Arctic sea ice should be building up toward its annual maximum, making most of the region impenetrable to all but the most hardened icebreakers. 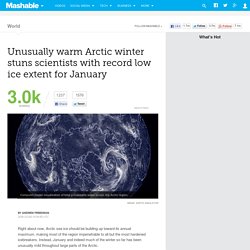 Instead, January and indeed much of the winter so far has been unusually mild throughout large parts of the Arctic. A freak storm brought temperatures to near the freezing point, or 32 degrees Fahrenheit, near the North Pole for a short time in late December and early January, and other storms have repeatedly acted like space heaters plopped on top of the globe, turning nascent sea ice to slush and eventually, to open water.

Rapid plankton growth in ocean seen as sign of carbon dioxide loading. A scanning electron microscope image of a coccolithophore, which can measure from 5 to 15 microns across, less than a fifth the width of a human hair. 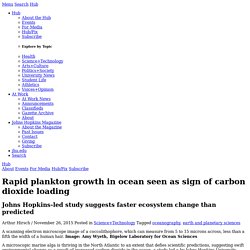 Image: Amy Wyeth, Bigelow Laboratory for Ocean Sciences A microscopic marine alga is thriving in the North Atlantic to an extent that defies scientific predictions, suggesting swift environmental change as a result of increased carbon dioxide in the ocean, a study led a by Johns Hopkins University scientist has found. What these findings mean remains to be seen, as does whether the rapid growth in the tiny plankton's population is good or bad news for the planet. Published today in the journal Science, the study details a tenfold increase in the abundance of single-cell coccolithophores between 1965 and 2010, and a particularly sharp spike since the late 1990s in the population of these pale-shelled floating phytoplankton.

The Hydropower Methane Bomb No One Wants to Talk About » Page 2 of 2. Take A Look At What Earth Would Look Like If All The Ice Melted. Climate change is a huge topic right now, especially in the alternative media field where there are multiple connecting sub-topics to consider. 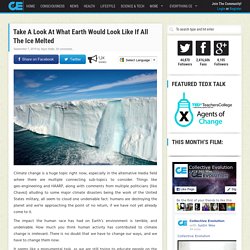 Things like geo-engineering and HAARP, along with comments from multiple politicians (like Chavez) alluding to some major climate disasters being the work of the United States military, all seem to cloud one undeniable fact: humans are destroying the planet and we’re approaching the point of no return, if we have not yet already come to it. The impact the human race has had on Earth’s environment is terrible, and undeniable. How much you think human activity has contributed to climate change is irrelevant.

There is no doubt that we have to change our ways, and we have to change them now. It seems like a monumental task, as we are still trying to educate people on the various issues that surround climate change. Energy production is the same, but multiple breakthroughs have been made for decades that show some very promising potential. Sea Level Rising Faster Than Expected, NASA Warns. New research underway indicates that at least three feet of global sea level rise is near certain, National Aeronautics and Space Administration (NASA) scientists warned Wednesday. 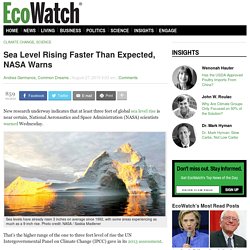 That’s the higher range of the one to three feet level of rise the UN Intergovernmental Panel on Climate Change (IPCC) gave in its 2013 assessment. Sea levels have already risen three inches on average since 1992, with some areas experiencing as much as a 9-inch rise. Carbon Dioxide Removal Schemes Can’t Cure Ocean Acidification. If necessary, it might be possible to prevent the centuries-long effects of global warming by removing carbon dioxide directly from the atmosphere. 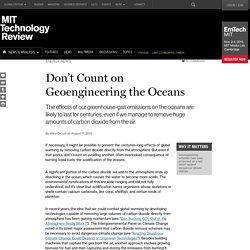 But even if that works, don’t count on avoiding another, often overlooked consequence of burning fossil fuels: the acidification of the oceans. A significant portion of the carbon dioxide we add to the atmosphere ends up dissolving in the ocean, which causes the water to become more acidic. Scientists Detect Mysterious Warming in U.S. Coastal Waters.

Surface data from sources such as the Nantucket lightship confirmed evidence of sea warming from deep-water sensors. 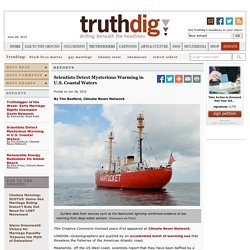 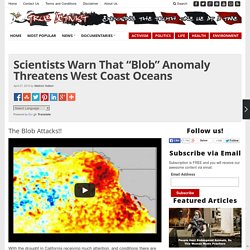 With the drought in California receiving much attention, and conditions there are only getting worse, new information may shed light as to why. According to an article released by the American Geophysical Union (AGU), a circular, 1,000 mile wide, four foot deep patch of warm water off the West Coast has scientists concerned; recently nick named “The Blob” by climate scientist Nick Bond, this patch of warm water (approximately 3.5 degrees Fahrenheit warmer) seems to be only growing in size, and wreaking havoc on local ecosystems as well as wildlife. The Siberian crater saga is more widespread — and scarier — than anyone thought. Mother Earth weeps as Arctic Circle ice cap slides into the sea.

Image credit:Jason Roberts, BBC-Cracked surface: The largest ice cap in the Eurasian Arctic - Austfonna in Svalbard - The Austfonna ice cap is located in northeastern Svalbard within the arctic circle north of Scandinavia. 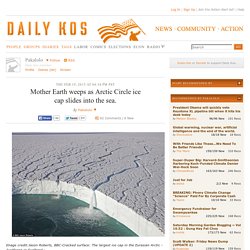 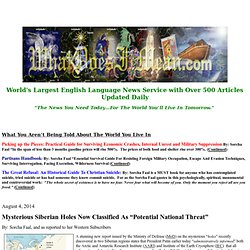 " What You Aren’t Being Told About The World You Live In Picking up the Pieces: Practical Guide for Surviving Economic Crashes, Internal Unrest and Military SuppressionBy: Sorcha Faal “In the span of less than 3 months gasoline prices will rise 500%. The prices of both food and shelter rise over 300%. (Continued) Partisans Handbook: By: Sorcha Faal “Essential Survival Guide For Resisting Foreign Military Occupation, Escape And Evasion Techniques, Surviving Interrogation, Facing Execution, Wilderness Survival (Continued) The Great Refusal: An Historical Guide To Christian Suicide: By: Sorcha Faal is a MUST book for anyone who has contemplated suicide, tried suicide or has had someone they know commit suicide. August 4, 2014 Mysterious Siberian Holes Now Classified As “Potential National Threat” August 4, 2014 © EU and US all rights reserved.

Are Siberia’s methane blow-holes the first warning sign of unstoppable climate change? Russian expedition examines a massive crater of unknown origin recently discovered on the Yamal peninsula in northern Russia. Gavino Garay reports. NSW Police discuss a fatal truck crash on the Hume Highway, which has claimed one life and injured others. A New York City doctor pushes himself on a harrowing and dangerous night-long odyssey of sexual and moral discovery after his wife admits she once almost cheated on him.

Tony Abbott has warned that it may be weeks before the bodies of MH17 victims are returned to Australia. Russian President Vladimir Putin expresses sorrow for the downed jetliner and blames the conflict in Ukraine. Tony Abbott has said it's not too late for Russia to cooperate with investigators of downed flight MH17. The Gulf Needs To Be Evacuated! “Political language is designed to make lies sound truthful and murder respectable.”George Orwell The conditions in the Gulf Coast region are so bad, that some are actually talking about a mass evacuation of the coastal regions in Louisiana. Others think the potential devastation is so dangerous that the entire Gulf Coast region should be evacuated.

State of Emergency in Siberia's Permafrost Region due to Wildfires.