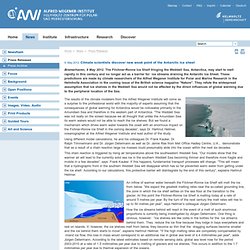 The Filchner-Ronne Ice Shelf fringing the Weddell Sea, Antarctica, may start to melt rapidly in this century and no longer act as a barrier for ice streams draining the Antarctic Ice Sheet. Greenland’s Glaciers, Science, Sea-Level, and Teachers. Climate change and the oceans. Satellite view of Arctic ice in 2008 Source: NASA/Goddard Space Flight Center Scientific Visualization Studio The oceans are a logical place to start to understand how climate change is affecting our planet. 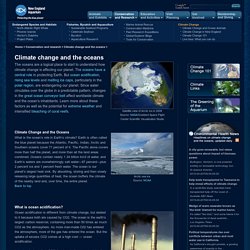 The oceans have a central role in protecting Earth. But ocean acidification, rising sea levels and melting ice caps, particularly in the polar region, are endangering our planet. Arctic sea ice Source: NOAA. Tutorial 58.3 The Ocean Conveyor Belt. What is happening in the ocean? NOAA's National Ocean Service Education: Currents: The Global Conveyor Belt. William H. Calvin, A Brain for All Seasons (University of Chicago Press, 2002), The First Panama Canal. The Fate of the Ocean. “The root cause of this crisis is a failure of both perspective and governance,” concludes the seminal Pew Oceans Commission’s 2003 report to the nation. 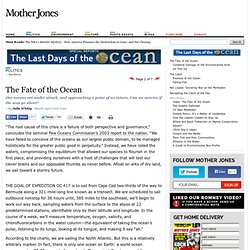 “We have failed to conceive of the oceans as our largest public domain, to be managed holistically for the greater public good in perpetuity.” Instead, we have roiled the waters, compromising the equilibrium that allowed our species to flourish in the first place, and providing ourselves with a host of challenges that will test our clever brains and our opposable thumbs as never before. Afloat on arks of dry land, we sail toward a stormy future. THE GOAL OF EXPEDITION OC 417 is to sail from Cape Cod two-thirds of the way to Bermuda along a 321-mile-long line known as a transect.

We are scheduled to sail outbound nonstop for 36 hours until, 385 miles to the southeast, we’ll begin to work our way back, sampling waters from the surface to the abyss at 22 predetermined stations, identifiable only by their latitude and longitude. MOC may have a power switch in Southern Ocean too. MOC stands for Meridional Overturning Circulation, and although it refers to the same global pattern of ocean currents (‘conveyor belt’) as the thermohaline circulation, this story shows why actually MOC is the more accurate name, as it is not just the ocean’s temperature and salt content that fuel the engine. 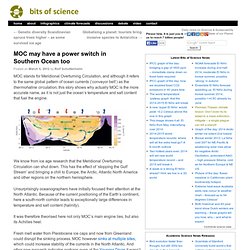 We know from ice age research that the Meridional Overturning Circulation can shut down. Oceanography. Surface currents in the open ocean can be understood primarily as the interaction of three factors: Wind tranfers energy to surface waters due to friction at the interface. 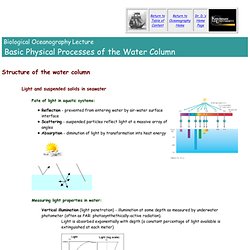 Wind is primarily the result of differential heating from absorption of sunlight between the poles and the equator. The Coriolis effect deflects moving masses to the right in the nortern hemisphere and to the left in the southern hemisphere (from the point of view of an observer on Earth). Coriolis force is an apparent force, i.e. it is only apparent to an observer on the rotating earth but not from one looking down from space. Water lecture #1- Env202b - Univ of WA - Win 2003. Thermohaline Circulation. Thermohaline Circulation Thermohaline circulation The system of surface and subsurface ocean currents that is driven by temperature and salinity differences that create density gradients between adjoining water masses. 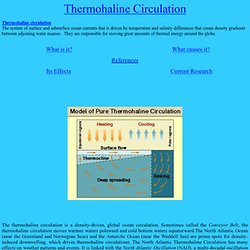 They are responsible for moving great amounts of thermal energy around the globe. What is it? What causes it? References Its Effects Current Research. Information for Teachers. The water molecule is composed of hydrogen and oxygen, in a ratio of two volumes of hydrogen for each volume of oxygen, with the molecular formula H2O and a molecular diameter of about 2.75 angstrom. 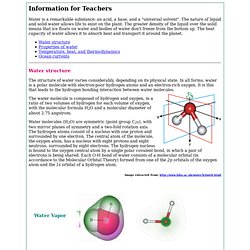 Water molecules (H2O) are symmetric (point group C2V), with two mirror planes of symmetry and a two-fold rotation axis. The hydrogen atoms consist of a nucleus with one proton and surrounded by one electron. The central atom of the molecule, the oxygen atom, has a nucleus with eight protons and eight neutrons, surrounded by eight electrons. The hydrogen nucleus is bound to the oxygen central atom by a single polar covalent bond, in which a pair of electrons is being shared. 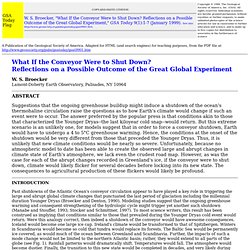 Reflections on a Possible Outcome of the Great Global ExperimentW. S. Broecker Lamont-Doherty Earth Observatory, Palisades, NY 10964ABSTRACT Suggestions that the ongoing greenhouse buildup might induce a shutdown of the ocean's thermohaline circulation raise the questions as to how Earth's climate would change if such an event were to occur. The answer preferred by the popular press is that conditions akin to those that characterized the Younger Dryas--the last kiloyear cold snap--would return. But this extreme scenario is an unlikely one, for models suggest that in order to force a conveyor shutdown, Earth would have to undergo a 4 to 5°C greenhouse warming. Figure 2. Figure 3.

The first dust episode, Younger Dryas conditions locked in. Triggering Abrupt Climate Change. Over the past two decades, we have heard about greenhouse gases and the idea that our planet is gradually warming. 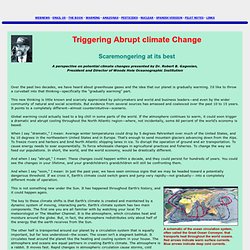 I'd like to throw a curveball into that thinking—specifically the "gradually warming" part. This new thinking is little known and scarcely appreciated by policymakers and world and business leaders—and even by the wider community of natural and social scientists. But evidence from several sources has amassed and coalesced over the past 10 to 15 years. 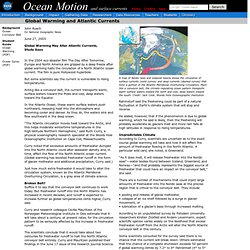 Manoa.hawaii.edu/ExploringOurFluidEarth. SF Fig. 2.9. The Heat Is Online. The Boston Globe, Oct. 1, 2002 WOODS HOLE - In what would be a surprising byproduct of global warming, average temperatures in North America and Europe could drop by 5 to 10 degrees Fahrenheit in the coming decades as melting polar ice and increased water evaporation profoundly alter the ocean currents that keep both regions warm, say researchers at the Woods Hole Oceanographic Institution.

Terrance Joyce, chairman of the Woods Hole Department of Physical Oceanography, said he believes that key parts of the Gulf Stream ocean current system could virtually shut down, perhaps in our lifetime, reducing or cutting off the flow of warmer water from the equator to the North Atlantic. If these key features, called thermohaline pumps, shut down, it would signficantly cool northern latitudes, including New England. The big-chill theory is controversial, and viewed as unlikely by some top climate forecasters. Even the skeptics, however, say something unusual is happening to ocean currents. Melting Arctic Sea Ice and the Global Ocean Conveyor. Thermohaline circulation, also called the Global Ocean Conveyor, moves water between the deep and surface ocean worldwide. Image courtesy Argonne National Laboratory Seawater moves through the Atlantic as part of the Global Ocean Conveyor, the regular pattern by which seawater travels the world’s oceans.

Listen to this story via streaming audio, a downloadable file, or get help. March 5, 2004: Global warming could plunge North America and Western Europe into a deep freeze, possibly within only a few decades. That's the paradoxical scenario gaining credibility among many climate scientists. Climate Timeline Tool: What is Variability? How to Read the Figure: Variability or variance refers to the range of values between a particular maximum and minimum over time. Paleoclimate: Climate Change through Time. Compiled by Monica Bruckner at SERC. This section provides access to a spectrum of visualizations and supporting material that can be used effectively to teach students about paleoclimate through geologic time.