Oceans. Why the Ocean? Why Sharks Matter. Reduce Carbon, Save Species. Statistics - ITOPF. Ocean Acidification: The Basics. Animation created by Sarah Cooley, Woods Hole Oceanographic Institution, showing a computer recreation of surface ocean pH from 1895 to the present and a forecast of ocean pH between now and 2100 under current emission rates. 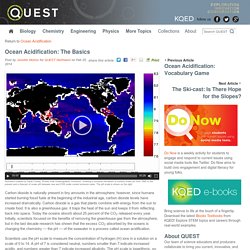 The pH scale is shown on the right. Carbon dioxide is naturally present in tiny amounts in the atmosphere; however, since humans started burning fossil fuels at the beginning of the industrial age, carbon dioxide levels have increased dramatically. Carbon dioxide is a gas that plants combine with energy from the sun to create food. It is also a greenhouse gas: it traps the heat of the sun and keeps it from reflecting back into space. Today the oceans absorb about 25 percent of the CO2 released every year. Scientists use the pH scale to measure the concentration of hydrogen (H) ions in a solution on a scale of 0 to 14. Ocean acidification takes place when excess CO2 from the atmosphere dissolves in the ocean and combines with seawater to form carbonic acid.

Altered Oceans, Part Two. Protecting the Ocean. World’s Largest Single Marine Reserve Created in Pacific The area around the Pitcairn Islands is one of the most pristine places on Earth. 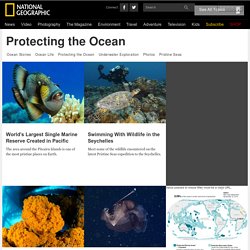 Swimming With Wildlife in the Seychelles Meet some of the wildlife enountered on the latest Pristine Seas expedition to the Seychelles. Value passed to resize filter must be a valid URL. Gabon Unveils Huge Marine Reserve The protected area will cover 18,000 square miles of ocean—home to great hammerhead sharks, manta rays, whale sharks, and tiger sharks. Watch: Rare Sea Devil Fish Caught Made famous in the movie Finding Nemo, a sea devil is caught on film for the first time. Mapping the World's (Few) Protected Seas Gabon and the U.S. have new marine reserves, but just a fraction of the seas are protected. The Antarctic's New Way to Melt Ice shelves lose more mass through melting where the ice meets the sea than by shedding icebergs, a new study says.

Get Involved — Ocean Education Publishing. Protecting Sustainable Resources. Startling Images of the Tons of Trash in the World's Oceans. <br/><a href=" ABC US news</a> | <a href=" World News</a> Copy Nearly 270,000 tons of plastic are floating in the world's oceans, according to a new study. 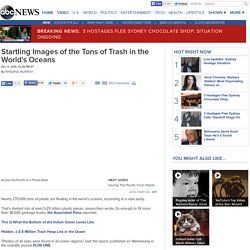 That's divided into at least 5.25 trillion plastic pieces, researchers wrote. Or, enough to fill more than 38,500 garbage trucks, the Associated Press reported. "Plastics of all sizes were found in all ocean regions," said the report, published on Wednesday in the scientific journal PLOS ONE. AFP/Getty Images PHOTO: Plastic bags and other rubbish are collected from the waters and shoreline of Manila Bay during a campaign by environmental activists and volunteers calling for a ban of the use of plastic bags, July 3, 2014 UIG via Getty Images PHOTO: Juvenile Herring Gull with plastic rubbish in its beak, Newquay, Cornwall, England.

Researchers only measured plastic floating at the surface of the oceans, and not at the ocean floor, and the study doesn't take into consideration any of the other trash polluting the seas.