How To Install Linux, Nginx, MySQL, PHP (LEMP stack) in Ubuntu 16.04. You searched for easyengine - Odin SQL. How To Install WordPress with Nginx on Ubuntu 14.04. Introduction WordPress is the most popular CMS (content management system) in the world. 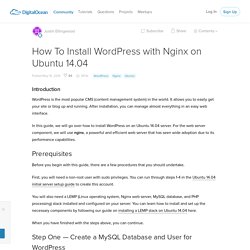 It allows you to easily get your site or blog up and running. After installation, you can manage almost everything in an easy web interface. EasyEngine: lickety-split installation of WordPress on a LEMP stack, with selective SSL. So after I spent quite a large amount of time writing my last post, I was contacted in the comments by an enterprising marketing executive from rtCamp, recommending their free EasyEngine product, which quickly installs LEMP and WordPress sites with minimal user interaction. 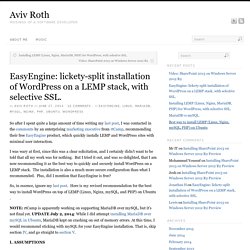 I was wary at first, since this was a clear solicitation, and I certainly didn’t want to be told that all my work was for nothing. But I tried it out, and was so delighted, that I am now recommending it as the best way to quickly and securely install WordPress on a LEMP stack. The installation is also a much more secure configuration than what I recommended. Plus, did I mention that EasyEngine is free? So, in essence, ignore my last post. NOTE: rtCamp is apparently working on supporting MariaDB over mySQL, but it’s not final yet. This post, like my previous post assumes that you already have the following in place, and I will not cover them: All you have to do is type the following at the command line: Poof! Poof! Installing Fresh WordPress on Nginx Server (Minimal Configuration)

Easyengine (ee) note: If you are using easyengine, you can accomplish everything in this article using following commands: ee system install nginx ee site create example.com --wp If this is your first Nginx setup, most likely you are moving from Apache to a WordPress-Nginx setup. 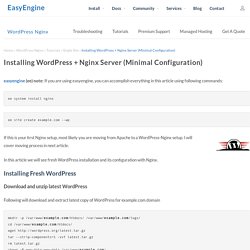 Initial Server Setup with Ubuntu 14.04. Introduction When you first create a new Ubuntu 14.04 server, there are a few configuration steps that you should take early on as part of the basic setup. 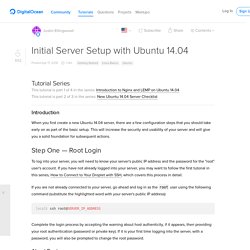 This will increase the security and usability of your server and will give you a solid foundation for subsequent actions. Step One — Root Login To log into your server, you will need to know your server's public IP address and the password for the "root" user's account. If you have not already logged into your server, you may want to follow the first tutorial in this series, How to Connect to Your Droplet with SSH, which covers this process in detail. If you are not already connected to your server, go ahead and log in as the root user using the following command (substitute the highlighted word with your server's public IP address): ssh root@SERVER_IP_ADDRESS Complete the login process by accepting the warning about host authenticity, if it appears, then providing your root authentication (password or private key). About Root adduser demo. Install - EasyEngine. Supported distributions Ubuntu 12.04, 14.04 and 16.04Debian 7 and 8 Port requirements. 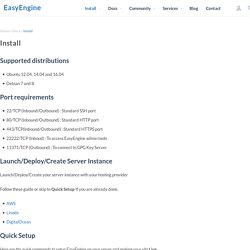 How To Install Linux, nginx, MySQL, PHP (LEMP) stack on Ubuntu 14.04. Introduction The LEMP software stack is a group of software that can be used to serve dynamic web pages and web applications. 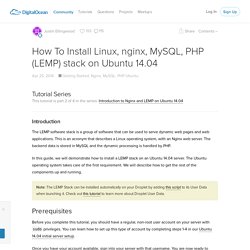 This is an acronym that describes a Linux operating system, with an Nginx web server. The backend data is stored in MySQL and the dynamic processing is handled by PHP. In this guide, we will demonstrate how to install a LEMP stack on an Ubuntu 14.04 server. The Ubuntu operating system takes care of the first requirement. Note: The LEMP Stack can be installed automatically on your Droplet by adding this script to its User Data when launching it. Prerequisites. How To Set Up Nginx Server Blocks (Virtual Hosts) on Ubuntu 14.04 LTS. Migrate Wordpress from localhost to virtual host on DigitalOcean. Joeguilmette/ee-vvv-wordmove: A guide for l... - GitHub.

Development Environments Made Easy with Vagrant and DigitalOcean. March 15, 2013 · 16 Comments Developing is now easier than before with the new DigitalOcean provider driver in Vagrant 1.1. 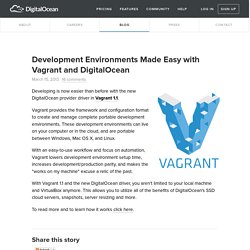 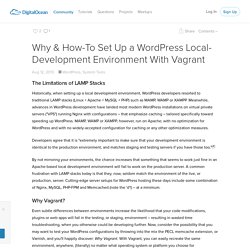 Meanwhile, advances in WordPress development have landed most modern WordPress installations on virtual private servers ("VPS") running Nginx with configurations – that emphasize caching – tailored specifically toward speeding up WordPress. MAMP, WAMP or XAMPP, however, run on Apache; with no optimization for WordPress and with no widely-accepted configuration for caching or any other optimization measures.

Developers agree that it is "extremely important to make sure that your development environment is identical to the production environment, and matches staging and testing servers if you have those too. "[#] Why Vagrant? How To Connect To Your Droplet with SSH. Introduction If you have recently created a DigitalOcean Droplet, and you are new to working with Linux servers, you will need to learn how to use SSH to connect to and manage it. 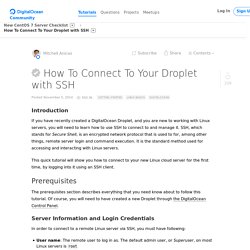 SSH, which stands for Secure Shell, is an encrypted network protocol that is used to for, among other things, remote server login and command execution. It is the standard method used for accessing and interacting with Linux servers. This quick tutorial will show you how to connect to your new Linux cloud server for the first time, by logging into it using an SSH client. Prerequisites The prerequisites section describes everything that you need know about to follow this tutorial. Server Information and Login Credentials In order to connect to a remote Linux server via SSH, you must have following: User name: The remote user to log in as.

SSH Client Software There are a variety of SSH clients that you can use to connect to a Linux server. SSH Login as Root Option 1: OpenSSH (Linux and Mac OS X) Step 2 — Authenticate.