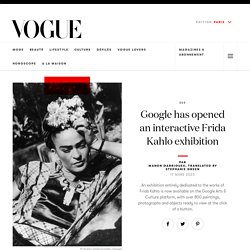 And for those who were not lucky enough to discover this exhibition, Frida Kahlo's work is now accessible from your iPhone. How, you might ask? By connecting to the Google Arts & Culture platform, which has listed more than 800 paintings, photographs and objects belonging to the artist, which users can examine in the finest detail thanks to an ultra-precise magnifying glass system. Kenyan Eyes - Art can save the planet. If art is made of shadow. 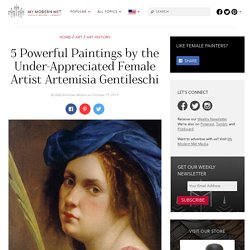 The success of Impressionism, for example, is often credited to Claude Monet, while Salvador Dalí is frequently seen as the sole architect of Surrealism. In addition to overly simplifying the complexity of these genres, however, this system of attribution is flawed, as female artists are rarely included in the running. A prime example of an overshadowed female painter is Artemisia Gentileschi. What makes a perfect portrait? - BBC Reel. Essential Oil Painting Techniques You Need to Know. 13 Fundamental Art Movements for Understanding Modern Visual Arts. 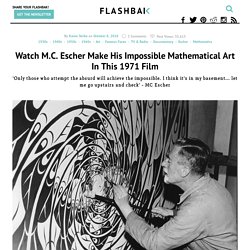 Through repetition, geometry, perspective, reflection. symmetry, tessellation. light and shade, Escher sucked us into his pictures that challenge our brain’s assumptions and perceptions. Unlike surrealists, for home the other worldly is obvious at first glance, Escher’s images become puzzling after closer examination. Stephen Ellcock - Jean-Michel Basquiat, Untitled, Wax... 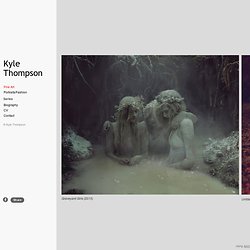 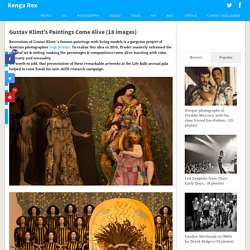 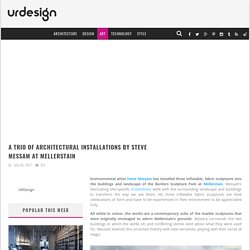 Messam’s fascinating site-specific installations work with the surrounding landscape and buildings to transform the way we see them. His three inflatable fabric sculptures are bold celebrations of form and have to be experienced in their environment to be appreciated fully. All white in colour, the works are a contemporary echo of the marble sculptures that were originally envisaged to adorn Mellerstain’s grounds. Mystery surrounds the two buildings in which the works sit, and conflicting stories exist about what they were used for. Messam extends this uncertain history with new narratives, playing with their sense of magic. Pointed sits within the former gatehouse and Pekingese stud and fills the void inside the building, extending out from the long absent pitched roof that the inflatable form itself mimics. The World Where Everything's an Iceberg: 90% Is Under the Surface. 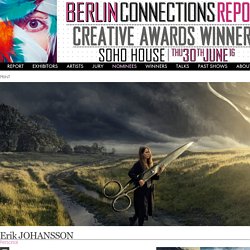 ERIK JOHANSSON. Cookies are Not Accepted - New York Times. Artist 'domesticates' plant roots into intricate geometric forms. Our perception of plants probably paints them as passive, slow-growing green things that aren't particularly intelligent -- at least, not like us humans. 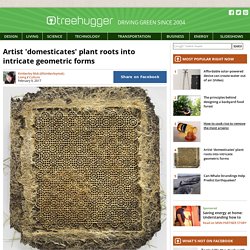 But recent research is showing how arrogantly anthrocentric that view may be, revealing that plants do indeed sense, learn, remember and react much like how a human might. Scientists aren't the only ones having fun with this new research into what is now informally being called plant neurobiology (though this is a bit of a misnomer, as plants do not have neurons per se). In a series of grown artworks called Interwoven, Amsterdam-based German artist Diana Scherer explores how the sensitive roots of plants -- sometimes likened to the 'brains' of a plant -- can be molded and shaped into intricate, man-made forms. 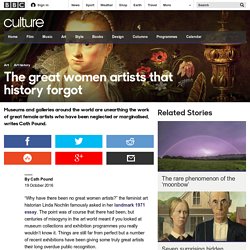 The feminist art historian Linda Nochlin famously asked in her landmark 1971 essay. Land Art. Germany based artist Walter Mason has an affinity for pulling things apart and then putting them back in to place – but in a subtly changed way. 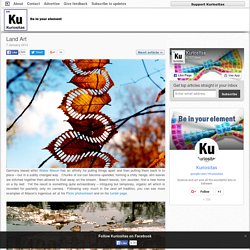 Chunks of ice can become upended, forming a chilly henge, elm leaves are stitched together then allowed to float away on the stream. Beech leaves, torn asunder, find a new home on a lily leaf. Yet the result is something quite extraordinary – intriguing but temporary, organic art which is recorded for posterity only on camera. Anselm Kiefer: Remembering the Future. Rainworks - Rain-Activated Art. I Turn Paper Into Wedding Dresses Based On Different Nationalities. I am an artist and my material is an ordinary paper. Once I was approached by a brand of underwear in order to make image-shooting for wedding clothes. Wedding suit should hide the bride from the groom in almost all the cultures. In some countries it closes not only the body but also the face completely. On the stage of sketches for shooting, it was hard to imagine stylized national costume, which would expose intimate parts.

But the final result was so conventional that it did not seem vulgar and unaesthetic in combination with underwear. The main thing for me was not to offend the sensibilities of culture bearers, whose costume I took as a basis. How to Achieve Flawless Beauty. Personal -  S a n t i a g o   C A R U S O   -   Artist &  Illustrator. Jheronimus Bosch - the Garden of Earthly Delights. Cookies op de website van de NTR.

Art Nouveau. Art & Science. Art & Technology. Body Art. Creatures. Just Different. Political Art. Sculpture. Art. Declaration of the Independence of the Mind: An Extraordinary 1919 Manifesto Signed by Albert Einstein, Bertrand Russell, Jane Addams, and Other Luminaries. Decades before Martin Luther King, Jr. made his timeless case for the ancient Greek notion of agape as a centerpiece of nonviolence, another luminous mind and soaring spirit challenged humanity to pause amid one of the most violent periods in history and consider an alternative path. The declaration was published in the socialist newspaper L’Humanité on June 26, 1919, and was later included in the out-of-print treasure Hermann Hesse & Romain Rolland: Correspondence, Diary Entries and Reflections (public library) — Rolland enclosed the text in an April 1919 letter to Hesse, asking the beloved German writer to be among the signatories.

Underwater Museum: A Tribute to the Ocean. I Thought These People Were Weird. Then A Closer Look Left Me Absolutely Speechless. If someone were to tell me that the people in these pictures weren’t real, I’d laugh in their face. The truth of it is, though, they’re not. They are creations of a London artist named Ron Mueck, who specializes in sculptures. 10 Artists Who Shatter Our Perceptions Of Reality. 11-Year-Old Child Prodigy Creates Stunningly Detailed Drawings Bursting With Life. Credit: Bored Pand Serbian artist Dušan Krtolica just might be the next big child prodigy. This 11-year-old is a master artist, drawing a wide array of anatomically correct flora and fauna with a level of mastery that is far beyond his years.

Krtolica has been drawing since he was two years old and obviously hasn’t looked back since. By the time he was eight years old Krtolica had already had two national solo exhibitions – something that many perfectly capable adult artists cannot claim. The young prodigy clearly has a strong fascination, as the majority of his beautiful drawings are saturated with countless different species of every plant and animal under the sun. Given his fascination with the natural world, it makes sense that Krtolica wants to be a zoologist when he grows up. Mecre - Mechanical Creatures. Adam Martinakis. Artist Wants To Map Every Single Human Skin Tone On Earth. Perhaps, in the near future, besides wearing mobile devices on our faces and sporting unisex high-waisted pants, we’ll cease to refer to people as black or white, or some variant in between. Instead, we’ll use their corresponding Pantone color to describe the tone of their skin. If this happens, we’ll have to thank artist Angelica Dass for building the first database of skin hues.

Dass started her project, Humanae, in April 2012, by photographing some of her Brazilian family members. Dass sampled a small pixel from the subject’s skin--usually from the well-lit cheek area--and then matched it to a Pantone hue, which is used as the backdrop. An Incredible Fantasy World Mapped With Google Street View. What Happens When You Zap Instant Film With 15,000 Volts. Phillip Stearns is an artist who sees beauty where others see computer bugs. Art as Therapy: Alain de Botton on the 7 Psychological Functions of Art. D'ART - The Internet Art Database. Gabriel pacheco. Online Portfolios on Behance.

JR:Photographer showcases his 'Wrinkles of the City' project in Berlin. Incredible paintings of sci-fi suburbia will make you wish you were Swedish. Astonishingly Photo-Realistic Surreal Paintings by Jeremy Geddes. Art. Contextually it’s pivotal, an artistic exploration of the metaphysical, developed in the digital; all rhymes aside, Los Angeles based artist Anthony Gargasz,’s new collection ‘Metallic Faces’ simply cannot be ignored for these three reasons.

Fifteen years ago there was no such thing as ‘Photoshop art’. A Janitor Secretly Worked On This For 7 Years. No One Knew Til Now... And It's Baffling Everyone. Over 30 years ago, a man spent 7 years hand-drawing the most complex, unbelievable and probably unsolvable maze I’ve ever seen. His daughter recently posted the following photos on Twitter and, needless to say, the entire Internet is exploding with questions about her dad. Particularly because… he’s a university janitor. Yes, janitor. Korean Artist Transforms Her Small Studio Into Dreamlike Worlds Without Photoshop. Ferocious Life-Sized Beasts Drawn By Fiona Tang Leap Off The Paper At You. At First I Thought These Were Regular Paintings. Then I Kept Looking And...Holy Cow! These 29 Clever Drawings Will Make You Question Everything Wrong With The World. This Artist Takes These Silly Doodles And Makes Them...Awesome. Insane Thought-Provoking Illustrations You've Never Seen. Space Alien Skull (QHO-2011B026712)