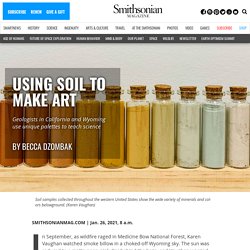 Finding the faces from the past… – Art & Science By O D Nilsson. Impossible Cityscapes by Benjamin Sack Draw Inspiration From Cartography and Musical Compositions. The resonances between Indigenous art and images captured by microscopes. Rich visual parallels between Indigenous artworks and microscopic natural structures hidden in the world around us reveal unexpected and intriguing similarities that can deepen our respect for our country and its stories. 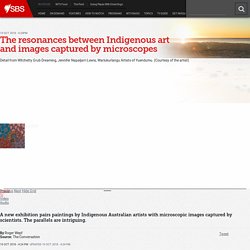 A new touring exhibition in Sydney, bringing microscopy and Indigenous art together, explores these images, which pass on knowledge and shape our understanding of the world. Art and science.

Art and Biology Meet at Nonhuman Networks Exhibition in Berlin. Cell. Five questions with scientist-artist Deb Gumucio. It may not look like it, but the University of Michigan Center for Organogenesis, with its dissecting and transmission electron microscopes, doubles as an art studio. 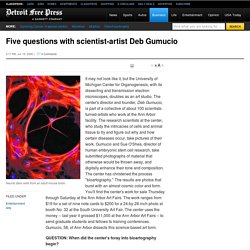 The center's director and founder, Deb Gumucio, is part of a collective of about 100 scientists-turned-artists who work at the Ann Arbor facility. The research scientists at the center, who study the intricacies of cells and animal tissue to try and figure out why and how certain diseases occur, take pictures of their work. Gumucio and Sue O'Shea, director of human embryonic stem cell research, take submitted photographs of material that otherwise would be thrown away, and digitally enhance their tone and composition.

The center has christened the process "bioartography. " The results are photos that burst with an almost cosmic color and form. Is this the first microscopic landscape painting? A few years ago I read Kenneth Clark’s book Landscape into Art, written in 1949 but which is still an excellent introduction to the history of landscape painting. 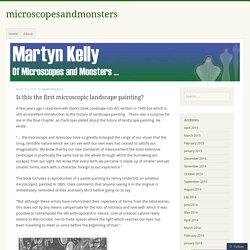 There was a surprise for me in the final chapter, as Clark speculated about the future of landscape painting. He wrote: “… the microscope and telescope have so greatly enlarged the range of our vision that the snug, sensible nature which we can see with our own eyes has ceased to satisfy our imaginations. We know that by our new standards of measurement the most extensive landscape is practically the same size as the whole through which the burrowing ant escapes from our sight. We know that every form we perceive is made up of smaller and yet smaller forms, each with a character foreign to our experience.” Benoit Mandelbrot Fractal Art Contest 2009 ~~ Entry: Cells Alive. Arts/Sciences#11: Evelina Domnitch & Dmitry Gelfand. Gallery: Karen Kamenetzky Fiber Art.

Untitled. Laura Splan - Doilies. Drew Berry: DNA dances as imagination goes viral at White Night. Could not load plugins: File not found White Night 'virus' to infect State Library The State Library of Victoria is set to display a giant, 360 degree projection of animated human viruses as part of White Night. 14, 2014 Making something a billion times bigger - it sounds like a figure of speech or a wild exaggeration. 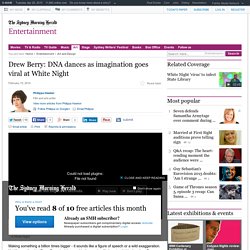 Yet it's exactly what Drew Berry is doing, and in the most unlikely, yet suitable, location. Home of David S. Goodsell. I recently completed a series of paintings showing the life cycle of HIV, as part of the book "The Future of HIV-1 Therapeutics: Resistance is Futile? 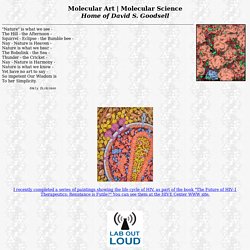 " You can see them at the HIVE Center WWW site. I got to talk a bit about my paintings with Brian Bartel and Dale Basler in an interview for "Lab Out Loud," a podcast presented by the National Science Teachers Association. Dan Klionsky directed a creative collaboration to explore the process of autophagy, which brought together choreographer and videographer Peter Sparling, composer Wendy Lee, and myself. Janelia Research Campus. Psychedelic plants: The inner beauty of common species - Image 2. 12:29 03 November 2014 If you think "garlic" and "beauty" don’t belong in the same sentence, take a closer look at a magnified view of a tiny slice of the plant’s stem, captured by Rob Kesseler from the University of the Arts London (see below). 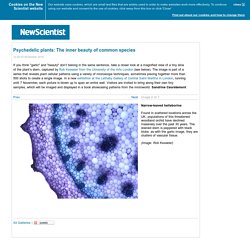 The image is part of a series that reveals plant cellular patterns using a variety of microscope techniques, sometimes piecing together more than 500 shots to create a single image. In a new exhibition at the Lethaby Gallery of Central Saint Martins in London, running until 7 November, each picture is blown up to span an entire wall. 10 Award-Winning Microscope Images That Turn Science Into Art. Some of the most vibrant, beautiful photographs taken this year weren’t captured with a camera, but with a microscope. 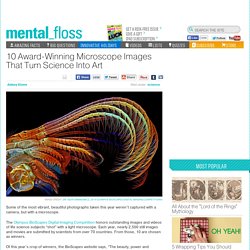 The Olympus BioScapes Digital Imaging Competition honors outstanding images and videos of life science subjects “shot” with a light microscope. Each year, nearly 2,500 still images and movies are submitted by scientists from over 70 countries. From those, 10 are chosen as winners. Of this year’s crop of winners, the BioScapes website says, “The beauty, power and importance of science as portrayed by these incredible images and movies captivated this year’s panel of judges and is delighting viewers worldwide.” Hypnotic Art Shows How Patterns Emerge From Randomness in Nature. British mathematician Alan Turing is perhaps best known for the Turing test, which determines if a computer can be considered intelligent based on whether it can pass for a human in conversation. 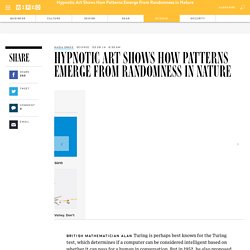 But in 1952, he also proposed an explanation for how naturally occurring patterns — things like the spots and stripes on animal fur — could arise from a random slate of cells. At the time, scientists were struggling to understand how large-scale organization and patterns emerged during development. Photos: Scientists use microbes to make beautiful works of art in petri dishes — Quartz.

In 2012, China wrested control of Scarborough Shoal in the South China Sea from the Philippines. 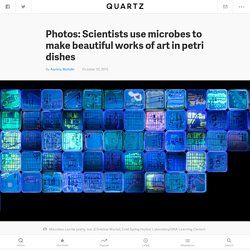 With the shoal—reefs, rocks, and a vast lagoon—located just 220 km (137 miles) from the Philippines’ main island Luzon, the incident heightened tensions and embarrassed Manila, which the following year opened a case in an international tribunal challenging Beijing’s territorial moves in the sea. So alarm bells went off earlier this month when Chinese ships gathered at Sandy Cay, a set of sandbars close to Philippines-occupied Thitu Island in the sea’s Spratly archipelago. The island has a small civilian population and a decrepit runway the Philippines has been meaning to repair. The flotilla was seen as intimidating at the very least. “China’s ongoing maritime activity around Thitu is worrisome… if the objective of the operation is to occupy Sandy Cay, that would mean a significant escalation in tension in the South China Sea. But not everyone in the Philippines is so sure. Mind maps: the beauty of brain cells – in pictures.

In fact, his work has just been selected as part of the solaé art gallery project, an initiative to bring art into the offices of Tokyo Electron, one of Japan’s largest semiconductor companies. It’s no surprise that these incredibly detailed renderings are made from an incredibly scientific process. The 29-year old Murayama begins by collecting and studying different flowers. Stunning, psychedelic images where art and science collide. In his TEDGlobal 2013 talk, Fabian Oefner shares breathtaking images at the nexus of art and science, which beautifully capture unique moments of physical and chemical drama. Formally trained in art and design, Oefner says that he has always been interested in science.

Though he can’t pinpoint the exact moment when he became interested in pairing his two loves, he views both pursuits as inextricably linked by a crucial bond: “The most important quality of science or art is curiosity,” Oefner tells TED. “That’s what keeps me going and always finding something new.” On the TED stage, Oefner demonstrates the science at work behind three of his photographs. Albert Einstein's Unique Approach to Thinking. “I never came upon any of my discoveries through the process of rational thinking.” — Albert Einstein In the arena of scientific achievement and the quest to discover genius, Albert Einstein stands alone. He remains a profoundly important figure who undertook extraordinary, groundbreaking work that not only shaped the pillars of modern physics but greatly influenced the philosophy of science.

Quite literally, Einstein changed the way we see and travel across the world and cosmos. He was responsible for the world’s most famous equation and for discovering the theory of relativity, considered to be mankind’s highest intellectual discovery. Einstein went about his work in unique ways. Yasmin List: [Yasmin_discussions] STEM to STEAM: knowledge, inconsistencies and risks.

Dear Yasminers, and all involved in the discussion, Thanks for launching and contribute to this discussion. I'll skip the infoabout me, for Roger was so kind to forward my previous email which includedlinks etc. Art makes science come ALIVE in York gallery show. SCIENCE meets arts this week in a brand new free exhibition on show at York Art Gallery.

Art work inspired by ground-breaking medical and scientific research makes up an exhibition, which opened yesterday. ALIVE: Between Art and Science has work by six globally- recognised artists, who have worked with University of York researchers and scientists come up with the new pieces. Laura Turner, senior curator at York Art Gallery, said: “Each artist was invited to the University based on their existing portfolio of work. Teach science with art? This astronomer says yes. Aomawa Shields is a scientist, actor and TED Fellow. Through her organization Rising Stargirls, she teaches astronomy to middle school girls using theater, writing and visual arts. Schopenhauer on the Essential Difference Between How Art and Science Reveal the World. Rising Strong: Brené Brown on the Physics of Vulnerability and What Resilient People Have in Common.

“There is no science without fancy, and no art without facts,” Vladimir Nabokov famously proclaimed. The Paradox of Intellectual Promiscuity: Stephen Jay Gould on What Nabokov’s Butterfly Studies Reveal About the Unity of Creativity. The history of human culture is rife with creators hailed as geniuses in one domain who also had a notable but lesser-known talent in another — take, for instance, Richard Feynman’s sketches, J.R.R. Tolkien’s illustrations, Sylvia Plath’s drawings, William Faulkner’s Jazz Age illustrations, Flannery O’Connor’s cartoons, David Lynch’s conceptual art, and Zelda Fitzgerald’s watercolors.

The Dense Microcosmic Worlds of Painter Robert S. Connett. Since he was a child, Robert S. Connett was fascinated by nature. Art and Neuroscience: a State of the Union. Harvard’s Biovions vs. Sandra Bullock’s Gravity: Should We Use Art to Teach Science? If you haven’t seen the mesmerizing video, “The Inner Life of the Cell” produced by Harvard University in 2007, take a moment to watch it below. Art, Science and the Sublime: 3 questions with Anna Dumitriu » IAI TV. Hz #17 -"FEELTRACE and the Emotions (after Charles Darwin)" Imac 2011 Proceedings. PLUTCHIK IN PROCION. SciArt in America - SAiA December 2013. Artists 'have structurally different brains'