This Woman Creates Beautiful Memorials For Dead Animals She Comes Across And Here Are 25 Of The Most Heartbreaking Ones. Isaac Cordal - Cement Eclipses - Urban Art. The Soup Nazi* The surprisingly soothe sounds of San Francisco's fog horns and surf (1987) This 1987 field recording of the San Francisco Bay's surf meshed with the sound of four separate foghorns surprised me. 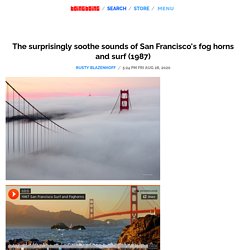 I found it to be more calming than alarming. In the late '80s, my dad recorded the foghorns of San Francisco on tape for my mother. Many of the foghorns in San Francisco Bay can never be heard again as they have been replaced by more advanced technology…Here is what my dad has to say:This recording was made late in the evening on the foggy night of August 29th, 1987 from Lands End near Lincoln Park in San Francisco, using fairly inexpensive stereo equipment. The coordinates are approximately N 37 degrees 47' 14"; W 122 degrees 29' 40.5". Years later I converted the recording to digital for posterity. If you live in San Francisco, here's something to try next time there's fog, from the Golden Gate Bridge website:

How the Three Color Rule Works in Filmmaking. Stop Everything, Live Vicariously in Sweden's Miniature Mouse World. Dorothy Iannone - Air de Paris. Photos: The Works of Christo. Yesterday, May 31, the artist Christo Vladimirov Javacheff, better known as Christo, passed away in his home in New York City at the age of 84. 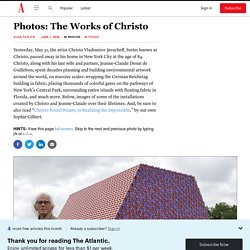 Christo, along with his late wife and partner, Jeanne-Claude Denat de Guillebon, spent decades planning and building environmental artwork around the world, on massive scales: wrapping the German Reichstag building in fabric, placing thousands of colorful gates on the pathways of New York’s Central Park, surrounding entire islands with floating fabric in Florida, and much more. Red Paint Completely Changed This ‘Serve and Protect’ Sculpture During the Protests. During the large-scale protests this past weekend in Salt Lake City, Utah, a public artwork had its symbolic meaning completely transformed when demonstrators poured red paint onto the giant hands. 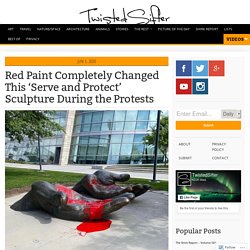 “Serve and Protect” is a large bronze sculpture by artist Gregory Ragland depicting two hands side-by-side with their palms facing upward, demonstrating the sign language, ‘to serve’. The public art commission was completed in 2013 and measures 20′ x 20′ x 38″ and is located outside of the Public Safety Building. The striking symbolism of the bright red paint pooling like blood has sparked debate online. From cries of vandalism to being a powerful political/protest statement, the opinions on such an act span the spectrum. 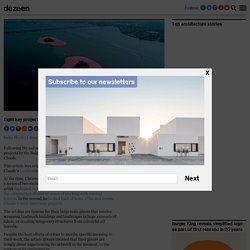 This article was originally published when Christo and Jeanne Claude's London Mastaba sculpture was unveiled in 2018. Can N95 masks breathe better? Stanford is working on it. How the Fake Lesbians of t.A.T.u. Changed Queerness in Russia Forever. Like many young Russian girls in the early 2000s, Polina Titova played a cassette filled with t.A.T.u. songs until the tape was fuzzy. 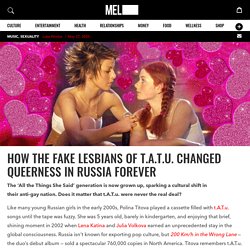 She was 5 years old, barely in kindergarten, and enjoying that brief, shining moment in 2002 when Lena Katina and Julia Volkova earned an unprecedented stay in the global consciousness. Russia isn’t known for exporting pop culture, but 200 Km/h in the Wrong Lane — the duo’s debut album — sold a spectacular 760,000 copies in North America. German cafe asks customers to wear 'swimming pool noodle hats' to help them follow social distancing.

From disinfectant sprayed in streets to the police using drones, much about lockdown has felt dystopian. 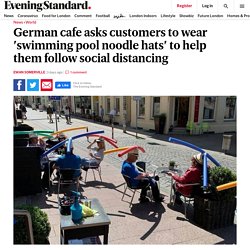 But one German cafe has given us a glimpse of how life after lockdown will likely be far from normal. The managers at Cafe & Konditorei Rothe in Schwerin, northeast Germany, have got creative with their attempts to enforce social distancing. Customers enjoying a coffee and a cake on the city’s backstreets have been pictured wearing a hat with swimming noodles attached, to ensure they do not get within six feet of another customer. Since the unusual spectacle hit Twitter, thousands have flooded in to praise the cafe for its ingenuity. Full Metal Jacket by Vollebak made from seven miles of virus-killing copper. Clothing company Vollebak has made its Full Metal Jacket from copper as the first step in developing intelligent and disease-resistant clothing in light of the coronavirus pandemic. 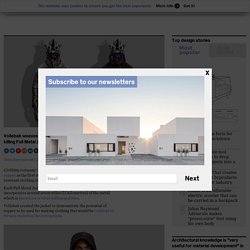 Each Full Metal Jacket is made from 65 per cent copper and incorporates around seven miles (11 kilometres) of the metal, which is known for is virus-killing qualities. Making a Damascus Steel Knife from 1000 Year-old Blades. Present&Correct. Shop Blog About Empty sets from old BBC shows. 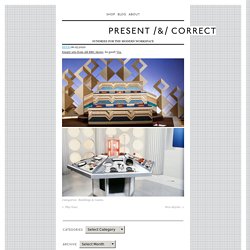 So good! Via. Restaurant deals with the rona by putting each table inside its own 'quarantine greenhouse' During this awkward stage of the pandemic where some businesses are starting to reopen but no one knows how safe that really is, here's a restaurant in Amsterdam experimenting with a trial model. 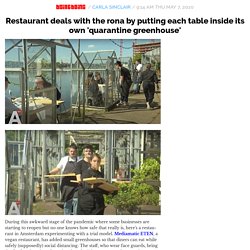 Mediamatic ETEN, a vegan restaurant, has added small greenhouses so that diners can eat while safely (supposedly) social distancing. The staff, who wear face guards, bring the food on long boards so that they don't have to enter the greenhouse while serving food and drinks. In this trial stage they are only inviting staff friends and family to dine, and all of their bookings are sold out. Learn to make a paper airplane that flies far. Paper airplane enthusiast Mahir Cave teaches you how to make two different types of paper planes (5 minutes each) in this video. 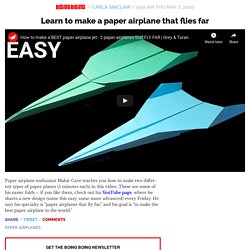 These are some of his easier folds – if you like them, check out his YouTube page, where he shares a new design (some this easy, some more advanced) every Friday. He says his specialty is "paper airplanes that fly far," and his goal is "to make the best paper airplane in the world. " Paper airplane designs Fold N Fly is a website that neatly categorizes and ranks paper airplane designs, with easy-to-follow and crystal-clear instructions for making each one.

You’ll need US Letter size paper! The Fascinating and Humble History of the NATO Watch Strap. Last Updated December, 2017: This post has been updated with new picks for 2017. Prices and links have also been updated. Building a Model High Rise. Why Some Artists Turn Away Would-Be Buyers. Artists’ motivations, when they specify that they want their works to go to museums, can be more economic than ideological. “Most Lower East Side dealers do their best to select people who will care for the work and who don’t treat it like a commodity,” said Jasmin Tsou, owner and director of the gallery JTT. Inside the surprisingly dark world of Rube Goldberg machines. By Brendan O'Connor On the eve of the 2015 Rube Goldberg Machine Contest college nationals, six teams gather in Columbus, Ohio’s Center of Science and Industry children’s museum to set up their machines around the walls of the hangar-like space and eye up the competition. The teams have made the trip here by car, their carefully assembled machines, months in the making, broken down and borne by trucks and U-Haul carriers.

Team members lean over each other to place a golf ball here and balance a domino there, assembling their delicate contraptions for the next day’s judging. Who invented the ATM machine? automated teller inventor. How to Make a Sink from Plywood and Epoxy. Daisy May Collingridge's fleshy suits quash the idea of an ideal body type. Optical Poems by Oskar Fischinger, the Avant-Garde Animator Despised by Hitler, Dissed by Disney. Yuting Chang turns blue-and-white porcelain inside out to make tableware. Taiwanese designer Yuting Chang has created a ceramics collection that wears its traditional blue adornments not on the outside, but layered internally. How to Make a Cutting Board from Bamboo Skewers. News That Will Drive You To Drink. Happy Hour News Briefs (NBC News – click image to read their story) This is the nativity scene in a Claremont California United Methodist Church showing the Holy Family inside three chain link cells topped with razor wire.

Polish Artist Turns An Ordinary Tram Stop Into A Beautiful Flower Museum. Annoyed That No One Makes Dresses With Pockets, This Woman Made One Herself. The world is full of mysteries that humanity is probably not mature enough to know, let alone understand. There’s probably no human on earth who hasn’t asked themselves questions like “why am I here?” Or “what does the future hold for me?” Masks by famous designers feature in Masters of Disguise show at Seeds. Martino Gamper, Bethan Laura Wood, Soft Baroque and Michael Marriott are among the designers that have created masks for an exhibition at London Design Festival. Expressionist Dance Costumes from the 1920s, and the Tragic Story of Lavinia Schulz & Walter Holdt. A Sanitation Worker's Collection of Salvaged Objects.

Two prominent signs hang in the street-facing window of Hunter East Harlem Gallery: “REALTORS = VULTURES,” in white-stenciled letters on a black background, and, below, “Open/ MASSAGE,” in neon green, red, and blue. 40 Times People Had No Idea What They Were Looking At, But The Internet Knew What It Was Right Away (New Pics) The internet is a veritable treasure trove of knowledge. 30 Things Worn Down Over Time That Tell Interesting Stories (New Pics) Bad Design, Cont. Real Estate Agent Posts 25 Of The Worst Home Design Finds By Her Fellow Agents. Travel Blanket Perfect For Comfortable Travel / The Layover™ by Gravel. Suburban Visions to Make Your Skin Crawl. Turn Anything Into A Cat With This Japanese Cat Mold. Modelmaker Builds Tiny Scene Straight out of Chernobyl.

FOS lets you handcraft your own sunglasses from 100% recycled plastic waste. 30 People Who Deeply Regret Shopping Online (New Pics) 50 Amazing Skills You Can Learn on YouTube. Dom Krapski, Artiste - Rosie. People Are Cracking Up At Hugh Jackman’s Ad For Ryan Reynolds’ Gin Company. Ariana Grande thank u next Review - Ariana's New Album Is Irresistible. Fresh meat: plastic wrapped and ready to deconstruct beauty standards in the age of selfies. When worlds collide: The strange, beautiful, and surreal mash-up art of Igor Skaletsky. This Company Makes Slippers That Look Just Like People’s Pets And They Are So Realistic That Dogs Get Jealous. Bad Signs, Cont. Bad Signs, Cont. 50 Times People Asked To Cover Up Their Scars And Birthmarks, And Tattoo Artists Nailed It. A little text placeholder generator of Jeff Goldblum awesome... obviously. Someone attached two leaf blowers to a sled and put their kid on it.

Quartz Obsession, December 21, 2018. Elf on the Shelf Update. 50 Hilariously Inappropriate Christmas Design Fails (New Pics) Atlasobscura. This Exists. Ukrainian Artist Removes Makeup From Dolls To Repaint Them, And Result Is Almost Too Real. Japanese Are Polishing Dirt Balls To Perfection, And The Result Will Blow You Away. Making a Beautiful Tabletop from Scrap Wood Pieces. Atlasobscura. 20+ Hilarious Times Shops Made Their Customers Laugh Out Loud. Light up surfboards could keep sharks at bay. How to Make a Frying Pan from Aluminum Foil. Japanese Are Polishing Foil Balls To Perfection, And The Result Is Too Satisfying.

LAMY's aion series by jasper morrison at 'thinking tools' 21_21 design sight. Restaurant Hires Designers To Redecorate Their Bathroom But Doesn’t Allow To Change The Tiles, So They Do This. How Bubble Wrap Is Made. Verso. Frankenstein and his Bride get mind-melting makeovers. Zayd menk made a mathematically-sound scale model of midtown manhattan out of hot glue. Paleolithic parenting and animated GIFs. Pimple popping toy cashes in on human compulsion to pick zits. How Glass Marbles Are Made. Heavy Snowfall Hits Tokyo, And The Results Are Pretty Much What You’d Expect. If you hate folding clothes, FoldiMate will fold your clothes into neat piles. 25+ Epic Kitchen Fails That Will Make You Die From Laughter.