Evan Zodl: The unexpected math of origami. The Future of Control: Luis Fernando Benedit’s Labyrinths Series. In 1972, Argentine artist Luis Fernando Benedit installed a hydroponic greenhouse environment, containing seventy tomato plants and fifty-six lettuce plants artificially supplied with light and a chemical growth formula, as well as an environment for white mice, “consisting of a maze, food source, material for burrowing, and an enclosed area for sleeping,” at MoMA. 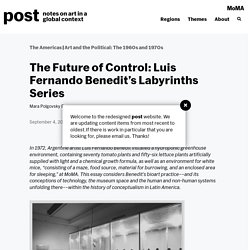 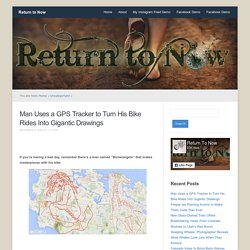 He traces them, first in pencil and then with his bike – with his GPS tracker on – and the result is magnificent! He uses an app on his phone called Strava that allows runners and cyclists to map their runs and bike rides ahead of time and then tells them how long they took to complete the route. “The best ones pop off the map,” Lund tells Bored Panda. 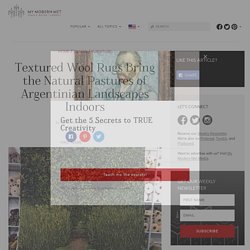 The Argentinian artist makes use of a hand-tufting technique to form lush greenery, taking several months to complete just one of her signature woolen creations. Her pieces are multifunctional, and can be used as rugs, blankets, or even a distinctive tapestry that brings a piece of the outside world indoors. Through the use of earthy tones and textured fabric, Kehayoglou is able to mimic the natural composition of moss, water, and shrubbery to produce stunning recreations of rural pastures and lush meadows.

The entire creative process surrounding Kehayoglou's work is very close to home. Her rugs are made out of discarded thread scraps collected from the family's carpet factory in Buenos Aires and she draws on the natural beauty of her native country to create her pieces. Alexandra Kehayoglou: Website | Instagram via [Colossal, Faith is Torment] (3) Facebook. Fantasy Digital Paintings Imagine a World With Giant Animals In It. This post may contain affiliate links. 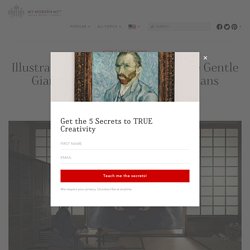 If you make a purchase, My Modern Met may earn an affiliate commission. Please read our disclosure for more info. Artist Decorates Building With a 5-Plane Mural of a Giant Flower. “Limonium,” San José Convention Center San Francisco-based artist Mona Caron shines a light on the world of unseen plants through incredible mural art. 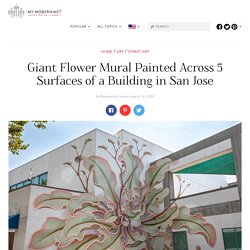 She recently completed a large-scale painting of a flower on the facade of San Jose's convention center, covering five planes with lush, pastel-colored leaves. Entitled Limonium after a species of California marsh rosemary, this whimsical mural appears to look like one continuous flower even from different angles. To do this, Caron superimposed a photograph of the plant onto the multi-plane building and made calculated reference points to instruct her painting. Yulia Brodskaya Creates Paper Quilling Artwork on Black Backgrounds. “Dream Catcher” Artist Yulia Brodskaya pushes the boundaries of the centuries-old craft known as paper quilling. 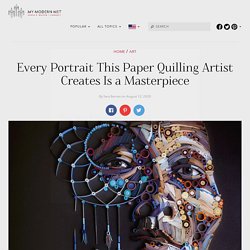 With her penchant for experimentation and a desire to make her practice a multi-disciplinary one, her awe-inspiring works utilize paper quilling's decorative techniques in a contemporary way. Part quilling and part Impressionist-style art, Brodskayana’s latest pieces feature portraits on a black background. The colorful strips of paper vibrate against the dark ground and showcase the myriad ways in which she manipulates the materials. Artist Excavates Discarded Books to Transform Their Pages into Stunning Jewelry. London-based artist Jeremy May gives discarded books a new lease on life with his wearable sculptures. 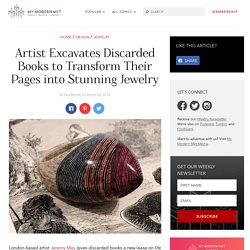 Images and text are harvested from these publications and formed into modern rings, bracelets, necklaces, and more. Their colorfully layered and patterned designs hardly resemble books at all–instead, they appear as lustrous, stylish accessories that mesmerize us with their beautiful curves and shapes. May goes through the same meticulous process to create each piece of jewelry. Map Art Sees Faces Emerge From Topographic Contours and Patterns. Beginning with a white page can be overwhelming for any artist, which is why Ed Fairburn adopted an unusual canvas. 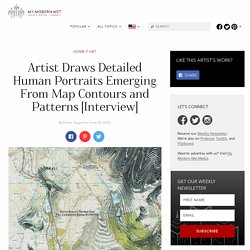 He repurposes old maps, transforming them into beautiful, highly-detailed portraits. By merging landscape and humanity, Fairburn reminds us that we are a product of our environment—and vice versa. Fairburn often spends hours studying the map’s terrain before beginning his artistic process. He then uses traditional materials—such as ink, paint, or pencil—to slowly extract facial features from roads, rivers, and mountainous contours by making gradual changes to the map.

Meticulous Pattern Arrangement is a Soothing Things Organized Neatly. This post may contain affiliate links. If you make a purchase, My Modern Met may earn an affiliate commission. Please read our disclosure for more info. Calling himself an “object arranger,” Adam Hillman sees the beauty in things organized neatly.

Taking everyday things like matches, cotton swabs, and push pins, he meticulously places them in mesmerizing patterns that transform them from the ordinary into the extraordinary. Divorced from their original function, the items hardly look like themselves, and with Hillman's intervention, they function as a single form that electrifies the composition. I Continue Posing With My Cardboard Cutouts At Sunset And Here Is The Result (30 New Pics) As a writer and a filmmaker, I like to get away from the computer each day and make something with my hands. 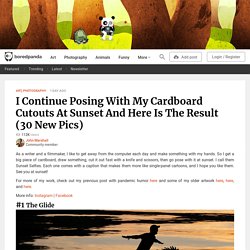 So I get a big piece of cardboard, draw something, cut it out fast with a knife and scissors, then go pose with it at sunset. I call them Sunset Selfies. Artist Strips Makeup From Mass-Produced Figurines into Stunning Doll Art. This post may contain affiliate links. 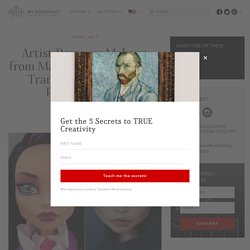 If you make a purchase, My Modern Met may earn an affiliate commission. Please read our disclosure for more info. Diru.ru. The Science of Conversation by Paul Spooner. Stay safe and healthy. Please practice hand-washing and social distancing, and check out our resources for adapting to these times. Explore more ideas with a Pinterest account. A Factory that Processes Your Dandelion Wishes. LOS ANGELES — Across every metropolitan area, there are numerous electrical substations that keep power pulsing through the city.

They’re home to steel behemoths that generate high-voltage electrical currents, which speed through the grid of cables and transmission towers until they eventually power the lights in our home. Substations are dangerous; a wrong step could electrocute someone in an instant. But amazingly, if you look carefully, you’ll see that electricity does not deter the life of flora and fauna. Poking through the gravel, there may be a fragile dandelion shedding its seeds in the wind. On its surface, there is nothing linking a fleet of transformers to a delicate weed, but the anonymous art collective simply known as the Art Department — known for constructing a teahouse in Griffith Park, dropping jacaranda petals in alleyways, and nurturing bioluminescent algae — has found a way to show a kinship between these two subjects.

And Now, Abandoned Dollhouses for your Inner Demon Child. Andy Goldsworthy Nature Art in Winter. Andy Goldsworthy is a fascinating British artist who does poetic and beautiful nature art. His work is fleeting, most of it lasting just mere minutes before being washed or blown away. We’ve posted about him before, and his work lingers in the mind far longer than it lasts in nature. Some of his work melts, some of it is so fragile that it probably lasts just until the camera shutter clicks. Unfortunately his creations are often poorly photographed, and searches for him return low resolution, muddy images, which clearly do not do his work justice. The bulk of his fleeting nature work was done in the 70’s and 80’s in his native England, although more permanent installation have been recently made in prestigious museums like The National Museum of Scotland, The DeYoung, The National Gallery of Art, and many others.

Czech grandma transforms small village into her own art gallery. Artist Crafts Incredible Japanese Dragon Sculpture out of Palm Tree. In Uruma, a city located in Okinawa Prefecture, Japan, there’s an annual arts festival called The Shimadakara (meaning “island treasure”) that celebrates the artists and crafters of Japan’s southern islands. Each year, people showcase their talents by creating works that are often made from natural materials found in their local environment.

Murals Composed of Frenetic Linework by DALeast. A New Book Compiles Work from 84 Contemporary Artists Who are Reinventing Embroidery. Craft. Elaborate Embroidery by Laura Baverstock Forms Insects and Animals from Precious Metals and Colored Threads. Artist Inserts People From Classical Paintings Into Today’s World, And The Result Is Surprisingly Good. Have you ever thought how would those people from classical paintings look if they suddenly started living amongst us? Diana yevtukh 'heals' scarred trees with intricate embroidered artworks. On artist and embroider diana yevtukh’s contemplative and long walks through nature, she began to think about the often overlooked empty spaces in the bark of the trees, which she noticed every day. those occasional spots, where the trunk is left bare, are formed from fallen bark that resulted from its growth process, insect damage, or disease. yevtukh started thinking about these spots as ‘scars’, and found these voids to be a place of emptiness within which to make an artistic statement.

‘I felt strongly that this gap on the trunk has to be filled with something,’ she says. Crocheter Uses Her Skills To Turn Dried Leaves Into Works Of Art (30 Pics) "As you can imagine, working with fragile dry leaves requires a lot of patience and a steady hand, but the focus of my work for me lies on the effect it has on the viewer, on the ideas that flow into the compositions and the thoughts the pieces can evoke. To create a piece that not only is intriguing as to how it is made, but also touches the viewer on a deeper level," Susanna told Bored Panda about her amazing art. A Mixture Of Innocence, Beauty, Violence, Decadence, Japanese And Russian Folklore – In Bizarre Works By Vania Zhuravlev.