Causes and Effects For Illegal Logging

Leading the Fight Against Illegal Logging  Did you know that up to 30 percent of all wood traded globally has been obtained illegally? 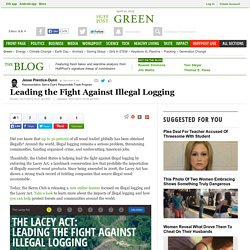 Around the world, illegal logging remains a serious problem, threatening communities, funding organized crime, and undercutting American jobs. Thankfully, the United States is helping lead the fight against illegal logging by enforcing the Lacey Act, a landmark conservation law that prohibits the importation of illegally sourced wood products. Since being amended in 2008, the Lacey Act has shown a strong track record of holding companies that source illegal wood accountable.

Kleenex Cottonelle > The Environment > Illegal Logging WWF defines illegal logging as occurring when timber is harvested or traded in violation of relevant national or sub-national laws or where access to forest resources or trade in forest products is authorized through corrupt practices. 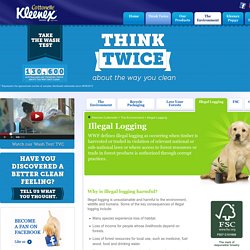 An estimated 18 million acres (7.3 million hectares) of forest, which is roughly the size of the country of Panama, are lost each year, according to the United Nations' Food and Agriculture Organization (FAO). Some other statistics: About half of the world's tropical forests have been cleared (FAO) Forests currently cover about 30 percent of the world’s land mass (National Geographic) Forest loss contributes between 6 percent and 12 percent of annual global carbon dioxide emissions (Nature Geoscience) About 36 football fields worth of trees lost every minute (World Wildlife Fund (WWF)) Deforestation occurs around the world, though tropical rainforests are particularly targeted. NASA predicts that if current deforestation levels proceed, the world's rainforests may be completely in as little as 100 years. Error loading player: No playable sources found Weather vs. 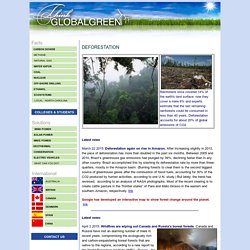 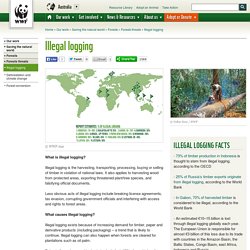 What causes illegal logging? Illegal logging exists because of increasing demand for timber, paper and derivative products (including packaging) – a trend that is likely to continue. But not all wood removal is due to trade. Orangutan Foundation International. Illegal logging negatively impacts the economic and ecological systems of optimal forest management. 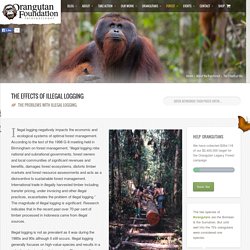 According to the text of the 1998 G-8 meeting held in Birmingham on forest management, “illegal logging robs national and subnational governments, forest owners and local communities of significant revenues and benefits, damages forest ecosystems, distorts timber markets and forest resource assessments and acts as a disincentive to sustainable forest management. International trade in illegally harvested timber including transfer pricing, under invoicing and other illegal practices, exacerbates the problem of illegal logging.” The magnitude of illegal logging is significant. Research indicates that in the recent past over 70 per cent of timber processed in Indonesia came from illegal sources.

Illegal logging is not as prevalent as it was during the 1980s and 90s although it still occurs. Illegal Logging Portal.