Police investigate death of 15 illegal miners in Springs:Wednesday 9 September 2015. Police and other law enforcement officers have been deployed to the area to monitor the situation. 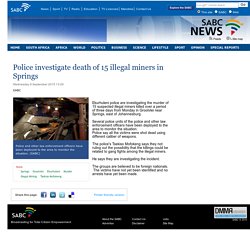 (SABC) Ekurhuleni police are investigating the murder of 15 suspected illegal miners killed over a period of three days from Monday in Grootvlei near Springs, east of Johannesburg. Several police units of the police and other law enforcement officers have been deployed to the area to monitor the situation. Police say all the victims were shot dead using different caliber of weapons. The police's Tsekiso Mofokeng says they not ruling out the possibility that the killings could be related to gang fights among the illegal miners.

He says they are investigating the incident. The groups are believed to be foreign nationals. Police searching for Crystal Park killers:Monday 16 March 2015. Illegal mining costing SA billions of rands:Tuesday 17 February 2015. Illicit activity also presents great risks as miners are exposed to explosives, harmful toxins and electrocution. 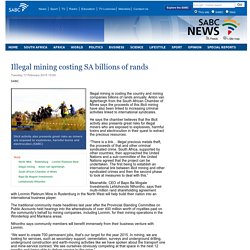 (SABC) Illegal mining is costing the country and mining companies billions of rands annually. Anton van Agterbergh from the South African Chamber of Mines says the proceeds of this illicit mining have also been linked to increasing criminal activities linked to international syndicates. He says the chamber believes that the illicit activity also presents great risks for illegal miners who are exposed to explosives, harmful toxins and electrocution in their quest to extract the precious resources. “There is a link… illegal precious metals theft, the proceeds of that and other criminal syndicated crime. Meanwhile, CEO of Bapo Ba Mogale Investments Lehlohonolo Nthontho, says their multi-million rand shareholding agreement with Lonmin Platinum Mine in Rustenburg in the North West will help build their nation into an international business player. Illegal land invaders warned:Tuesday 5 May 2015.

One dead in police shootout with illegal miners :Thursday 13 August 2015. Police will continue to monitor the area around the old number 13 shaft as they believe more armed suspects are hiding underground. 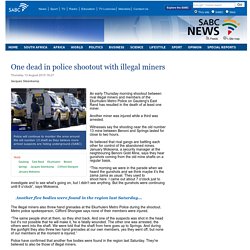 (SABC) An early Thursday morning shootout between rival illegal miners and members of the Ekurhuleni Metro Police on Gauteng's East Rand has resulted in the death of at least one miner. Another miner was injured while a third was arrested. Witnesses say the shooting near the old number 13 mine between Benoni and Springs lasted for close to two hours. Its believed that rival gangs are battling each other for control of the abandoned mines. “This morning we were in the parade when we heard the gunshots and we think maybe it’s the zama zama as usual. Another five bodies were found in the region last Saturday... The illegal miners also threw hand grenades at the Ekurhuleni Metro Police during the shootout. “The same people shot at them, so they shot back. Police have confirmed that another five bodies were found in the region last Saturday. 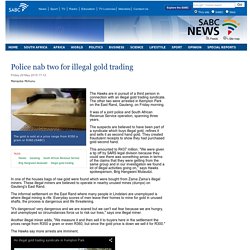 (SABC) The Hawks are in pursuit of a third person in connection with an illegal gold trading syndicate. The other two were arrested in Kempton Park on the East Rand, Gauteng, on Friday morning. It was of a joint police and South African Revenue Service operation, spanning three years. The suspects are believed to have been part of a syndicate which buys illegal gold, refines it and sells it as second hand gold. This amounted to R437 million.

In one of the houses bags of raw gold were found which were bought from Zama Zama’s illegal miners. The informal settlement on the East Rand where many people in Lindelani are unemployed is where illegal mining is rife. "It's dangerous! Another illegal miner adds, "We measure it and then sell it to buyers here in the settlement the prices range from R350 a gram or even R360, but since the gold price is down we sell it for R300. " Bid to rescue trapped illegal miners continues:Monday 17 February 2014. The illegal miners face arrest upon their release from the shaft. 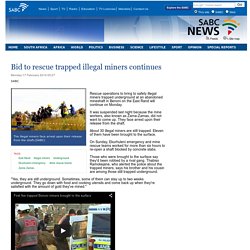 (SABC) Rescue operations to bring to safety illegal miners trapped underground at an abandoned mineshaft in Benoni on the East Rand will continue on Monday. It was suspended last night because the mine workers, also known as Zama-Zamas, did not want to come up. They face arrest upon their release from the shaft. About 30 illegal miners are still trapped. On Sunday, Ekurhuleni emergency and mine rescue teams worked for more than six hours to re-open a shaft blocked by concrete slabs. Those who were brought to the surface say they'd been robbed by a rival gang.

"Yes, they are still underground. [<a href="//storify.com/sabcnewsonline/bid-to-rescue-trapped-illegal-miners-continues" target="_blank" title="">View the story "Bid to rescue trapped illegal miners continues" on Storify</a>]