Articles and information about the world of illegal drugs, trafficking, profit and procedures. 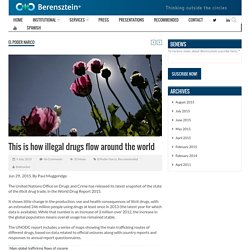 By Paul Muggeridge. The United Nations Office on Drugs and Crime has released its latest snapshot of the state of the illicit drug trade, in the World Drug Report 2015. It shows little change in the production, use and health consequences of illicit drugs, with an estimated 246 million people using drugs at least once in 2013 (the latest year for which data is available). While that number is an increase of 3 million over 2012, the increase in the global population means overall usage has remained stable. The UNODC report includes a series of maps showing the main trafficking routes of different drugs, based on data related to official seizures along with country reports and responses to annual report questionnaires. Production of cocaine has continued to decline, with 2013 seeing the lowest level of coca bush cultivation since the mid-1980s. Author: Paul Muggeridge is Head of Content at Formative Content. After 40-Year Fight, Illicit Drug Use at All-Time High

"America's public enemy number one in the United States is drug abuse. 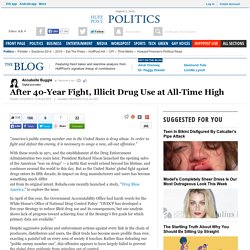 In order to fight and defeat this enemy, it is necessary to wage a new, all-out offensive. " With these words in 1971, and the establishment of the Drug Enforcement Administration two years later, President Richard Nixon launched the opening salvo of the American "war on drugs" -- a battle that would extend beyond his lifetime, and continues around the world to this day. But as the United States' global fight against drugs enters its fifth decade, its impact on drug manufacturers and users has become something much differ ent from its original intent.

Rehabs.com recently launched a study, "Drug Bless America," to explore the issue. Understanding-drug-markets-2009_en. Articles about Illegal Drugs - latimes. January 27, 2014 | By Andrew Tangel and Chris O'Brien NEW YORK - The federal government has arrested one of the biggest names in the bitcoin community in the latest crackdown on digital currencies and their illicit use. 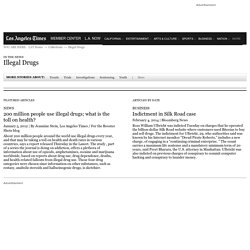 Charlie Shrem, chief executive of digital currency exchange BitInstant, stands accused with a Florida man of laundering money through a notorious drug-trafficking website. Shrem is also vice chairman of the Bitcoin Foundation, a nonprofit group aimed at promoting the digital currency. He and codefendant Robert M. Faiella of Cape Coral, Fla., are accused of selling more than $1 million worth of bitcoins to people attempting to buy and sell illegal drugs on the Silk Road website, which the FBI shut down in October. November 4, 2013 | By Ricardo Lopez Johnson & Johnson will pay more than $2.2 billion in criminal and civil fines for marketing drugs Risperdal, Invega and Natrecor for uses they weren't approved for, the U.S. 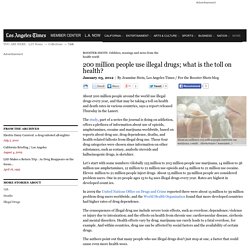 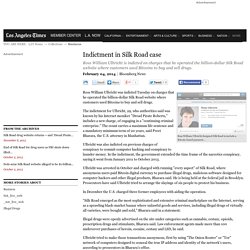 The indictment for Ulbricht, 29, who authorities said was known by his Internet moniker "Dread Pirate Roberts," includes a new charge, of engaging in a "continuing criminal enterprise. " The count carries a maximum life sentence and a mandatory minimum term of 20 years, said Preet Bharara, the U.S. attorney in Manhattan. Ulbricht was also indicted on previous charges of conspiracy to commit computer hacking and conspiracy to launder money. In the indictment, the government extended the time frame of the narcotics conspiracy, saying it went from January 2011 to October 2013. In December the U.S. charged three former employees with aiding the operation. 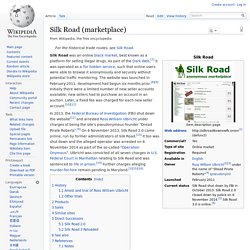 In 2013, the Federal Bureau of Investigation (FBI) shut down the website[12] and arrested Ross William Ulbricht under charges of being the site's pseudonymous founder "Dread Pirate Roberts".[4] On 6 November 2013, Silk Road 2.0 came online, run by former administrators of Silk Road.[13] It too was shut down and the alleged operator was arrested on 6 November 2014 as part of the so-called "Operation Onymous”. Ulbricht was convicted of all seven charges in U.S.

Federal Court in Manhattan relating to Silk Road and was sentenced to life in prison.[14] Further charges alleging murder-for-hire remain pending in Maryland.[2][15][16] Silk Road was founded in February 2011.[17] The name "Silk Road" comes from a historical network of trade routes, started during the Han Dynasty (206 BC – 220 AD), between Europe, India, China, and many other countries on the Afro-Eurasian landmass.

Who Is Ross Ulbricht? Piecing Together The Life Of The Alleged Libertarian Mastermind Behind Silk Road.