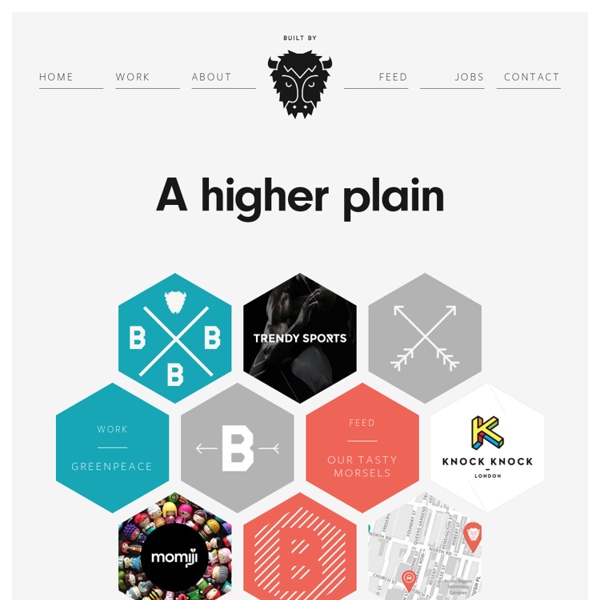 CO OPCO OP By Paul Newman. Thomas Edison quoted it best: “I have not failed. I’ve just found 10,000 ways that won’t work.” If you’re any bit like me, you’re the kind of person that can’t help but believe that “better” things take time and perseverance. Because it’s part and parcel to this process, reaching better means being brave, honest, stubborn, smart, stupid, angry and fun, among a host of other adjectives. For entrepreneurial minded people, it can’t be any other way. Gallery Archives – Responsive Deck David Urankar first drew attention with the campaign for Mura collection 2008/09. This responsive web design was created by @lumeaa and suggested by @davidurankar for inclusion in the responsive websites gallery collection. Rally Interactive is an application development firm from Park City, Utah. With a focus on latest technologies to build digital things for clients.

Grid Item Animation Layout - Demo 1 Previous Demo Back to the Codrops article Animated Grid Layout Related Demos PUHA Studio We are a team of designers, developers and technologists with a passion for digital design and branding. With a conceptual approach, a sense of contemporary culture and advanced technology we deliver creative, strategic and innovative solutions that help brands stay meaningful in an ever-changing world. “… change is the only constant in todays world. One can adapt or simply fade away.” Zoomooz.js Zoomooz is: 6KB gzipped and 18KB minified. This includes everything but jQuery. Make any web page zoom. Latest version: 1.1.9 (Nov 11, 2013, hacky fix for the back and forward buttons #66)

2014: The year we all go 4K Sub-$1000 4K displays and how they relate to responsive web design. This year at CES 4K televisions were a big deal. 4K UltraHD displays for computers have been available for awhile, there’s even one on Apple’s website, but at $3,500 they’ve been cost prohibitive. That all changes with the announcement of new 4K displays priced at less than $1000. Affordable 4K Meet the Dell 28 UltraHD monitor, a $699 28" 4K desktop display. It’s poised to be one of the most cost effective 4K displays on the market. Animated Map Path for Interactive Storytelling An interactive journey where a Canvas map path is animated according to the content that is scrolled on the page. View demo Download source Today we’d like to share an experimental demo with you.

Flat design casts a long shadow Whilst many designers embrace flat design wholeheartedly, it seems a growing number have already tired of its charms and are casting around for the next big thing. One contender, being championed by some, is “long shadow” design. Long shadow design produces an effect like looking at an object late on a Winter’s day, when the shadows lengthen to dramatic proportions. The effect adds a great deal of depth while still retaining an essentially flat aesthetic. Typified by a 45 degree shadow that extends well beyond the length of a traditional drop shadow, the diagonal lines are reminiscent of early Soviet posters and collages by the likes of Malevich — produced before Socialist Realism became the only acceptable style.