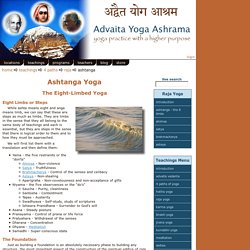 Introduction to Ashtanga Yoga and Founder Pattabhi Jois. History Ashtanga (also spelled Astanga) means "eight limbs" in Sanskrit, which refers to the eight limbs of yoga laid out in the Yoga Sutras of Patanjali. 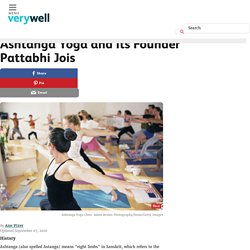 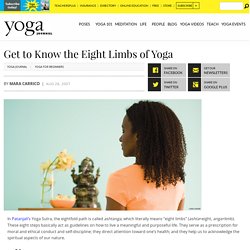 These eight steps basically act as guidelines on how to live a meaningful and purposeful life. They serve as a prescription for moral and ethical conduct and self-discipline; they direct attention toward one’s health; and they help us to acknowledge the spiritual aspects of our nature. 1. Yama The first limb, yama, deals with one’s ethical standards and sense of integrity, focusing on our behavior and how we conduct ourselves in life. Pose Prescription: Sequence for Festival Recovery. 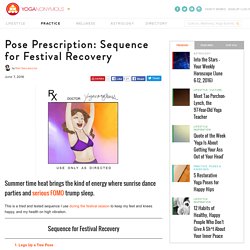 This is a tried and tested sequence I use during the festival season to keep my feet and knees happy, and my health on high vibration. Sequence for Festival Recovery 1. Legs Up a Tree Pose. 35 Yoga Books to Read This Summer. The weather is getting warmer and we're beginning to break out our sunscreen, bathing suits, and of course, poolside reading material. 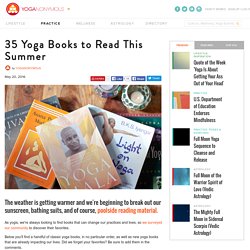 As yogis, we're always looking to find books that can change our practices and lives, so we surveyed our community to discover their favorites. Below you'll find a handful of classic yoga books, in no particular order, as well as new yoga books that are already impacting our lives. Did we forget your favorites? Be sure to add them in the comments. Techniques To Fight Fatigue. The following exercises are from the book Physical Wisdom. 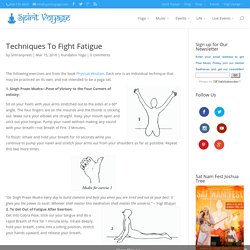 Each one is an individual technique that may be practiced on its own, and not intended to be a yoga set. 1. Singh Praan Mudra—Pose of Victory to the Four Corners of Infinity: Sit on your heels with your arms stretched out to the sides at a 60° angle. Go Physically Deeper in Yoga Poses. If you're looking to go deeper in your physical asana practice, learning a bit about your body's mechanics is a great way to start. 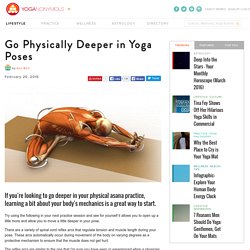 Try using the following in your next practice session and see for yourself it allows you to open up a little more and allow you to move a little deeper in your pose. There are a variety of spinal cord reflex arcs that regulate tension and muscle length during your pose. Yogamonkey. The Science behind Yoga and Stress. There are two functional parts of the brain that play a key role in stress. 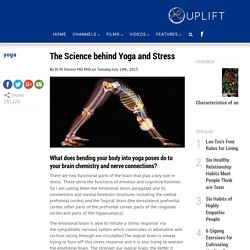 These serve the functions of emotion and cognitive function. So I am calling them the ’emotional’ brain (amygdala and its connections and medial forebrain structures including the medial prefrontal cortex) and the ‘logical’ brain (the dorsolateral prefrontal cortex, other parts of the prefrontal cortex, parts of the cingulate cortex and parts of the hippocampus). The Psoas: Muscle of The Soul. I was delighted when I first came across Liz Koch’s amazing work because it confirmed much of what I’d been intuiting on my own. I had begun to open and close my yoga practise with hip opening poses with the specific intention of releasing tension in my psoas and hip flexors.

I’d breathe and imagine tension flowing out of constricted muscles to be released as energy into the torso. It worked, I’d feel my body soften yet somehow grow stronger. Curejoy. Kemetic Smai Tawi London Classes. What Is Kemetic Yoga? The above depiction shows the Divinities Heru and Djhuty binding the Sema symbol while the Pharoah sits atop. 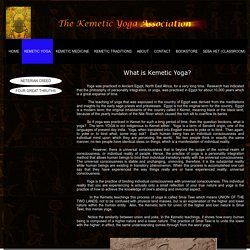 The one on the left holds the symbol with a papyrus plant (lower self) and the one on the right binds with a lotus flower (higher self). This means that the duality of spirit and matter, temporal and transcendent becomes unified in such a way that one's temporal nature dissolves into the transcendent reality; one's higher nature. Many people ask, is yoga a religion? The Seven Minds. What is Kemetic Yoga? 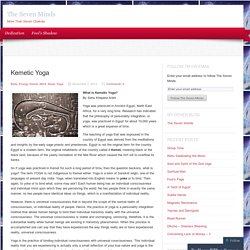 By Sehu Khepera Ankh Yoga was practiced in Ancient Egypt, North East Africa, for a very long time. Research has indicated that the philosophy of personality integration, or yoga, was practiced in Egypt for about 10,000 years which is a great expanse of time.