The Technique of Kriya Yoga. Kriya Yoga is so effective because it works directly with the source of growth — the spiritual energy deep in our spines. 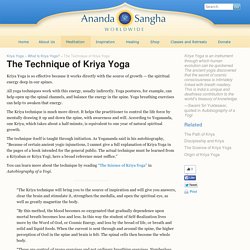 All yoga techniques work with this energy, usually indirectly. Yoga postures, for example, can help open up the spinal channels, and balance the energy in the spine. Yoga breathing exercises can help to awaken that energy. The Kriya technique is much more direct. It helps the practitioner to control the life force by mentally drawing it up and down the spine, with awareness and will. The technique itself is taught through initiation. KRIYA YOGA TECHNIQUES BY LAHIRI MAHASHAYA. Kriya Yoga Meditation Technique.

Kriya Yoga meditation refers to actions Designed to get rid of obstructions involving body and mind. 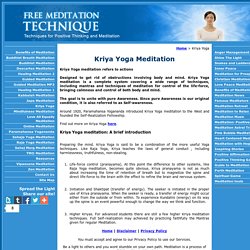 Kriya Yoga meditation is a complete system covering a wide range of techniques, including mantras and techniques of meditation for control of the life-force, bringing calmness and control of both body and mind. The goal is to unite with pure Awareness. Since pure Awareness is our original condition, it is also referred to as Self-awareness. Around 1920, Paramahansa Yogananda introduced Kriya Yoga meditation to the West and founded the Self-Realization Fellowship. Find out more on Kriya Yoga here. Kriya Yoga meditation: A brief introduction Preparing the mind. Home | Disclaimer | Privacy Policy You must accept and agree to our Privacy Policy to use our Services. Be a light to others and you wont stumble on your own path. Please email your thoughts, suggestions, opinions and inspirations to us via our Contact Us page. Kriya Yoga. The Science of Kriya Yoga Excerpts from Autobiography of a Yogi by Paramahansa Yogananda Kriya Yoga is a simple, psychophysiological method by which human blood is decarbonated and recharged with oxygen. 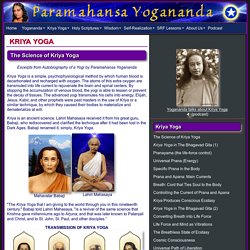 The atoms of this extra oxygen are transmuted into life current to rejuvenate the brain and spinal centers. Kriya Yoga Meditation Technique in Paramhansa Yogananda’s Autobiography of a Yogi — Offers Proof of the Existence of God. “After the mind has been cleared by Kriya Yoga of sensory obstacles, meditation furnishes a twofold proof of God. 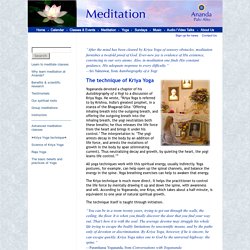 Ever-new joy is evidence of His existence, convincing to our very atoms. Also, in meditation one finds His constant guidance, His adequate response to every difficulty.” —Sri Yukteswar, from Autobiography of a Yogi Yogananda devoted a chapter of his Autobiography of a Yogi to a discussion of Kriya Yoga. He wrote, “Kriya Yoga is referred to by Krishna, India’s greatest prophet, in a stanza of the Bhagavad Gita: ‘Offering inhaling breath into the outgoing breath, and offering the outgoing breath into the inhaling breath, the yogi neutralizes both these breaths; he thus releases the life force from the heart and brings it under his control.’ All yoga techniques work with this spiritual energy, usually indirectly. The Kriya technique is much more direct. The technique itself is taught through initiation. Q. A. Q. A. Q. A. The Kriya Yoga Path of Meditation. "By the definite science of meditation known for millenniums to the yogis and sages of India, and to Jesus, any seeker of God can enlarge the caliber of his consciousness to omniscience to receive within himself the Universal Intelligence of God. 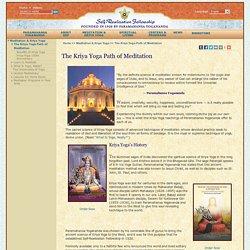 " — Paramahansa Yogananda Wisdom, creativity, security, happiness, unconditional love — is it really possible to find that which will bring us real and lasting joy? Kriyā. Kriyā (in Sanskrit "action, deed, effort"(in Tamil i/ˈ/Kiriyai)) most commonly refers to a "completed action", technique or practice within a yoga discipline meant to achieve a specific result. 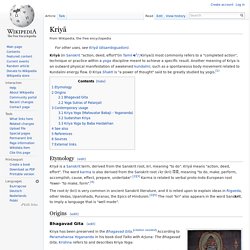 Another meaning of Kriya is an outward physical manifestation of awakened kundalini, such as a spontaneous body movement related to Kundalini energy flow. O Kriya Shakti is "a power of thought" said to be greatly studied by yogis.[1] Etymology[edit] Kriyā is a Sanskrit term, derived from the Sanskrit root, kri, meaning "to do". The root kṛ (kri) is very common in ancient Sanskrit literature, and it is relied upon to explain ideas in Rigveda, other Vedas, Upanishads, Puranas, the Epics of Hinduism.[2][5] The root "kri" also appears in the word Sanskrit, to imply a language that is "well made".

Origins[edit] Bhagavad Gita[edit] Kriya has been preserved in the Bhagavad Gita. Kriya Yoga. Kriya Yoga (क्रिया योग) is described by its practitioners as the ancient Yoga system revived in modern times by Mahavatar Babaji through his disciple Lahiri Mahasaya, c. 1861. 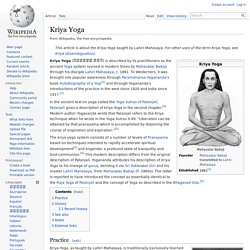 To Westerners, it was brought into popular awareness through Paramahansa Yogananda's book Autobiography of a Yogi[2] and through Yogananda's introductions of the practice in the west since 1920 and India since 1917.[3] In the ancient text on yoga called the Yoga Sutras of Patanjali, Patanjali gives a description of kriya Yoga in the second chapter.[4] Modern author Yogananda wrote that Patanjali refers to the Kriya technique when he wrote in the Yoga Sutras II:49: "Liberation can be attained by that pranayama which is accomplished by disjoining the course of inspiration and expiration. "[5] Practice[edit] History[edit] Recent history[edit] Through Lahiri Mahasaya, Kriya Yoga soon spread throughout India. See also[edit] Notes[edit] English II.pdf.