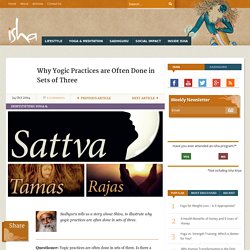 Questioner: Yogic practices are often done in sets of three. Is there a reason why? Sadhguru: There are many ways to look at this. This is a dialectical culture. A story will say one thing, but it means something else. In modern science, they call it “fuzzy logic,” which is a good way to describe it. Asanas, Mudras and Bandhas - Awakening Ecstatic Kundalini - books-amb-sample.pdf. A Total Experience. Delivered by Swami Satyananda Saraswati at the Convention of the European Union of National Federations of Yoga in Zinal, Switzerland, 1977. 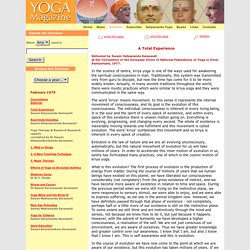 VEDA - Vedas and Vedic Knowledge Online - Vedic Encyclopedia, Bhakti-yoga in vedas, Library. KarmaJiva (soul)SupersoulKrsna and Radha, GolokaSri Radha's name in the SB Karma - definition: (BG 8.3) "activity pertaining to the development of mat. bodies"karmabhih praninam loke sarva cesta pravartakah: Karma is the cause of all activities among the living beings of this world. 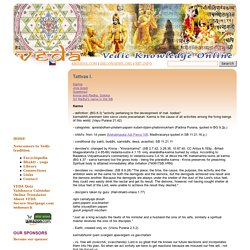 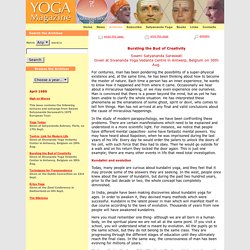 For centuries, man has been pondering the possibility of a super-physical existence and, at the same time, he has been thinking about how to become the master of nature. Each time a person has an inner experience, he wants to know how it happened and from where it came. Occasionally we hear about a miraculous happening, or we may even experience one ourselves. Man is convinced that there is a power beyond the mind, but as yet he has been unable to clarify the whole situation. He has interpreted these phenomena as the emanations of some ghost, spirit or devil, who comes to tell him things. 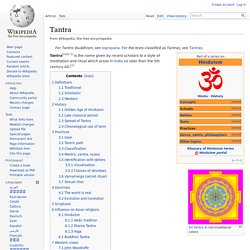 For the texts classified as Tantras, see Tantras. Tantra[note 1] is the name given by recent scholars to a style of meditation and ritual which arose in India no later than the 5th century AD.[1] Definitions[edit] Several definitions of Tantra exist. Guru Tattva – Freedom Vidya. Longevity and Enlightenment. Shuang Yan Guan Zhu There exists a paradox between longevity and enlightenment. 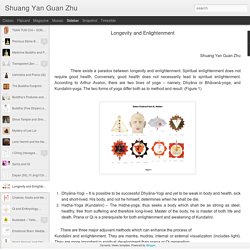 Spiritual enlightenment does not require good health. Conversely, good health does not necessarily lead to spiritual enlightenment. According to Arthur Avalon, there are two lines of yoga – namely, Dhyāna or Bhāvanā-yoga, and Kundalini-yoga. The two forms of yoga differ both as to method and result. Dhyāna-Yogi – It is possible to be successful Dhyāna-Yogi and yet to be weak in body and health, sick and short-lived. There are three major adjuvant methods which can enhance the process of Kundalini and enlightenment. Devamaya-Yoga. Devamaya-Yoga. Devamaya-Yoga: Tantra - what is it really? Tantra is an ancient philosophy, with practices which help to emancipate the mind from its unawakened state, it’s non-transcendental state. 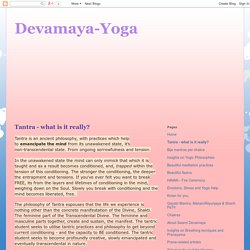 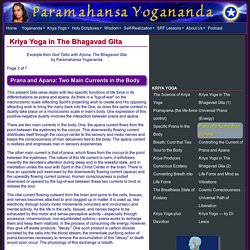 As there is a "tug-of-war" on the macrocosmic scale reflecting Spirit's projecting wish to create and His opposing attracting wish to bring the many back into the One, so does this same contest in duality take place on a microcosmic scale in man's body. Prana and Apana, A Lecture by Charles F. Lutes. Prana and Apana Prana is the life force itself. 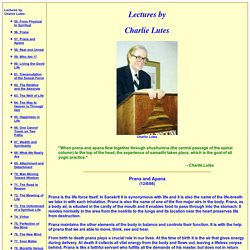 Prana. Prana (प्राण, prāṇa) is the Sanskrit word for "life force"; in yoga, Indian medicine, and martial arts, the term refers to a cosmic energy believed to come from the sun and connecting the elements of the universe. 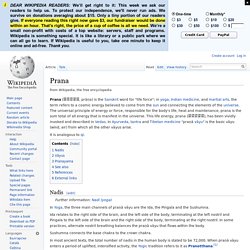 The universal principle of energy or force, responsible for the body's life, heat and maintenance, prana is the sum total of all energy that is manifest in the universe. This life energy, prana (प्राण), has been vividly invoked and described in Vedas. Moscow Sri Aurobindo Center of Integral Yoga - Practice - Antahkarana. Practice Antahkarana Pranas (winds) Bindu: Pinnacle of the Three Streams of Yoga Meditation, Vedanta, and Tantra. Piercing the Pearl of Non-Dual Wisdom by Swami Jnaneshvara Bharati This article is available in print: Symbols of the Bindu, Dot, or Point Understanding the end of the journey: Bindu means Point or Dot, is sometimes likened to a Pearl, and is often related to the principle of a Seed.

This is not just a poetic choice of words or philosophy. Five Prana Vayus. The-Five-Pranas.jpg (JPEG Image, 1044 × 664 pixels) - Scaled (98%) Yoga: Prana Vayu – Five vital forces. (also see Pranayama and Kundalini) The Vayus – Vital winds “Prana” is the one life force that permeates all living things and in fact all matter. This cohesive, animating force is also known as “Maha Prana” or great prana. Five currents of prana and how they organize your physiology (5 Vayus ) I heard a theory (and I don’t know whether or not it’s true) that western medicine grew out of studying cadavers, while in the eastern world cutting up the dead bodies was frowned upon. As a result, western medicine doesn’t have a concept of vital energy in the body, while eastern physicians had developed sophisticated ideas about the flow of human energy from having to study living-breathing human beings.