The 10-Minute Core-Blasting Pilates Workout [INFOGRAPHIC] At first glance, a Pilates studio might look like a medieval torture chamber, with strange straps and metal springs hanging from the ceiling and padded platforms called “the Reformer.” 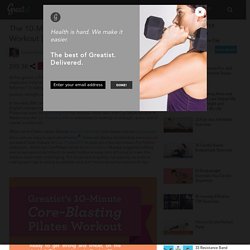 In reality, Pilates is a form of exercise that aims to develop flexibility, good posture, strength, and balance all at the same time . In the early 20th century, Joseph Pilates invented the series of movements to help English veterans recover from injuries sustained during the First World War. Since then, Pilates has been the go-to regimen for anyone—from New York City Ballet dancers to Madonna to the San Francisco 49ers—interested in working on strength, grace, and of course, a solid core. While some Pilates classes feature special machines, mat classes require bodyweight alone and are easy to replicate at home . 20 min. Yoga Sessions from YogaDownload.com by Wizzard Media. 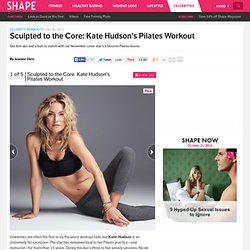 The star has remained loyal to her Pilates practice—and instructor—for more than 15 years. During the duo’s three to five weekly sessions, Nicole Stuart puts our cover star through a challenging routine that includes a different mix of moves every time. How it works: Three to five times a week, do each exercise in order. You will need: Mat Recommended: Sets: Reps: ALie faceup with arms extended overhead, palms facing ceiling. You can use your keyboard to see the next slide ( ← previous, → next) Pilates: Get Facts on Exercises and Techniques. Author: Richard Weil, MEd, CDE Medical Editor: William C. 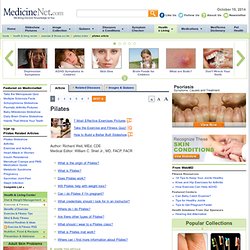 Shiel Jr., MD, FACP, FACR Pilates is a popular method of exercise in the United States, with more than 5 million individuals participating. What is Pilates, and should you be doing it? I'll answer those questions and more in this article. What is the origin of Pilates? Admittedly, the history of many ancient fitness activities is sometimes sketchy. What is Pilates? The Pilates "method," as it is now known, is an exercise system focused on improving flexibility, strength, and body awareness, without necessarily building bulk. Two of the key elements of Pilates are core muscle strength* and spinal alignment. During a Pilates session, whether it's on the machines or the floor, your instructor will continuously prompt you to concentrate deeply on your core muscles, as well as on your breath, the contraction of your muscles, and the quality (not quantity) of your movements. Immunity-Boosting Yoga. Common Mistakes in Bridge Pose — YOGABYCANDACE. Heads up: We just launched the YBC Yoga Forum, a place for health conscious people to come together and chat about everything from chaturangas to chocolates. 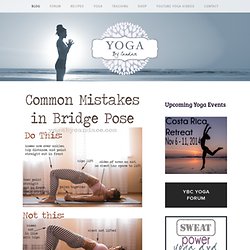 Come join! We'd love to connect! Bridge pose is an inversion I often introduce toward the end of a flow class once everyone is really warmed up. 12 Yoga Poses to Alleviate Back Pain. Happiness: Mind & Body By: Jenn Bodnar // July 24, 2014 Back pain can be caused by sitting, standing, doing nothing or sprinting. 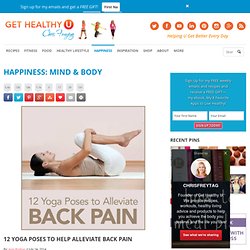 Back pain affects all ages and sadly, 85 percent of the U.S. population suffers from back pain. It’s the second most common reason for seeing a doctor in the United States followed by coughs and other respiratory infections. Back pain is the third most common reason for surgery and get this, failed back surgery syndrome is seen in 10-40 percent of patients who undergo back surgery. Start with some deep breathing exercises in and out of the nose called pranayama. 1. Start on the hands and knees and sit hips back towards the heels. Child’s Pose 2. From child’s pose rise up to hands and knees.

Cat Cow 3. Come on to the balls of the feet and lift the hips up, then release the heels down toward the mat. Down Dog 4. This poses gets into the hips which can significantly impact the back. Kneeling Lunge Right. Yoga Sequence For Tight Hips. 3 Ways Yoga Helps Defeat Anxiety. Anxiety has taken many peaceful mornings from me. 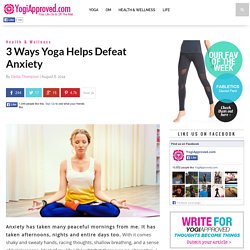 It has taken afternoons, nights and entire days too. With it comes shaky and sweaty hands, racing thoughts, shallow breathing, and a sense of helplessness. Most of my life I thought that there was no alternative. I spent years trying to find a way to manage my anxiety. I found things that helped a little, but nothing truly took me to a new way of being until I found yoga. So, what exactly is it about yoga that helps anxiety? 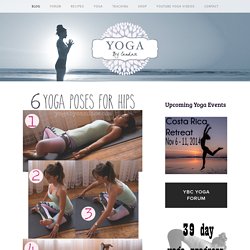 We just launched The Yoga Forum! Come join in, where we discuss everything from hip openers to hip hop! If you're someone whose job requires sitting for long periods of time, this sequence might just be your new favorite thing. All six of these yoga poses will help to gently open the hips, which may release tension in the low back and legs. Anyone up for a little lunch break yoga? Pilates-and-lyme-disease.pdf.