"Some of my ghosts are planets." Kapetyn b – Another One Bites the Interstellar Dust. Zeta2 Reticuli b. Albertus alauda. Scientists just made a planet disappear.

According to a new study, Alpha Centauri Bb, a world in the nearest star system to us, was merely a ghost in the data. 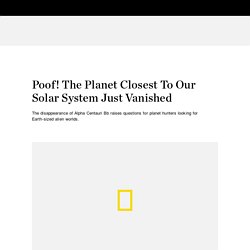 The planet, thought to be perhaps similar in mass to Earth, was hailed as a “landmark” when it was announced in 2012 in the journal Nature. The discovery got people excited about finding neighboring worlds that might harbor life in the Alpha Centauri system 4.3 light-years away—already home to science fiction characters such as the Transformers and the creatures of Avatar. This particular alien world wouldn't have been a good place to look for life, though. It would have been roughly a tenth the distance to its star that Mercury is to the sun, with a scorchingly hot surface probably covered in molten rock. Now it will serve as a cautionary tale for planet hunters, a reminder that planets as small as Earth are hard to find. Skeuomorphic map of mars. It’s hard to believe it’s been over a year since the last time I posted something on this blog! 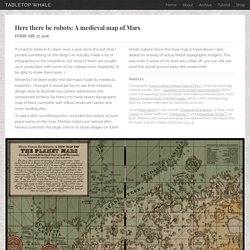 I’ve actually made a lot of infographics in the meantime, but most of them are caught up in production with some of my collaborators. Hopefully I’ll be able to share them soon :) 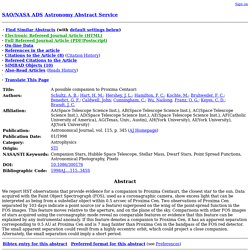 Data acquired with the Faint Object Spectrograph (FOS), used as a coronagraphic camera, show excess light that can be interpreted as being from a substellar object within 0.5 arcsec of Proxima Cen. Fictional planets of the Solar System. The fictional portrayal of our Solar System has often included planets, moons, and other celestial objects which do not actually exist in reality. 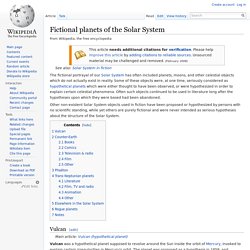 Some of these objects were, at one time, seriously considered as hypothetical planets which were either thought to have been observed, or were hypothesized in order to explain certain celestial phenomena. Often such objects continued to be used in literature long after the hypotheses upon which they were based had been abandoned. Other non-existent Solar System objects used in fiction have been proposed or hypothesized by persons with no scientific standing, while yet others are purely fictional and were never intended as serious hypotheses about the structure of the Solar System. Vulcan[edit] Counter-Earth[edit] Nibiru. Linked to the close of the Mayan calendar, a variety of rumors have spread regarding ways the world could end in 2012.

One popular contender is Nibiru, a supposed planet that some claim will collide with Earth at the end of the year. 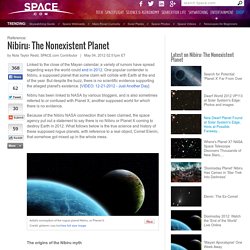 But despite the buzz, there is no scientific evidence supporting the alleged planet's existence. Lalande 21185. And in our solar system. Ci 2354. Luyten's Star.

Zarmina's world. Gliese 581g is an extra-solar planet candidate within a system that is only 20 light-years from Earth. 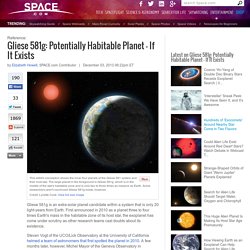 First announced in 2010 as a planet three to four times Earth's mass in the habitable zone of its host star, the exoplanet has come under scrutiny as other research teams cast doubts about its existence. Steven Vogt of the UCO/Lick Observatory at the University of California helmed a team of astronomers that first spotted the planet in 2010. A few months later, however, Michel Mayor of the Geneva Observatory in Switzerland led another group that was unable to find evidence of the planet. Two follow-up studies reached similar conclusions. In 2012, however, Vogt's group published another paper defending their results and casting doubts on the Swiss team's methods. 61 Cygni. 61 Cygni was christened the "Flying Star" in 1792 by Giuseppe Piazzi (1746-1826) for its unusually large proper motion.

When Hal Clement devised his planet Mesklin after the discovered wobble at the star 61 Cygni indicated one that size might exist, he chose for novelistic purposes to make it a solid body--larger than Jupiter--instead of (as he doubtless knew) the gas giant it probably had to be. I want to write about an imaginary satellite of the 70 Virginis planet, only at the nearer inaccurate distance it was first described to be, even though it is my own disproof that such a temperate world can be there. THIS--is my PoMo twist. But for all the rest, i want to follow scientific probability exactly. (Xv. 6/24/03) – graywyvern 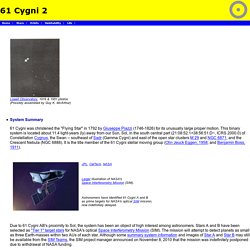 It is the title member of the 61 Cygni stellar moving group (Olin Jeuck Eggen, 1958; and Benjamin Boss, 1911). JPL, CalTech, NASA Larger illustration of NASA's Space Interferometry Mission (SIM). Astronomers have identified 61 Cygni A and B as prime targets for NASA's optical SIM mission, now indefinitely delayed. Due to 61 Cygni AB's proximity to Sol, the system has been an object of high interest among astronomers. . © Torben Krogh & Mogens Winther, (Amtsgymnasiet and EUC Syd Gallery, student photo used with permission) Barnard's star. Our corner of the universe just got a little bit lonelier.

This article reprints a newspaper story from 1963: – graywyvern

"Van de Kamp's Planet" except that there was more than one after he looked a little longer, & of course he went on to claim further planet detections. – graywyvern

Wikimedia Commons Take a look at the picture at the top of this page. 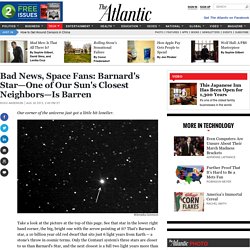 See that star in the lower right hand corner, the big, bright one with the arrow pointing at it? That's Barnard's star, a 10 billion year old red dwarf that sits just 6 light years from Earth -- a stone's throw in cosmic terms. 70 Ophiuchi. 70 Ophiuchi is a binary star system located 16.6 light years away from the Earth.

More: ...(the stars have been described as "pale topaz and violet")... – graywyvern

It is in the constellation Ophiuchus. 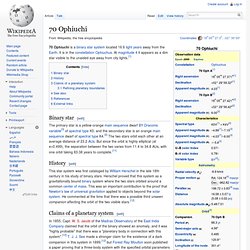 At magnitude 4 it appears as a dim star visible to the unaided eye away from city lights.[1] Binary star[edit] The primary star is a yellow-orange main sequence dwarf BY Draconis variable[3] of spectral type K0, and the secondary star is an orange main sequence dwarf of spectral type K4.[2] The two stars orbit each other at an average distance of 23.2 AUs.