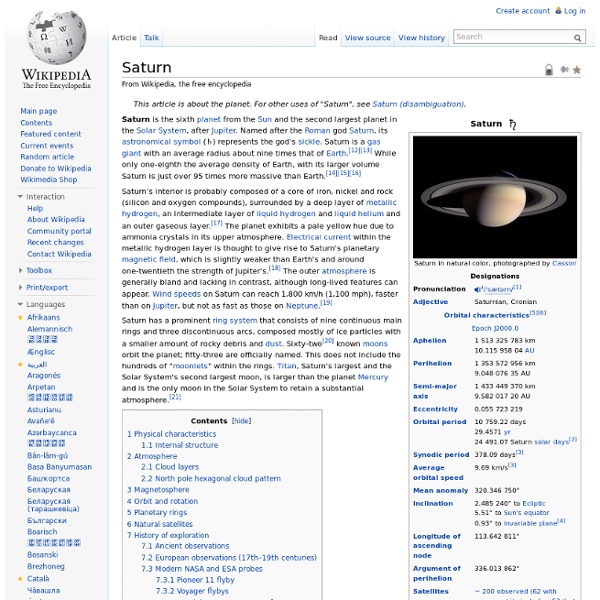 Saturn's interior is probably composed of a core of iron, nickel and rock (silicon and oxygen compounds), surrounded by a deep layer of metallic hydrogen, an intermediate layer of liquid hydrogen and liquid helium and an outer gaseous layer.[15] The planet exhibits a pale yellow hue due to ammonia crystals in its upper atmosphere. Electrical current within the metallic hydrogen layer is thought to give rise to Saturn's planetary magnetic field, which is weaker than Earth's magnetic field but has a magnetic moment 580 times that of the Earth due to Saturn's larger body radius. Saturn's magnetic field strength is around one-twentieth the strength of Jupiter's.[16] The outer atmosphere is generally bland and lacking in contrast, although long-lived features can appear. Physical characteristics Composite image roughly comparing the sizes of Saturn and Earth Internal structure Saturn is termed a gas giant, but it is not entirely gaseous. Atmosphere Cloud layers North pole hexagonal cloud pattern

Uranus Uranus is the seventh planet from the Sun. It has the third-largest planetary radius and fourth-largest planetary mass in the Solar System. Uranus is similar in composition to Neptune, and both are of different chemical composition than the larger gas giants Jupiter and Saturn. It is the only planet whose name is derived from a figure from Greek mythology rather than Roman mythology like the other planets, from the Latinized version of the Greek god of the sky, Ouranos. History Though it is visible to the naked eye like the five classical planets, it was never recognized as a planet by ancient observers because of its dimness and slow orbit.[18] Sir William Herschel announced its discovery on March 13, 1781, expanding the known boundaries of the Solar System for the first time in history. Discovery The power I had on when I first saw the comet was 227. Although Herschel continued to cautiously describe his new object as a comet, other astronomers had already begun to suspect otherwise.

Mercury (planet) Mercury is gravitationally locked and rotates in a way that is unique in the Solar System. As seen relative to the fixed stars, it rotates exactly three times for every two revolutions[b] it makes around its orbit.[13] As seen from the Sun, in a frame of reference that rotates with the orbital motion, it appears to rotate only once every two Mercurian years. An observer on Mercury would therefore see only one day every two years. Because Mercury's orbit lies within Earth's orbit (as does Venus's), it can appear in Earth's sky in the morning or the evening, but not in the middle of the night. Also, like Venus and the Moon, it displays a complete range of phases as it moves around its orbit relative to Earth. Internal structure Internal structure of Mercury: 1. Mercury's density can be used to infer details of its inner structure. Mercury's core has a higher iron content than that of any other major planet in the Solar System, and several theories have been proposed to explain this. Plains

Rings of Saturn Simulated image using color to present radio occultation-derived information on particle sizes. Radio signals of 0.94, 3.6, and 13 cm wavelengths were sent from Cassini through the rings to Earth. The attenuation of each signal reflects the abundance of particles of sizes similar to the wavelength and larger. Purple (much of the B Ring and the inner A ring) indicates few particles smaller than 5 cm are present, i.e., similar attenuation of all signals. The rings have numerous gaps where particle density drops sharply: two opened by known moons embedded within them, and many others at locations of known destabilizing orbital resonances with Saturn's moons. History[edit] Galileo's work[edit] Galileo first observed the rings in 1610. Early astronomers used anagrams as a form of commitment scheme to lay claim to new discoveries before their results were ready for publication. Ring theory and observations[edit] Physical characteristics[edit] Formation of main rings[edit]

Neptune Neptune is similar in composition to Uranus, and both have compositions which differ from those of the larger gas giants, Jupiter, and Saturn. Neptune's atmosphere, while similar to Jupiter's and Saturn's in that it is composed primarily of hydrogen and helium, along with traces of hydrocarbons and possibly nitrogen, contains a higher proportion of "ices" such as water, ammonia, and methane. Astronomers sometimes categorise Uranus and Neptune as "ice giants" in order to emphasise these distinctions.[10] The interior of Neptune, like that of Uranus, is primarily composed of ices and rock.[11] It is possible that the core has a solid surface, but the temperature would be thousands of degrees and the atmospheric pressure crushing.[12] Traces of methane in the outermost regions in part account for the planet's blue appearance.[13] In contrast to the hazy, relatively featureless atmosphere of Uranus, Neptune's atmosphere is notable for its active and visible weather patterns. History Naming

Jupiter Structure Jupiter is composed primarily of gaseous and liquid matter. It is the largest of four gas giants as well as the largest planet in the Solar System with a diameter of 142,984 km (88,846 mi) at its equator. The density of Jupiter, 1.326 g/cm3, is the second highest of the gas giants, but lower than for any of the four terrestrial planets. Composition Jupiter's upper atmosphere is composed of about 88–92% hydrogen and 8–12% helium by percent volume or fraction of gas molecules. Based on spectroscopy, Saturn is thought to be similar in composition to Jupiter, but the other gas giants Uranus and Neptune have relatively much less hydrogen and helium.[21] Because of the lack of atmospheric entry probes, high-quality abundance numbers of the heavier elements are lacking for the outer planets beyond Jupiter. Mass Jupiter's diameter is one order of magnitude smaller (×0.10045) than the Sun, and one order of magnitude larger (×10.9733) than the Earth. Internal structure Atmosphere Cloud layers

True Saturn True Saturn Date: 6 Oct 2004 While cruising around Saturn in early October 2004, Cassini captured a series of images that have been composed into this large global natural color view of Saturn and its rings. This grand mosaic consists of 126 images acquired in a tile-like fashion, covering one end of Saturn's rings to the other and the entire planet in between. Three images (red, green and blue) were taken of each of the 42 locations, or "footprints," across the planet. The smallest features seen here are 38 km (24 miles) across. The sun-Saturn-Cassini, or phase, angle at the time was 72 degrees; hence, the partial illumination of Saturn in this portrait.

Mars Animation of Mars' rotation from the vantage of an observer who moves south, then north, to hover over both poles, showing the planet's major topographic features. Mars is currently host to five functioning spacecraft: three in orbit – the Mars Odyssey, Mars Express, and Mars Reconnaissance Orbiter – and two on the surface – Mars Exploration Rover Opportunity and the Mars Science Laboratory Curiosity. Defunct spacecraft on the surface include MER-A Spirit and several other inert landers and rovers such as the Phoenix lander, which completed its mission in 2008. Observations by the Mars Reconnaissance Orbiter have revealed possible flowing water during the warmest months on Mars.[25] In 2013, NASA's Curiosity rover discovered that Mars' soil contains between 1.5% and 3% water by mass (about two pints of water per cubic foot or 33 liters per cubic meter, albeit attached to other compounds and thus not freely accessible).[26] Physical characteristics Size comparison of Earth and Mars. Soil

Earth Earth is the third planet from the Sun. It is the densest and fifth-largest of the eight planets in the Solar System. It is also the largest of the Solar System's four terrestrial planets. It is sometimes referred to as the world or the Blue Planet.[23] Earth formed approximately 4.54 billion years ago, and life appeared on its surface within its first billion years.[24] Earth's biosphere then significantly altered the atmospheric and other basic physical conditions, which enabled the proliferation of organisms as well as the formation of the ozone layer, which together with Earth's magnetic field blocked harmful solar radiation, and permitted formerly ocean-confined life to move safely to land.[25] The physical properties of the Earth, as well as its geological history and orbit, have allowed life to persist. Name and etymology In general English usage, the name earth can be capitalized or spelled in lowercase interchangeably, either when used absolutely or prefixed with "the" (i.e. Heat

Space Science - Saturn and Titan Saturn and Titan, side by side Saturn and Titan 5 March 2012 Titan, Saturn’s largest moon at 5150 km across, looks small here, pictured to the right of the gas giant in this infrared image taken by the Cassini spacecraft. Saturn’s rings appear across the top of the image, casting shadows onto the planet across the middle of the image. A much smaller moon, Prometheus, 86 km across, appears as a tiny white speck above the rings in the far upper right of the image. The shadow of another moon, Pandora, 100 km at its widest, can be seen below the ring shadows towards the right side of the planet. Cassini’s wide-angle camera captured the view on 5 January, while it was about 685 000 km from Saturn.

Venus Venus is a terrestrial planet and is sometimes called Earth's "sister planet" because of their similar size, gravity, and bulk composition (Venus is both the closest planet to Earth and the planet closest in size to Earth). However, it has also been shown to be very different from Earth in other respects. It has the densest atmosphere of the four terrestrial planets, consisting of more than 96% carbon dioxide. The atmospheric pressure at the planet's surface is 92 times that of Earth's. With a mean surface temperature of 735 K (462 °C; 863 °F), Venus is by far the hottest planet in the Solar System. It has no carbon cycle to lock carbon back into rocks and surface features, nor does it seem to have any organic life to absorb it in biomass. Physical characteristics Venus is one of the four terrestrial planets in the Solar System, meaning that, like Earth, it is a rocky body. Geography The longitudes of physical features on Venus are expressed relative to its prime meridian.

Venus Venus is a terrestrial planet and is sometimes called Earth's "sister planet" because of their similar size, gravity, and bulk composition (Venus is both the closest planet to Earth and the planet closest in size to Earth). However, it has also been shown to be very different from Earth in other respects. It has the densest atmosphere of the four terrestrial planets, consisting of more than 96% carbon dioxide. The atmospheric pressure at the planet's surface is 92 times that of Earth's. With a mean surface temperature of 735 K (462 °C; 863 °F), Venus is by far the hottest planet in the Solar System. It has no carbon cycle to lock carbon back into rocks and surface features, nor does it seem to have any organic life to absorb it in biomass. Physical characteristics Venus is one of the four terrestrial planets in the Solar System, meaning that, like Earth, it is a rocky body. Geography The longitudes of physical features on Venus are expressed relative to its prime meridian.