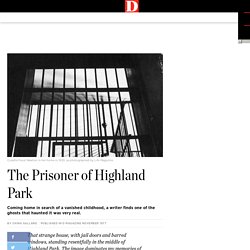 The image dominates my memories of Dallas and my early life. We all have to go home again, we are told, at one time or in one way. Much of our exploring is a journey to arrive at the place where we started and to know it for the first time. So when I returned home to search out the story of Cosette Faust Newton and her dream home turned prison, I found the beginning of my own story within hers. I found memories which inevitably connected with Turtle Creek: sitting by it, wading, catching crawdads with bacon and strings tied by my grandmother, climbing in the native cedars and pines that grew along its banks. Sidewalks and Skeletons.

They made 200 copies on vinyl, released in july '18 but sold out now – graywyvern

"If we could recover the uncompromising spirit of one's youth, one's greatest indignation would be for what one has become." --The Counterfeiters – graywyvern

Dallas gothic 3b. (part 2) Which suited me fine, & the others there. 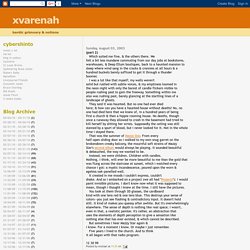 We felt a bit less mundane commuting from our day jobs at bookstores, warehouses, & Deep Ellum boutiques, back to a haunted mansion to sleep where wind sang in the cracks & crannies at all hours & a hundred buckets barely sufficed to get it through a thunder boomer. I was a lot like that myself; my walls weren't solid but rustled with subtle voices, & my emptiness loomed in the neon night with only the barest of candle flickers visible to people rushing past to gain the freeway. Dallas gothic 3a. (part 1)I wrote this for a radio contest (the first & last sentences were given): "Portrait in Cobwebs" Dallas can be a funny place sometimes: the lights, the viaducts at night with a solitary walker; from the air it can look quite magical. 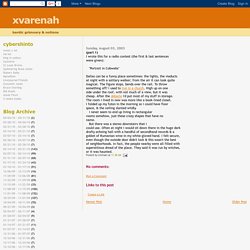 The figure stops, bends over the rail. To throw something off? I used to live in a church. D'ksuban mini-dictionary. Dallas Gothic 2. Dallas Gothic.

The only poem i have been able to find by a Dallas poet contemporaneous with the Kennedy Assassination: "The Spell You can almost see him, looking as if well, Shedding it, shaking it off, The least shadow on the shoulders Marking the hurt--as if absorbed almost; Then the face turning, alive-- Only hesitating momentarily-- Until you remember how the head Was horribly shattered And fell, with the lifted hair, As from an ax in back--Oswald Cutting a path for himself In the midst of America, a wedge; But was the thing as it sped, Coppered, leaden, not stopped Perhaps there in the invincible thick hair? Where the woman with her skill Could pick it away, in her lap, Breaking the spell? in the cloth of her dress-- It was deeper than that; Neither burr nor dune thistle, Nor like the roses she held Black as blood in the light, so dark red-- But a kind of blunt bud, splintered Into flower, that could not be touched, Having its own final force that spread throughout, The blind dark overwhelming him." William Burford, A Beginning (1966) (via Xvarenah blog, 5/7/03) – graywyvern

Alphabet adventures, or: the truth about runes. Fushitsusha. Once upon a time, a record company was a brand of distinction — you could pick up a Motown record and know to a high degree that you were going to get not just a certain kind of sound (or soul), but you’d be picking up something that was highly reflective of a given person’s taste. 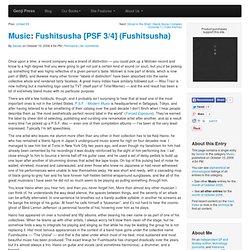 Motown is now part of Arista, which is now part of BMG, and likewise many other former “labels of distinction” have been absorbed into the same collective whole and rendered fairly faceless. A great many indies have similarly followed suit — Wax Trax! Is now nothing but a marketing logo used by TVT (itself part of Time/Warner) — and the end result has been a lot of extremely bland music with no particular purpose. There are still a few holdouts, though, and it probably isn’t surprising to hear that at least one of the most important ones is not in the United States. You know Haino when you hear him, and then you never forget him. I don’t listen to 3/4 very often. Tags: Fushitsusha Keiji Haino PSF. Custom fezler.

Infrared. Advertisement One of the most charming contrasting color effects you can get in photography is by using infrared. 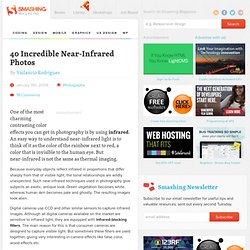 An easy way to understand near-infrared light is to think of it as the color of the rainbow next to red, a color that is invisible to the human eye. But near-infrared is not the same as thermal imaging. Because everyday objects reflect infrared in proportions that differ sharply from that of visible light, the tonal relationships are wildly unexpected. Such near-infrared techniques used in photography give subjects an exotic, antique look. Digital cameras use CCD and other similar sensors to capture infrared images. To start with infrared photography, all you need to have is A digital camera that is sensitive to infrared light.A visible-light blocking filter (e.g. a Wratten 89B filter)Image-editing software, such as Photoshop. Near-infrared images straight out of the camera do not always look good and are usually not as dramatic and beautiful as normally captured images. 18mm.