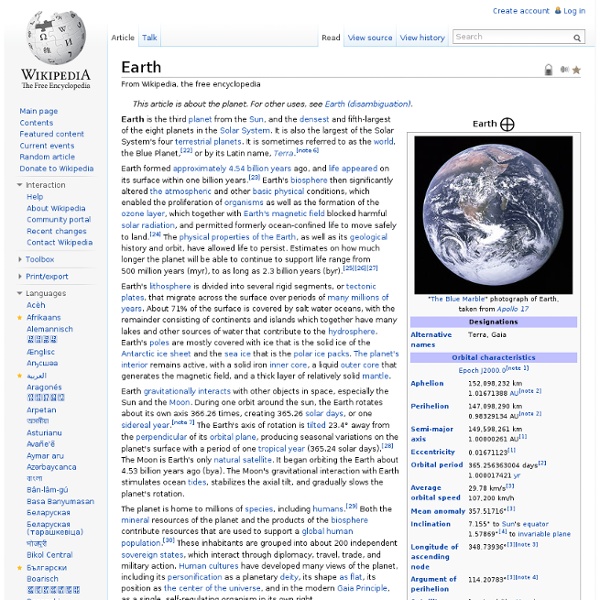 Earth is the third planet from the Sun. It is the densest and fifth-largest of the eight planets in the Solar System. It is also the largest of the Solar System's four terrestrial planets. It is sometimes referred to as the world or the Blue Planet.[23] Earth formed approximately 4.54 billion years ago, and life appeared on its surface within its first billion years.[24] Earth's biosphere then significantly altered the atmospheric and other basic physical conditions, which enabled the proliferation of organisms as well as the formation of the ozone layer, which together with Earth's magnetic field blocked harmful solar radiation, and permitted formerly ocean-confined life to move safely to land.[25] The physical properties of the Earth, as well as its geological history and orbit, have allowed life to persist. Name and etymology In general English usage, the name earth can be capitalized or spelled in lowercase interchangeably, either when used absolutely or prefixed with "the" (i.e. Heat

The Secret Knowledge of The Ancients Number Nine Code 911 The number 9 is the last number in a base 10 system which is the last and limit of all that is. Nine is a number which has many interesting qualities that other numbers do not have and has been used to hold a hidden code that affects every person on earth. If you think nine is just another number, you are in for a big surprise. The number 9 is very interesting and suspect looking like an upside down 6. Even more interesting, there is something about it that most people and scientists don't know. Structure of the Earth Introduction The Earth is an oblate spheroid. It is composed of a number of different layers as determined by deep drilling and seismic evidence (Figure 1). These layers are: The core, which is approximately 7,000 kilometers in diameter (3,500 kilometers in radius) and is located at the Earth's center. The mantle, which surrounds the core and has a thickness of 2,900 kilometers.

An Introduction to the Layers of the Earth by Jason Westley Jason Westley's image for: "An Introduction to the Layers of the Earth" Caption: Astrological age There are two broad approaches about the effects upon the world due to the astrological ages. Some astrologers believe the changes upon Earth are caused and marked by the influences of the given astrological sign, associated with the Age, while other astrologers do not follow the causative model and believe it is a matter of synchronicity.[3] Many astrologers believe that the Age of Aquarius has arrived recently or will arrive in the near future. On the other hand, some believe that the Age of Aquarius arrived up to five centuries ago, or will not start until six centuries from now.[4] Despite all references provided by various sources, astrologers cannot agree upon exact dates for the beginning or ending of the ages. Various ages are described below, such as the Age of Aquarius. Overview[edit]

core Earth’s core is the very hot center of our planet. The Earth has three major layers. All known life exists on the solid outer layer, called the crust. Beneath the crust is the mantle, a gooey, hot layer of magma and other semi-solid rocks and minerals. Movement in the mantle leads to tectonic activity, such as volcanic eruptions and earthquakes, on the crust. The core, beneath the mantle, is the deepest and hottest layer of the Earth.

The Most Distant, Dark Galaxy Ever Found! : Starts With A Bang “One mustn’t look at the abyss, because there is at the bottom an inexpressible charm which attracts us.” -Gustave Flaubert The deepest depths of space, out beyond our atmosphere, our Solar System, and even our galaxy, hold the richness of the great Universe beyond. Stretching for billions of light years in every direction, there are structures large and small, dense and sparse, everywhere we’ve ever dared to look. Image credit: R. magma Magma is molten, liquid rock found under the surface of the Earth. Magma can also contain crystals, rock fragments and dissolved gases. The liquid part of magma is called the melt.

Quark A quark (/ˈkwɔrk/ or /ˈkwɑrk/) is an elementary particle and a fundamental constituent of matter. Quarks combine to form composite particles called hadrons, the most stable of which are protons and neutrons, the components of atomic nuclei.[1] Due to a phenomenon known as color confinement, quarks are never directly observed or found in isolation; they can be found only within hadrons, such as baryons (of which protons and neutrons are examples), and mesons.[2][3] For this reason, much of what is known about quarks has been drawn from observations of the hadrons themselves. The quark model was independently proposed by physicists Murray Gell-Mann and George Zweig in 1964.[5] Quarks were introduced as parts of an ordering scheme for hadrons, and there was little evidence for their physical existence until deep inelastic scattering experiments at the Stanford Linear Accelerator Center in 1968.[6][7] Accelerator experiments have provided evidence for all six flavors. Classification[edit]

Supernova A supernova (abbreviated SN, plural SNe after "supernovae") is a stellar explosion that is more energetic than a nova. It is pronounced /ˌsuːpəˈnoʊvə/ with the plural supernovae /ˌsuːpəˈnoʊviː/ or supernovas. Supernovae are extremely luminous and cause a burst of radiation that often briefly outshines an entire galaxy, before fading from view over several weeks or months. Gamma-ray burst Artist's illustration showing the life of a massive star as nuclear fusion converts lighter elements into heavier ones. When fusion no longer generates enough pressure to counteract gravity, the star rapidly collapses to form a black hole. Theoretically, energy may be released during the collapse along the axis of rotation to form a gamma-ray burst. Gamma-ray bursts (GRBs) are flashes of gamma rays associated with extremely energetic explosions that have been observed in distant galaxies. They are the brightest electromagnetic events known to occur in the universe.[1] Bursts can last from ten milliseconds to several minutes. The initial burst is usually followed by a longer-lived "afterglow" emitted at longer wavelengths (X-ray, ultraviolet, optical, infrared, microwave and radio).[2]

Hypernova Eta Carinae, in the constellation of Carina, one of the nearer candidates for a future hypernova A hypernova (pl. hypernovae) is a type of supernova explosion with an energy substantially higher than that of standard supernovae. An alternative term for most hypernovae is "superluminous supernovae" (SLSNe). Such explosions are believed to be the origin of long-duration gamma-ray bursts.[1] Just like supernovae in general, hypernovae are produced by several different types of stellar explosion: some well modelled and observed in recent years, some still tentatively suggested for observed hypernovae, and some entirely theoretical. Numerous hypernovae have been observed corresponding to supernovae type Ic and type IIn, and possibly also at least one of type IIb.[2]