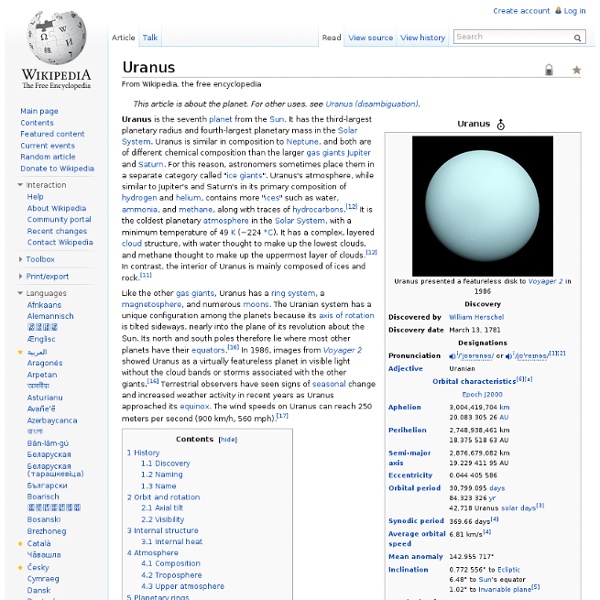 Uranus is the seventh planet from the Sun. It has the third-largest planetary radius and fourth-largest planetary mass in the Solar System. Uranus is similar in composition to Neptune, and both are of different chemical composition than the larger gas giants Jupiter and Saturn. For this reason, astronomers sometimes place them in a separate category called "ice giants". It is the only planet whose name is derived from a figure from Greek mythology rather than Roman mythology like the other planets, from the Latinized version of the Greek god of the sky, Ouranos. History Though it is visible to the naked eye like the five classical planets, it was never recognized as a planet by ancient observers because of its dimness and slow orbit.[18] Sir William Herschel announced its discovery on March 13, 1781, expanding the known boundaries of the Solar System for the first time in history. Discovery The power I had on when I first saw the comet was 227. Naming Name Orbit and rotation Axial tilt

Venus Venus is a terrestrial planet and is sometimes called Earth's "sister planet" because of their similar size, gravity, and bulk composition (Venus is both the closest planet to Earth and the planet closest in size to Earth). However, it has also been shown to be very different from Earth in other respects. It has the densest atmosphere of the four terrestrial planets, consisting of more than 96% carbon dioxide. Physical characteristics Venus is one of the four terrestrial planets in the Solar System, meaning that, like Earth, it is a rocky body. Geography The Venusian surface was a subject of speculation until some of its secrets were revealed by planetary science in the 20th century. About 80% of the Venusian surface is covered by smooth, volcanic plains, consisting of 70% plains with wrinkle ridges and 10% smooth or lobate plains.[21] Two highland "continents" make up the rest of its surface area, one lying in the planet's northern hemisphere and the other just south of the equator.

Deimos Deimos was discovered by Asaph Hall, Sr. at the United States Naval Observatory in Washington, D.C on 12 August 1877, at about 07:48 UTC (given in contemporary sources as "11 August 14:40" Washington mean time, using an astronomical convention of beginning a day at noon, so 12 hours must be added to get the actual local mean time).[9][10][11][12] Hall also discovered Phobos on 18 August 1877, at about 09:14 GMT, after deliberately searching for Martian moons. It has an escape velocity of 5.6 m/s[3] and apparent magnitude of 12.45.[4] Only two geological features on Deimos have been given names. Deimos's orbit is nearly circular and is close to Mars's equatorial plane. Unlike Phobos, which orbits so fast that it actually rises in the west and sets in the east, Deimos rises in the east and sets in the west. Because Deimos's orbit is relatively close to Mars and has only a very small inclination to Mars's equator, it cannot be seen from Martian latitudes greater than 82.7°.

Pluto In 2015, the Pluto system is due to be visited by spacecraft for the first time. The New Horizons probe will perform a flyby during which it will attempt to take detailed measurements and images of the plutoid and its moons. Discovery Discovery photographs of Pluto In the 1840s, using Newtonian mechanics, Urbain Le Verrier predicted the position of the then-undiscovered planet Neptune after analysing perturbations in the orbit of Uranus. In 1906, Percival Lowell, a wealthy Bostonian who had founded the Lowell Observatory in Flagstaff, Arizona in 1894, started an extensive project in search of a possible ninth planet, which he termed "Planet X".[25] By 1909, Lowell and William H. Tombaugh's task was to systematically image the night sky in pairs of photographs taken two weeks apart, then examine each pair and determine whether any objects had shifted position. Name The discovery made headlines across the globe. ), but has a circle in place of the middle prong of the trident ( Other factors

Earth Earth is the third planet from the Sun. It is the densest and fifth-largest of the eight planets in the Solar System. It is also the largest of the Solar System's four terrestrial planets. Earth formed approximately 4.54 billion years ago, and life appeared on its surface within its first billion years.[24] Earth's biosphere then significantly altered the atmospheric and other basic physical conditions, which enabled the proliferation of organisms as well as the formation of the ozone layer, which together with Earth's magnetic field blocked harmful solar radiation, and permitted formerly ocean-confined life to move safely to land.[25] The physical properties of the Earth, as well as its geological history and orbit, have allowed life to persist. Name and etymology The modern English noun earth developed from Middle English erthe (recorded in 1137), itself from Old English eorthe (dating from before 725), deriving from Proto-Germanic *erthō. Composition and structure Shape Heat Surface

Jupiter Structure Jupiter is composed primarily of gaseous and liquid matter. It is the largest of four gas giants as well as the largest planet in the Solar System with a diameter of 142,984 km (88,846 mi) at its equator. The density of Jupiter, 1.326 g/cm3, is the second highest of the gas giants, but lower than for any of the four terrestrial planets. Composition Jupiter's upper atmosphere is composed of about 88–92% hydrogen and 8–12% helium by percent volume or fraction of gas molecules. Based on spectroscopy, Saturn is thought to be similar in composition to Jupiter, but the other gas giants Uranus and Neptune have relatively much less hydrogen and helium.[21] Because of the lack of atmospheric entry probes, high-quality abundance numbers of the heavier elements are lacking for the outer planets beyond Jupiter. Mass Jupiter's diameter is one order of magnitude smaller (×0.10045) than the Sun, and one order of magnitude larger (×10.9733) than the Earth. Internal structure Atmosphere Cloud layers

Mars Animation of Mars' rotation from the vantage of an observer who moves south, then north, to hover over both poles, showing the planet's major topographic features. Mars is currently host to five functioning spacecraft: three in orbit – the Mars Odyssey, Mars Express, and Mars Reconnaissance Orbiter – and two on the surface – Mars Exploration Rover Opportunity and the Mars Science Laboratory Curiosity. Defunct spacecraft on the surface include MER-A Spirit and several other inert landers and rovers such as the Phoenix lander, which completed its mission in 2008. Observations by the Mars Reconnaissance Orbiter have revealed possible flowing water during the warmest months on Mars.[25] In 2013, NASA's Curiosity rover discovered that Mars' soil contains between 1.5% and 3% water by mass (about two pints of water per cubic foot or 33 liters per cubic meter, albeit attached to other compounds and thus not freely accessible).[26] Physical characteristics Size comparison of Earth and Mars. Soil

Asteriod Belt The asteroid belt (shown in white) is located between the orbits of Mars and Jupiter. History of observation[edit] In an anonymous footnote to his 1766 translation of Charles Bonnet's Contemplation de la Nature,[8] the astronomer Johann Daniel Titius of Wittenberg[9][10] noted an apparent pattern in the layout of the planets. If one began a numerical sequence at 0, then included 3, 6, 12, 24, 48, etc., doubling each time, and added four to each number and divided by 10, this produced a remarkably close approximation to the radii of the orbits of the known planets as measured in astronomical units. This pattern, now known as the Titius–Bode law, predicted the semi-major axes of the six planets of the time (Mercury, Venus, Earth, Mars, Jupiter and Saturn) provided one allowed for a "gap" between the orbits of Mars and Jupiter. Neither the appellation of planets, nor that of comets, can with any propriety of language be given to these two stars ... Origin[edit] Formation[edit] Evolution[edit]

Mercury Mercury is gravitationally locked and rotates in a way that is unique in the Solar System. As seen relative to the fixed stars, it rotates exactly three times for every two revolutions[b] it makes around its orbit.[13] As seen from the Sun, in a frame of reference that rotates with the orbital motion, it appears to rotate only once every two Mercurian years. An observer on Mercury would therefore see only one day every two years. Because Mercury's orbit lies within Earth's orbit (as does Venus's), it can appear in Earth's sky in the morning or the evening, but not in the middle of the night. Also, like Venus and the Moon, it displays a complete range of phases as it moves around its orbit relative to Earth. Although Mercury can appear as a very bright object when viewed from Earth, its proximity to the Sun makes it more difficult to see than Venus. Internal structure Internal structure of Mercury: 1. Mercury's density can be used to infer details of its inner structure. Surface geology

Phobos Phobos (systematic designation: Mars I) is the larger and closer of the two natural satellites of Mars. Both moons were discovered in 1877. Phobos has dimensions of 27 × 22 × 18 km,[1] and is too small to be rounded under its own gravity. Its surface area is slightly less than the land area of Delaware. Phobos does not have an atmosphere due to low mass and low gravity.[10] It is one of the least reflective bodies in the Solar System. Spectroscopically it appears to be similar to the D-type asteroids,[11] and is apparently of composition similar to carbonaceous chondrite material.[12] Phobos's density is too low to be solid rock, and it is known to have significant porosity.[13][14][15] These results led to the suggestion that Phobos might contain a substantial reservoir of ice. The unique Kaidun meteorite is thought to be a piece of Phobos, but this has been difficult to verify since little is known about the detailed composition of the moon.[25][26]