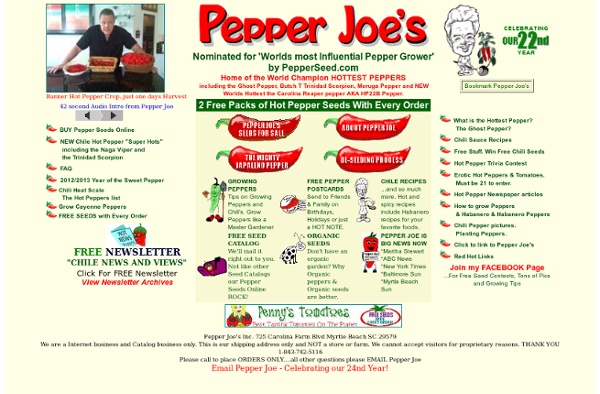 Naga Jolokia - World's Hottest Chile Pepper - Ghost Pepper Red Savina Habanero Ghost Pepper Naga Viper Trinidad Scorpion Moruga Scorpion The Naga Jolokia has been tested at over 1,001,300 Scoville heat units! Where did it come from? A pepper by any other name is still as HOT... Naga Jolokia is also called Bih Jolokia in some places of Assam (Bih = Poison, Jolokia = chile pepper; in Assamese). Naga Jolokias growing at Frontal Agritech Naga Jolokia, 1,041,427 Scoville units. In 2000, scientists at India's Defense Research Laboratory (DRL) reported a rating of 855,000 units on the Scoville scale, and in 2004 an Indian export company called Frontal Agritech obtained a rating of 1,041,427 Scoville units, which would mean a new world record, being over twice as hot as the Red Savina Habanero pepper and roughly equal to the similar-looking Dorset Naga, which is derived from the Naga Jolokia (C. chinese) a variety grown in West Bexington, Dorset, England. More about the Bhut Jolokia (PDF): Naturally Occurring Interspecific Hybridin Naga Viper Trinidad Scorpion

Wildfire Chilli - The one stop hot shop! Great Vegetable Seeds from The Real Seed Catalogue The Hottest Pepper, Buy Hot Pepper Seeds, Naga Jolokia - Bhut Jolokia Home, Buy Hottest Pepper in the World, Ghost Peppers,Trinidad Scorpion,World's Hottest Chili Emerald - Heirloom, Untreated, Open Pollinated, Vegetable Seeds - Sustainable Seed Company Emerald Okra (56 days) Introduced by Campbell's Soup If I remember correctly this was a Cajun cook's dream. My granny hailed from the great state of Louisiana and many a time I remember smelling fried okra wafting from the kitchen during a fish fry. You can easily fill a gumbo pot with the abundant pods from Emerald okra. This okra is an early variety that you CAN actually let grow out past 3" to about 8". Granny always picked 3-4" okra to cut up, be dipped in corn meal and fried to perfection in the cast iron skillet I now have. You guessed it! Recommended by the University of Florida Institute of Food and Agricultural Sciences. The Texas Cooperative Extension at Texas A&M recommends this variety for Texas! For those of you in the South where I come from you will have no problem growing okra, but if like me you now find yourself in an area with cool summers like the Pacific Northwest growing okra can be a tricky business.

World's Hottest Pepper: Trinidad Moruga Scorpion Proclaimed New Champion Chile ALBUQUERQUE, N.M. -- There are super-hot chile varieties. And then there's the sweat-inducing, tear-generating, mouth-on-fire Trinidad Moruga Scorpion. With a name like that, it's not surprising that months of research by the experts at New Mexico State University's Chile Pepper Institute have identified the variety as the new hottest pepper on the planet. The golf ball-sized pepper scored the highest among a handful of chile breeds reputed to be among the hottest in the world. "You take a bite. Researchers were pushed by hot sauce makers, seed producers and others in the spicy foods industry to establish the average heat levels for super-hot varieties in an effort to quash unscientific claims of which peppers are actually the hottest. That's something that hadn't been done before, Bosland said. "The question was, could the Chile Pepper Institute establish the benchmark for chile heat?" "The capsaicin kept penetrating the latex and soaking into the skin on our hands. Also on HuffPost: