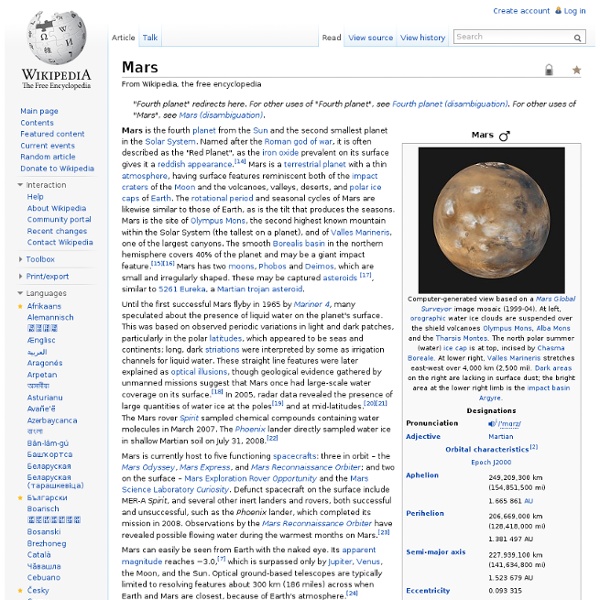 Animation of Mars' rotation from the vantage of an observer who moves south, then north, to hover over both poles, showing the planet's major topographic features. Mars is currently host to five functioning spacecraft: three in orbit – the Mars Odyssey, Mars Express, and Mars Reconnaissance Orbiter – and two on the surface – Mars Exploration Rover Opportunity and the Mars Science Laboratory Curiosity. Defunct spacecraft on the surface include MER-A Spirit and several other inert landers and rovers such as the Phoenix lander, which completed its mission in 2008. Mars can easily be seen from Earth with the naked eye, as can its reddish coloring. Physical characteristics Size comparison of Earth and Mars. Internal structure Surface geology During the Solar System's formation, Mars was created as the result of a stochastic process of run-away accretion out of the protoplanetary disk that orbited the Sun. This Mars rock revealed its bluish-gray interior to Mars Science Laboratory[40] Soil

Mars, Mars Information, Red Planet Facts, News, Photos The Red Planet Mars is a small rocky body once thought to be very Earthlike. Like the other terrestrial planets—Mercury, Venus, and Earth—its surface has been changed by volcanism, impacts from other bodies, movements of its crust, and atmospheric effects such as dust storms. It has polar ice caps that grow and recede with the change of seasons; areas of layered soils near the Martian poles suggest that the planet's climate has changed more than once, perhaps caused by a regular change in the planet's orbit. Martian tectonism, the formation and change of a planet's crust, differs from Earth's. Periodically, great dust storms engulf the entire planet. Water on Mars? Scientists believe that 3.5 billion years ago, Mars experienced the largest known floods in the solar system. At present, Mars is too cold and its atmosphere is too thin to allow liquid water to exist at the surface for long. Mountains, Moons, and More Mars also has two small moons, Phobos and Deimos. —Text courtesy NASA/JPL