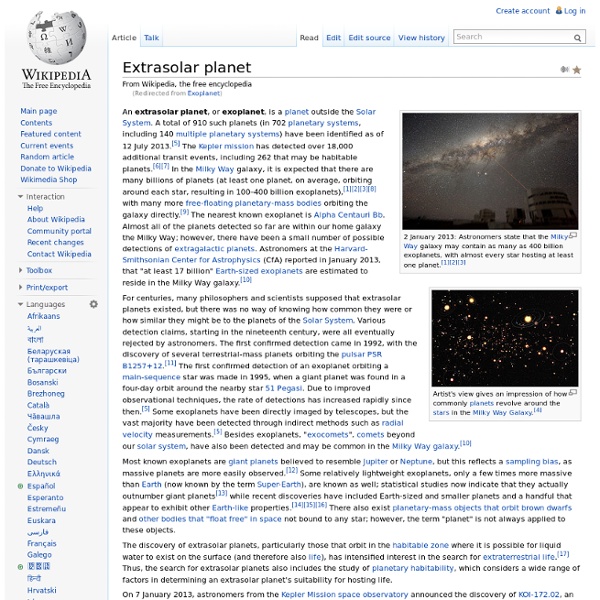 2 January 2013: Astronomers state that the Milky Way may contain as many as 400 billion exoplanets, with almost every star hosting at least one planet.[1][2][3] An exoplanet or extrasolar planet is a planet outside the Solar System. Around 1800 such planets have been discovered[5][6][7] (1783 planets in 1105 planetary systems including 460 multiple planetary systems as of 18 April 2014).[8] The nearest known exoplanet, if confirmed, would be Alpha Centauri Bb, but there is some doubt about its existence. For centuries philosophers and scientists supposed that extrasolar planets existed, but there was no way of detecting them or of knowing their frequency or how similar they might be to the planets of the Solar System. The discovery of extrasolar planets has intensified interest in the search for extraterrestrial life, particularly for those that orbit in the host star's habitable zone where it is possible for liquid water (and therefore life) to exist on the surface. Direct imaging[edit] Related:  Exo-planets

Rich exoplanet system discovered 24 August 2010Last updated at 14:03 By Victoria Gill Science reporter, BBC News The researchers say the finding marks a new phase in the hunt for exoplanets Astronomers have discovered a planetary system containing at least five planets that orbit a star called HD 10180, which is much like our own Sun. The star is 127 light years away, in the southern constellation of Hydrus. The researchers used the European Southern Observatory (Eso) to monitor light emitted from the system and identify and characterise the planets. They say this is the "richest" system of exoplanets - planets outside our own Solar System - ever found. Christophe Lovis from Geneva University's observatory in Switzerland was lead researcher on the study. The discovery could provide insight into the formation of our own Solar System "This also highlights the fact that we are now entering a new era in exoplanet research - the study of complex planetary systems and not just of individual planets," he said. “Start Quote

Astronomers may have just discovered the first known free-floating planet There isn't any reason this object wouldn't or couldn't have satellites of its own; and probably does. Earth has 1-6 moons at any given time, but we don't really notice them because they're small and interloping. Here, experiment: Sadly there is no way to intelligently answer those questions at this time beyond "Well, we do not know of any reason either of those things should be impossible, but we do not know anything about what would make that possible either." We simply have no empirical evidence to work with here except for what we can observe in our own solar system, and we have absolutely no way to know whether what we observe here could be considered "typical" or whether our system represents some extreme abberration... or even whether the interactions which govern stellar/planetary formation allow for the word "typical" to have any meaning whatsoever. So what you're saying is "Maybe, maybe not"? Wait, 1 to 6 moons?

Unprecedented: Amateur astronomers discover a planet with four suns False. At least in understanding, suns can be anywhere, Sol is the name of the star we orbit. Take your innacurate indignation elsewhere I thought we were in the Sol system? From what I've observed, a 'sun' is a title we give a star in relation to objects in its system, such as how we call large satellites 'moons'. I think it's more about point of view. Had the title read "solar system with four suns", I might not disagree with you, but we're talking about a planet; that planet orbits four stars, therefore that planet has four suns. Darkest exoplanet spotted by astronomers 12 August 2011Last updated at 11:09 By Jason Palmer Science and technology reporter, BBC News TrES-2b is literally darker, on average, than coal A dark alien world, blacker than coal, has been spotted by astronomers. The Jupiter-sized planet is orbiting its star at a distance of just five million km, and is likely to be at a temperature of some 1200C. The planet may be too hot to support reflective clouds like those we see in our own Solar System, but even that would not explain why it is so dark. The research will be published in the journal Monthly Notices of the Royal Astronomical Society. The planet, called TrES-2b, is so named because it was first spotted by the Trans-Atlantic Exoplanet Survey in 2006. It also lies in the field of view of the Kepler space telescope, whose primary mission is to spot exoplanets using extremely sensitive brightness measurements as far-flung worlds pass in front of their host stars. 'Exotic chemistry' Continue reading the main story

Planetary science Planetary science (rarely planetology) is the scientific study of planets (including Earth), moons, and planetary systems, in particular those of the Solar System and the processes that form them. It studies objects ranging in size from micrometeoroids to gas giants, aiming to determine their composition, dynamics, formation, interrelations and history. It is a strongly interdisciplinary field, originally growing from astronomy and earth science,[1] but which now incorporates many disciplines, including planetary astronomy, planetary geology (together with geochemistry and geophysics), atmospheric science, oceanography, hydrology, theoretical planetary science, glaciology, and exoplanetology.[1] Allied disciplines include space physics, when concerned with the effects of the Sun on the bodies of the Solar System, and astrobiology. There are interrelated observational and theoretical branches of planetary science. History[edit] Disciplines[edit] Planetary astronomy[edit] Geomorphology[edit]

Exoplanet HD 189733b Determined to be Color Blue Like the Earth A planet discovered in 2005 in the constellation of Vulpecula (the Fox) was determined to be colored blue with the help of the NASA/ESA Hubble Space Telescope. The blue colored planet is similar to how the Earth's color looks like from space. The planet, HD 189733b which is a huge gas giant similar to the planet Jupiter, is 63 light years away and is closely orbiting its host star; around 1/30 the distance the Earth orbits the Sun. Although the planet comes off with a deep cobalt blue color, its atmosphere is vastly different from that of the Earth. The HD 189733b's atmosphere has a temperature of over 1000 degrees Celsius, and it rains glass, sideways, in howling 7000 kilometre-per-hour winds. HD 189733b is slightly bigger than the planet Jupiter. Scientists have determined that the blue color of the planet is because of silicate particles in its atmosphere which scatters blue light. But that's where the similarities end. Video: Hubble Telescope Discovers Blue planet HD 189733b

Nearby Alien Planet May Be Capable of Supporting Life A newfound alien world might be able to support life — and it's just a stone's throw from Earth in the cosmic scheme of things. An international team of astronomers has discovered an exoplanet in the star Gliese 832's "habitable zone" — the just-right range of distances that could allow liquid water to exist on a world's surface. The planet, known as Gliese 832c, lies just 16 light-years from Earth. (For perspective, the Milky Way galaxy is about 100,000 light-years wide; the closest star to Earth, Proxima Centauri, is 4.2 light-years away.) Gliese 832c is a "super-Earth" at least five times as massive as our planet, and it zips around its host star every 36 days. But that host star is a red dwarf that's much dimmer and cooler than our sun, so Gliese 832c receives about as much stellar energy as Earth does, despite orbiting much closer to its parent, researchers said. [10 Exoplanets That Could Host Alien Life] Gliese 832c is the second planet to be discovered around the star Gliese 832.

10 Exoplanets That Could Host Alien Life Credit: PHL @ UPR Arecibo, ESA/Hubble, NASAAs of April 2014, the Habitable Exoplanets Catalog lists 21 planets that have the best chance for life beyond our solar system. Not all of these planets are confirmed, and there's still a lot to learn about their environments. But the catalog gives astrobiologists a great place to start when talking about life beyond Earth. Here's a list of 10 of the planets we know of that are most likely to host alien life, according to the University of Puerto Rico at Arecibo.