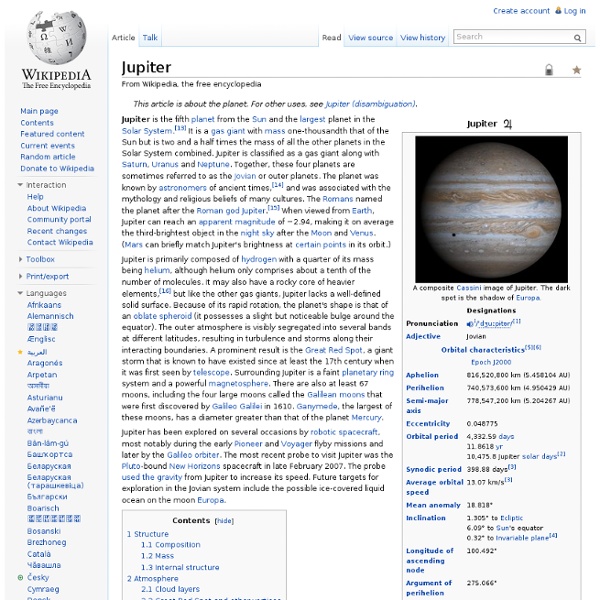 Structure Jupiter is composed primarily of gaseous and liquid matter. It is the largest of four gas giants as well as the largest planet in the Solar System with a diameter of 142,984 km (88,846 mi) at its equator. The density of Jupiter, 1.326 g/cm3, is the second highest of the gas giants, but lower than for any of the four terrestrial planets. Composition Jupiter's upper atmosphere is composed of about 88–92% hydrogen and 8–12% helium by percent volume or fraction of gas molecules. Based on spectroscopy, Saturn is thought to be similar in composition to Jupiter, but the other gas giants Uranus and Neptune have relatively much less hydrogen and helium.[21] Because of the lack of atmospheric entry probes, high-quality abundance numbers of the heavier elements are lacking for the outer planets beyond Jupiter. Mass Jupiter's diameter is one order of magnitude smaller (×0.10045) than the Sun, and one order of magnitude larger (×10.9733) than the Earth. Internal structure Atmosphere Cloud layers

Mars Animation of Mars' rotation from the vantage of an observer who moves south, then north, to hover over both poles, showing the planet's major topographic features. Mars is currently host to five functioning spacecraft: three in orbit – the Mars Odyssey, Mars Express, and Mars Reconnaissance Orbiter – and two on the surface – Mars Exploration Rover Opportunity and the Mars Science Laboratory Curiosity. Defunct spacecraft on the surface include MER-A Spirit and several other inert landers and rovers such as the Phoenix lander, which completed its mission in 2008. Observations by the Mars Reconnaissance Orbiter have revealed possible flowing water during the warmest months on Mars.[25] In 2013, NASA's Curiosity rover discovered that Mars' soil contains between 1.5% and 3% water by mass (about two pints of water per cubic foot or 33 liters per cubic meter, albeit attached to other compounds and thus not freely accessible).[26] Physical characteristics Size comparison of Earth and Mars.

Jupiter  l  Jupiter facts, pictures and information. The Bringer of Jollity Jupiter is the fifth planet from the Sun and by far the largest. Jupiter is more than twice as massive as all the other planets combined (the mass of Jupiter is 318 times that of Earth). orbit: 778,330,000 km (5.20 AU) from Sun diameter: 142,984 km (equatorial) mass: 1.900e27 kg Jupiter (a.k.a. An Organic ocean on Jupiter's Moon europa? If you went by news coverage alone, you’d think there’s only one world in the solar system aside from Earth worth studying—and that, of course, is Mars. NASA’s Curiosity rover is inching its way across the Red Planet’s Gale Crater; the Opportunity rover has entered its tenth year of exploration in a region some 5,000 miles (8,000 km) away; and a new rover, named InSight, is on the schedule for a 2016 launch. Why all that attention?

Saturn Saturn's interior is probably composed of a core of iron, nickel and rock (silicon and oxygen compounds), surrounded by a deep layer of metallic hydrogen, an intermediate layer of liquid hydrogen and liquid helium and an outer gaseous layer.[15] The planet exhibits a pale yellow hue due to ammonia crystals in its upper atmosphere. Electrical current within the metallic hydrogen layer is thought to give rise to Saturn's planetary magnetic field, which is weaker than Earth's magnetic field but has a magnetic moment 580 times that of the Earth due to Saturn's larger body radius. Saturn's magnetic field strength is around one-twentieth the strength of Jupiter's.[16] The outer atmosphere is generally bland and lacking in contrast, although long-lived features can appear. Wind speeds on Saturn can reach 1,800 km/h (1,100 mph), faster than on Jupiter, but not as fast as those on Neptune.[17]

Jupiter – Facts and Information about the Planet Jupiter Jupiter is the largest planet in the solar system. Fittingly, it was named after the king of the gods in Roman mythology. In a similar manner, the ancient Greeks named the planet after Zeus, the king of the Greek pantheon. Jupiter helped revolutionize the way we saw the universe and ourselves in 1610, when Galileo discovered Jupiter's four large moons — Io, Europa, Ganymede and Callisto, now known as the Galilean moons. Jupiter, Jupiter Information Jovian Giant The most massive planet in our solar system, with four planet-size moons and many smaller satellites, Jupiter forms a kind of miniature solar system. Jupiter resembles a star in composition. In fact, if it had been about eighty times more massive, it would have become a star rather than a planet.

Uranus Uranus is the seventh planet from the Sun. It has the third-largest planetary radius and fourth-largest planetary mass in the Solar System. Uranus is similar in composition to Neptune, and both are of different chemical composition than the larger gas giants Jupiter and Saturn. For this reason, astronomers sometimes place them in a separate category called "ice giants". Jupiter Facts - PlanetFacts.net Jupiter is the largest planet in our Solar System. Ancient Astronomers named Jupiter after the king of the Roman Gods. Jupiter is the 5th closest planet to our sun. The atmosphere of Jupiter consists of about 84 percent Hydrogen and about 15 percent helium, with small amounts of acetylene, ammonia, ethane, methane, phosphine, and water vapor. Jupiter Facts You Might Not Know About If you weigh 100 pounds on Earth, you would weigh 264 pounds on Jupiter.

Jupiter - The Planet Jupiter - Jupiter For Kids Figure 1: Distance from Sun showing how The Earth is closer to the Sun than it is to Jupiter. Alternate Images of Jupiter Earth Earth is the third planet from the Sun. It is the densest and fifth-largest of the eight planets in the Solar System. It is also the largest of the Solar System's four terrestrial planets. JUPITER - ENCHANTED LEARNING SOFTWARE Jupiter is the fifth and largest planet in our solar system. This gas giant has a thick atmosphere, 39 known moons, and a dark, barely-visible ring. Its most prominent features are bands across its latitudes and a great red spot (which is a storm). Jupiter is composed mostly of gas.

Interesting Facts About Jupiter Want to stay on top of all the space news? Follow @universetoday on Twitter Think you know everything about Jupiter? Think again.