Madeleine-albright-best-advice. This week, the Cut is talking advice — the good, the bad, the weird, and the pieces of it you really wish you would have taken. 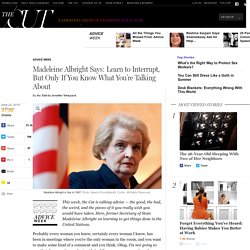 Here, former Secretary of State Madeleine Albright on learning to get things done in the United Nations. Probably every woman you know, certainly every woman I know, has been in meetings where you're the only woman in the room, and you want to make some kind of a comment and you think, Okay, I'm not going to say that, because it sounds stupid. And then some man says it, and everybody thinks it's completely brilliant, and you're really mad at yourself for not having spoken. I had that experience most of my life. I went up to the U.N. in February 1993, as the ambassador of the United States. I'm not a shrink, I'm an observer, and I have my own life to judge by, but I think there is a sense about women that we want to be liked. 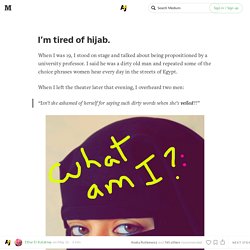 When I was 19, I stood on stage and talked about being propositioned by a university professor. I said he was a dirty old man and repeated some of the choice phrases women hear every day in the streets of Egypt. When I left the theater later that evening, I overheard two men: “Isn’t she ashamed of herself for saying such dirty words when she’s veiled?!” Fast forward five years. “You know, we’re doing you a favor.We’re helping you take that symbol of oppression off your head.”

I’m tired of being the token “omg-look-such-an-articulate-awesome-non-stereotypical hijabi!” It’s been a long, hard slog. I did theater. (If you’re interested, the project I loved most is crowdfunding here.) But then I was done. I was over having to constantly justify my choices.I was over preaching to the choir.I was over having to prove something.

I realized being thought of as “amazing” was actually insulting.Because the assumption was that being veiled meant I was stupid and very non-amazing. This Teacher Taught His Class A Powerful Lesson About Privilege. #DudesGreetingDudes Is One Guy's Flawless Takedown Of Catcalling. Jessica's Feminized Atmosphere. Asian woman turns the tables with "White Fetish" Meet The Generation Of Incredible Native American Women Fighting To Preserve Their Culture. Native Americans represent just one per cent of the US population and some languages have only one speaker left. 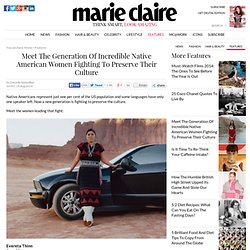 Now a new generation is fighting to preserve the culture. Meet the women leading that fight: Evereta ThinnAge: 30 Tribe Affiliation: Diné (Navajo) Occupation: Administrator at a Shonto School District When Evereta entered college as the only Native American in her English 101 class, it was at that moment she realized that she needed to speak up and not be that stereotypical 'shy' Indian that keeps to herself. She started bywriting an essay in that very class about living in 'two worlds'; living in the traditional world and living in the modern world and how Native Americans need to find that balance in today’s society. Alayna Eagle Shield (left) and Tonia Jo Hall (right) Age: 24 Tribe Affiliation: Lakota & Arikara Occupation: Teacher in the Lakota Language Nest Head Start program/Medical student Growing up, Shawn was severely shy and timid. Juanita C. Nadia Kamil Does Burlesque. When You Sexualize Men And Women Equally, It’s Amazing How Much Fun You Can Have.

This is What Everyday Sexism Feels Like…to a Man. NAILED IT: This Ad Calls Out 5 Ridiculous Double Standards Women Face In Less Than 60 Seconds. Bully Calls News Anchor Fat, News Anchor Destroys Him On Live TV. This Ad From India Shows Men Exactly How Creepy They Are When They Stare At Women On The Street.