Nathalie Miebach: sculpture. My work focuses on the intersection of art and science and the visual articulation of scientific observations. 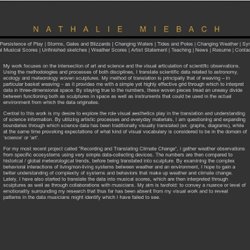 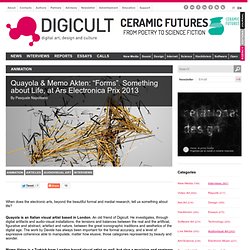 Something about Life, at Ars Electronica Prix 2013 Animation Articles Audiovisual Art Interviews When does the electronic arts, beyond the beautiful formal and medial research, tell us something about life? Sound Tree Rings - MAT 200A 2011. By Yoon Chung Han Sound Tree Rings is an on-going project that focuses on representative image of urban sound, recall the old time when the tree was covered in current urban area and bring visualization of recorded invisible sound in tree rings form. 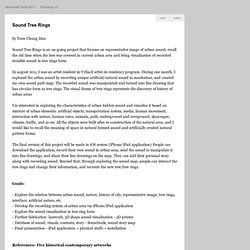 In august 2011, I was an artist resident in Vytlacil artist-in-residency program. During one month, I explored the urban sound by recording unique artificial/natural sound in manhattan, and created my own sound path map. The recorded sound was manipulated and turned into line drawing that has circular form as tree rings. The visual theme of tree rings represents the discovery of history of urban areas I'm interested in exploring the characteristics of urban hidden sound and visualize it based on mixture of urban elements: artificial objects, transportation system, media, human movement, interaction with nature, human voice, animals, path, underground and overground, skyscraper, climate, traffic, and so on. 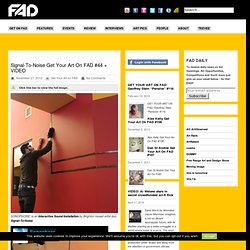 The short film was made in China over the course of the year, all while trying to keep the production under wraps and away from the attention of government officials. Miebach and Posavec - Data, Visualization, Poetry and Sculpture. Visualizations are created to make data more legible. 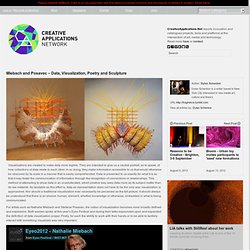 They are intended to give us a neutral portrait, so to speak, of how collections of data relate to each other. In so doing, they make information accessible to us that would otherwise be obscured by its scale in a manner that is easily comprehended. Data is presented to us exactly for what it is so that it may foster the communication of information through the recognition of connections or relationships. This method of attempting to show data in an unadulterated, albeit creative way sees data more as its subject matter than its raw material.

As laudable as this effort is, data as representation does not have to be the only way visualization is approached. For artists such as Nathalie Miebach and Stefanie Posavec, the notion of visualization becomes more broadly defined and expressive. For Miebach the inability to touch a visualization or to fully explore it with the contours of her hand made it difficult to truly comprehend. Weather Bracelet - 3D Printed Data-Jewelry. Given my rantings about digital materiality and transduction, fabrication is a fairly obvious topic of interest. 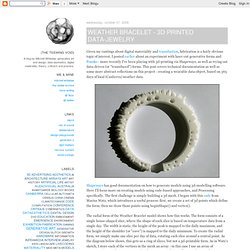 I posted earlier about an experiment with laser-cut generative forms and Ponoko - more recently I've been playing with 3d-printing via Shapeways, as well as trying out data-driven (or "transduced") forms. This post covers technical documentation as well as some more abstract reflections on this project - creating a wearable data-object, based on 365 days of local (Canberra) weather data. Shapeways has good documentation on how to generate models using 3d-modelling software. Here I'll focus more on creating models using code-based approaches, and Processing specifically. The first challenge is simply building a 3d mesh. The radial form of the Weather Bracelet model shows how this works. To save the geometry, I used Guillame laBelle's wonderful SuperCad library to write an .obj file.

The next step in this process was integrating rainfall into the form. News Knitter. What is News Knitter? News Knitter is a data visualization project which focuses on knitted garments as an alternative medium to visualize large scale data. The production of knitted garments is a highly complex process which involves computer support at various steps starting with the designs of both the fabric and the shape of garments until they are ready-to-wear. In recent years, technical innovations in machine knitting have especially focused on the patterning facilities. The patterns are designed by individuals generally depending on the current trends of fashion and the intended target markets and multiplied through mass production. News Knitter translates this individual design process into a world-wide collaboration by utilizing live data streams as a base for pattern generation. News Knitter converts information gathered from the daily political news into clothing.

The exhibition consists of ten unique sweaters that are produced as sample outputs of the News Knitter project. DATAFOUNTAIN - Money currency rates displayed with an internet enabled water fountain. This fountain is connected to money currency rates on the internet. 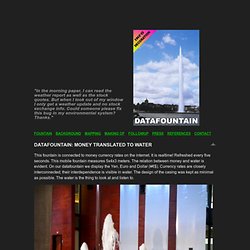 It is realtime! Refreshed every five seconds. This mobile fountain measures 5x4x3 meters. The relation between money and water is evident. On our datafountain we display the Yen, Euro and Dollar (¥€$). Is information technology putting us constantly under pressure or could it also have a calming effect? In natural situations the availability of information is often very well regulated. We are fascinated with fountains, as a phenomenon.